Sabrina Montiel-Soto is a Venezuelan artist residing in Brussels. Her artistic trajectory has been multidisciplinary, venturing into different fields of creation ranging from various audiovisual media to photography, sculpture, and installation. In her work, she performs acute observations of human beings, their intimate and historical context, their daily life, and the re-signification of objects and the various connotations of objects and the world around us. Through a ludic collection of data, Sabrina produces pieces that—»like puzzles»—create stories permeated by her travel experiences, fiction, and a play with absurdity and reality.

Sabrina is beginning her preparation for 2017 and the projects she’s cooking in her home/studio in Brussels. It will take her several months to get ready to create and discover future exhibitions in Brussels and in Maracaibo—during this time, I intentionally crossed along the path of her research process—. We began an exchange in which I aimed to find some clues about how her process begins. Her work results from the intersection of an inquiry into intimate and familiar portraits, the archeology of memory, the purposeful collection of objects, and technical experiments with photography and video.

Sabrina’s works may be, at times, postcards with images of her own making—photographs? that blur the line between analog and digital. At other times, her work is a photographic record of elements found and assembled by her, arranged in front of the camera with minimalist and austere grace.

I was interested in speaking to Sabrina because of the very fine line that divides her intimate staging and the natural and domestic installation of the elements with which she works. Where is the boundary between the sketch of a work, the orchestration of the elements that integrate it, and the final record or image?
We went further back. Through Skype conversations, Sabrina showed me her universe of daily rituals. This set of intimate rituals are reflected directly, both on her works in process and in the final form of her pieces. Some of those rituals include picking a random card from the Marseilles oracle, caring tenderly for the plants of her home, and collecting religious paraphernalia from different parts of the world.

The following images, taken by Sabrina for this publication, offer a window into the rites of an artist who has chosen research as a creation ritual. 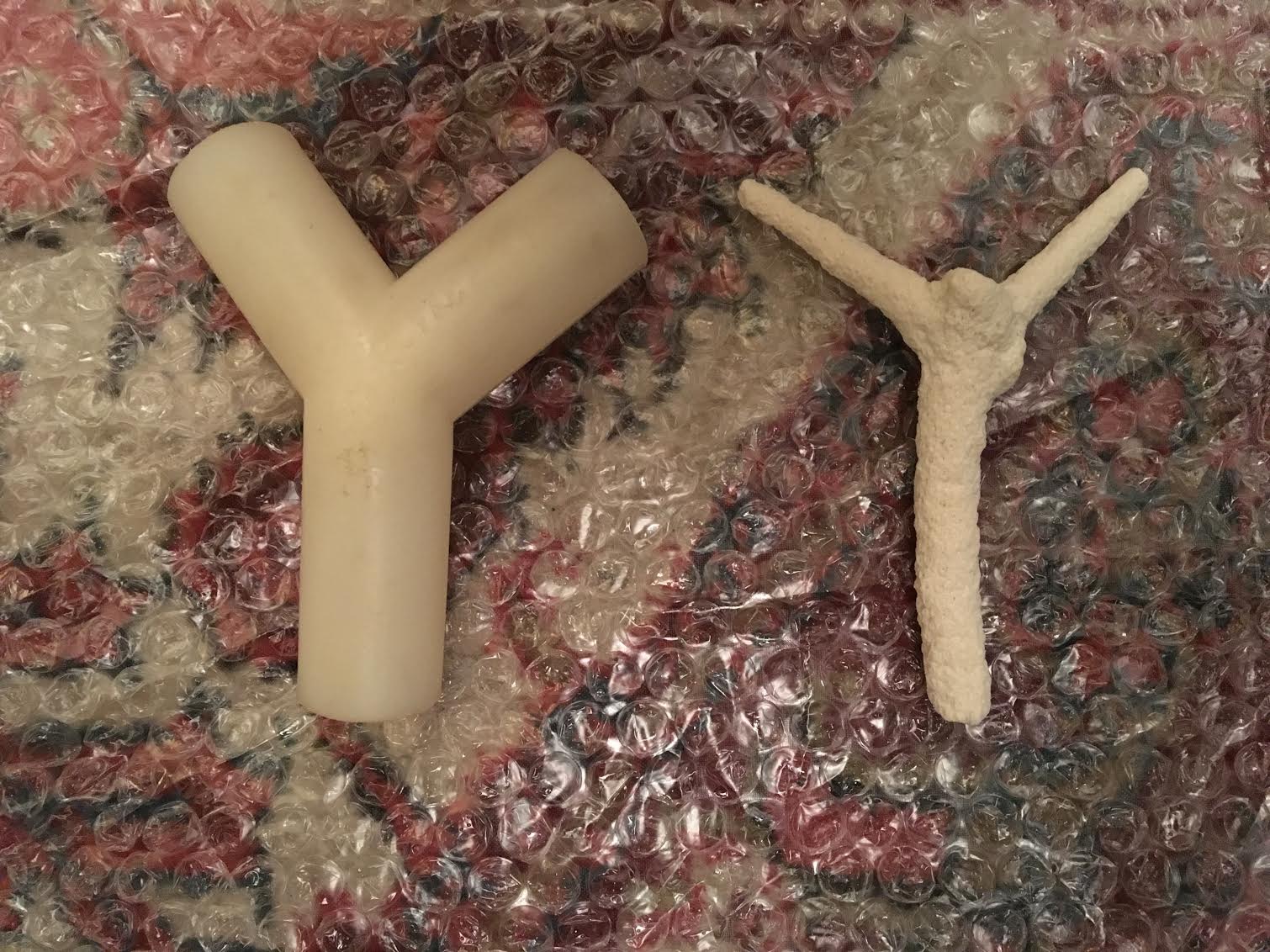 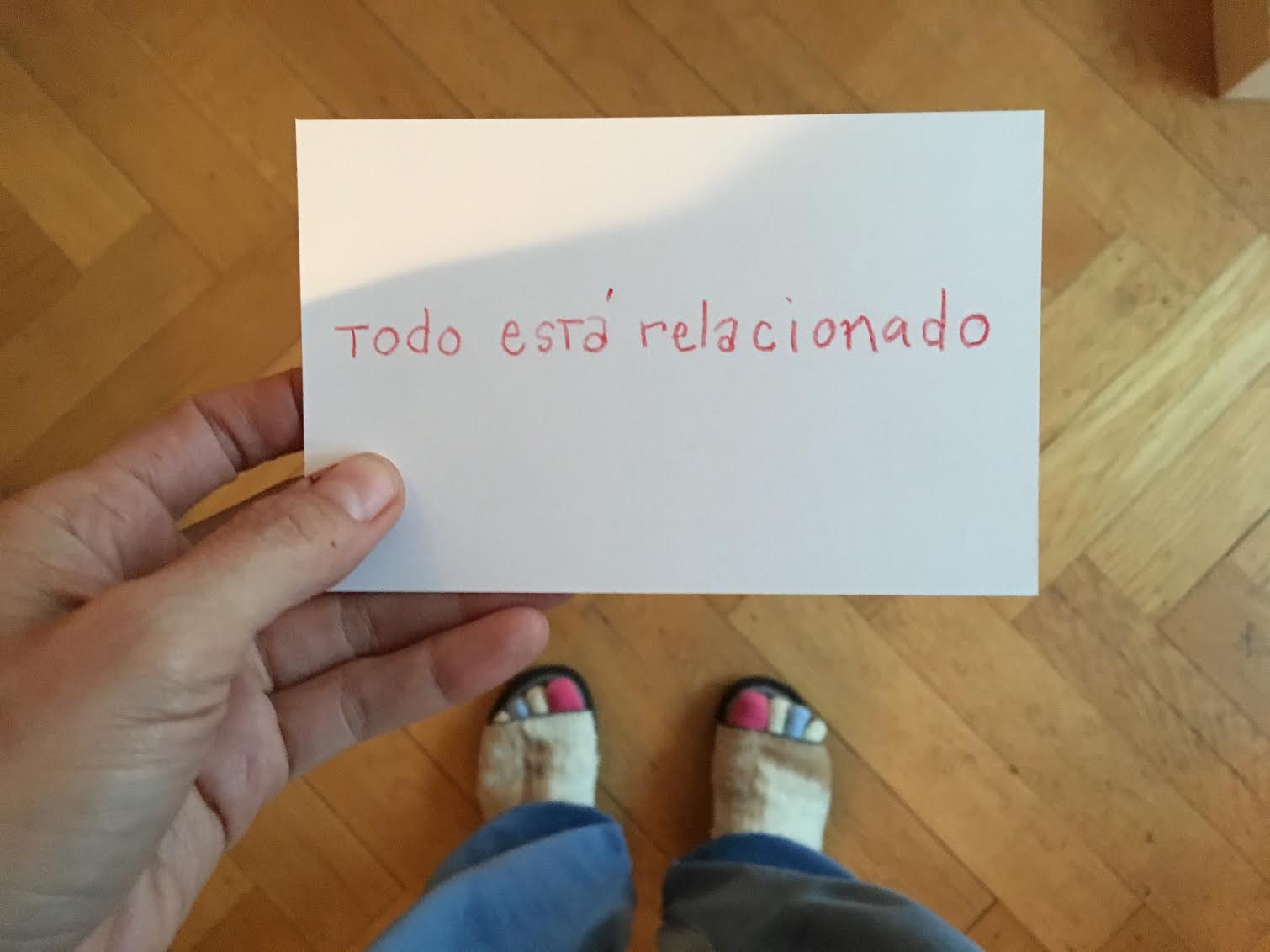 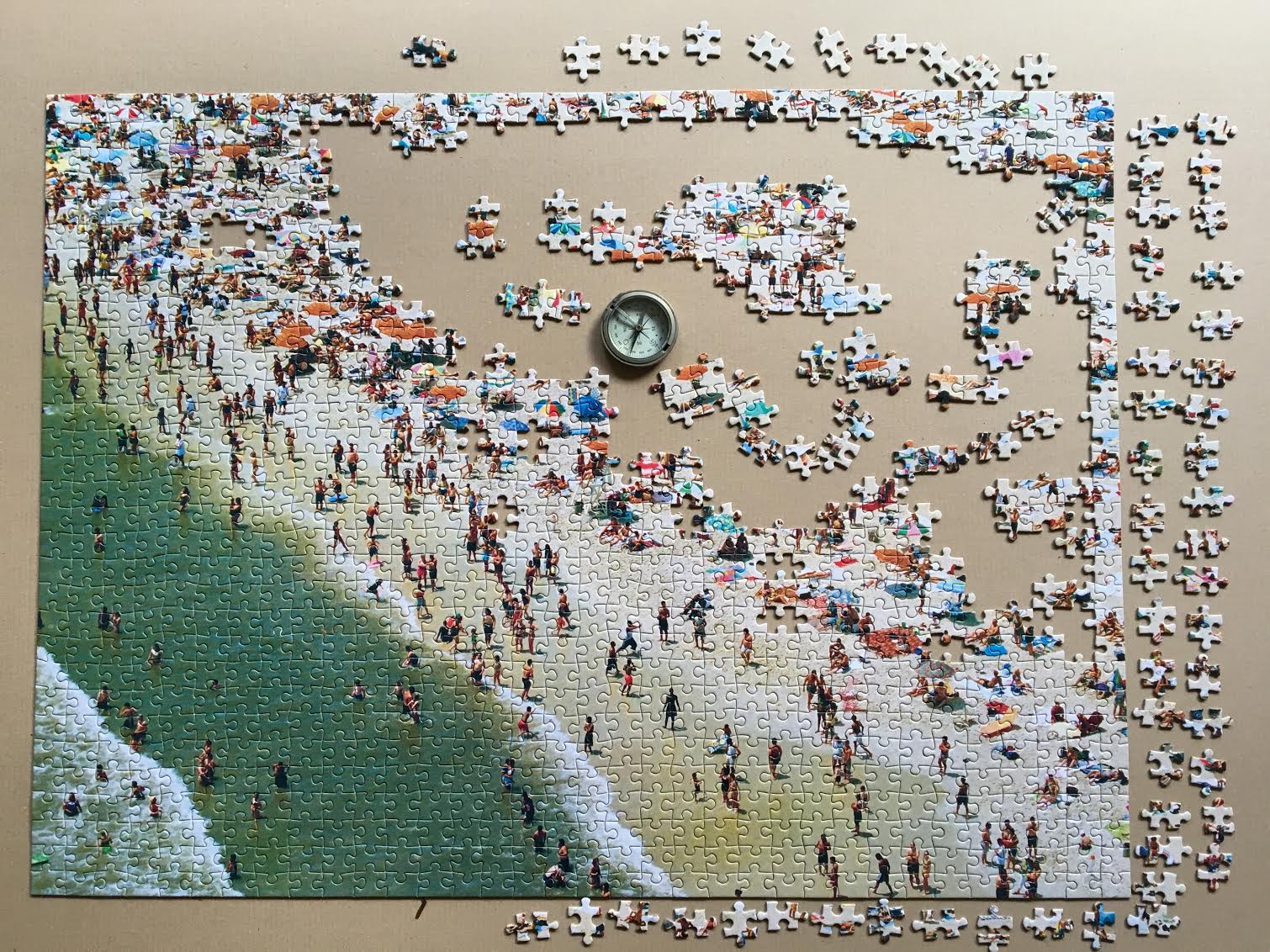 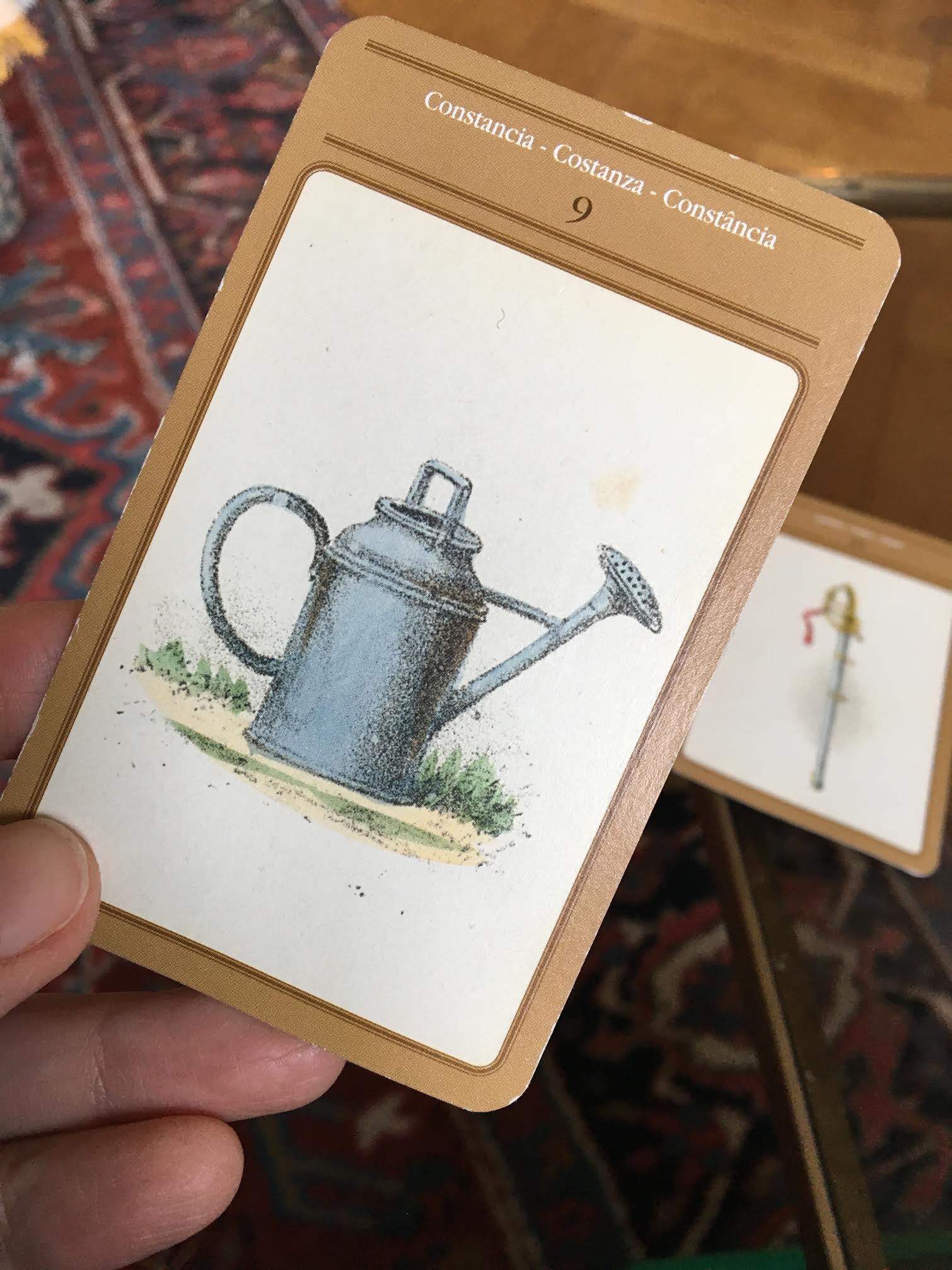 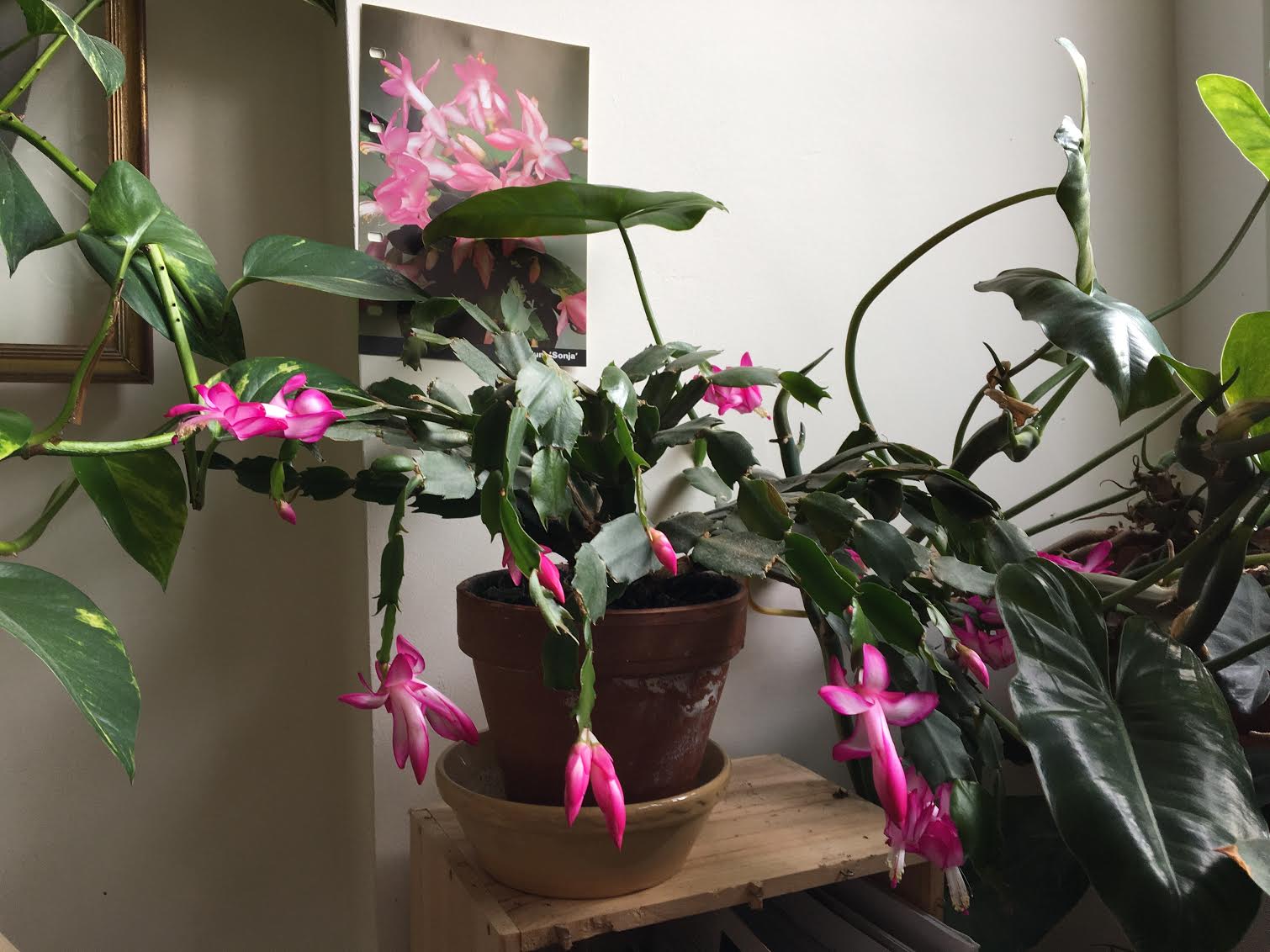 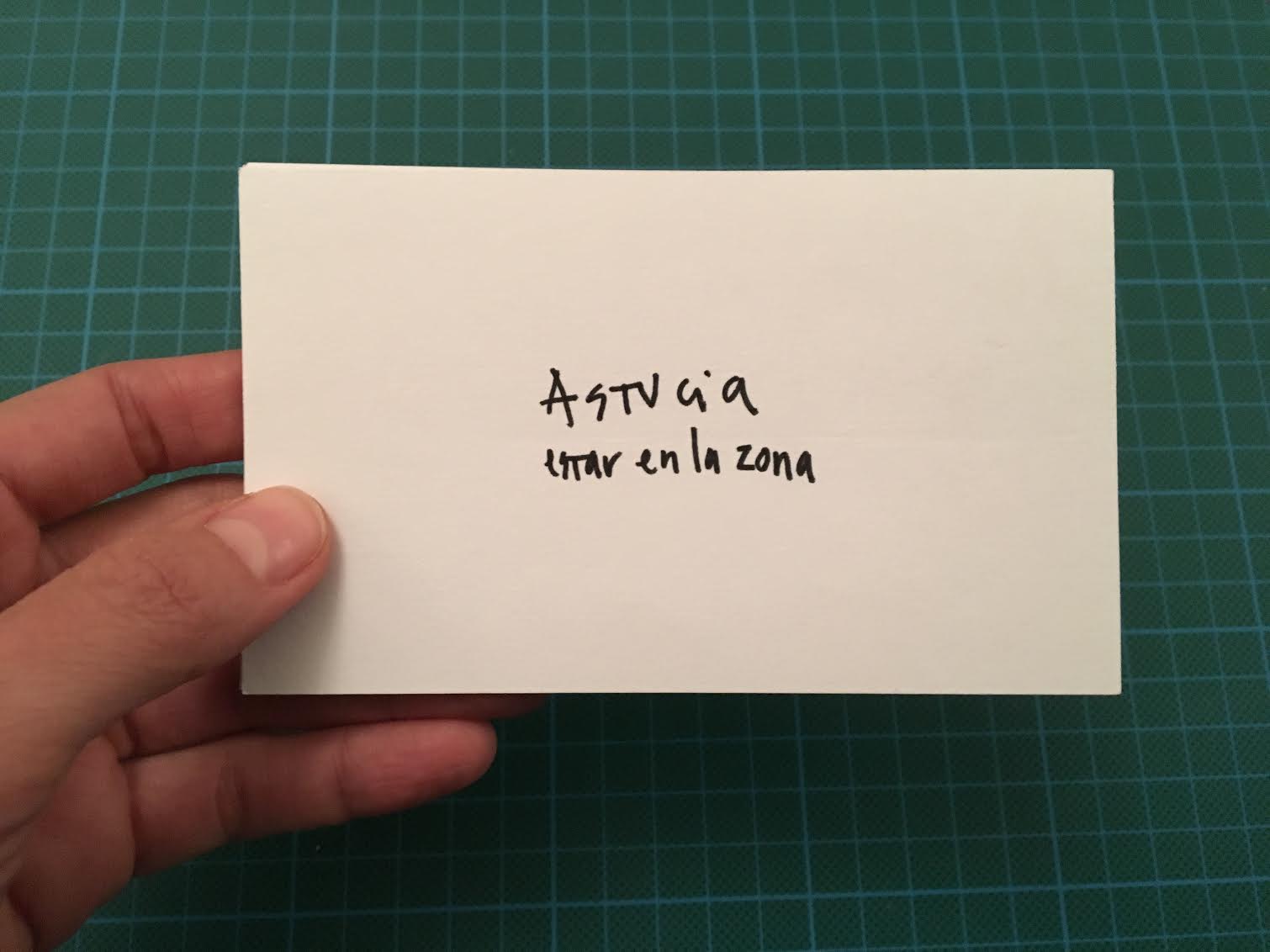 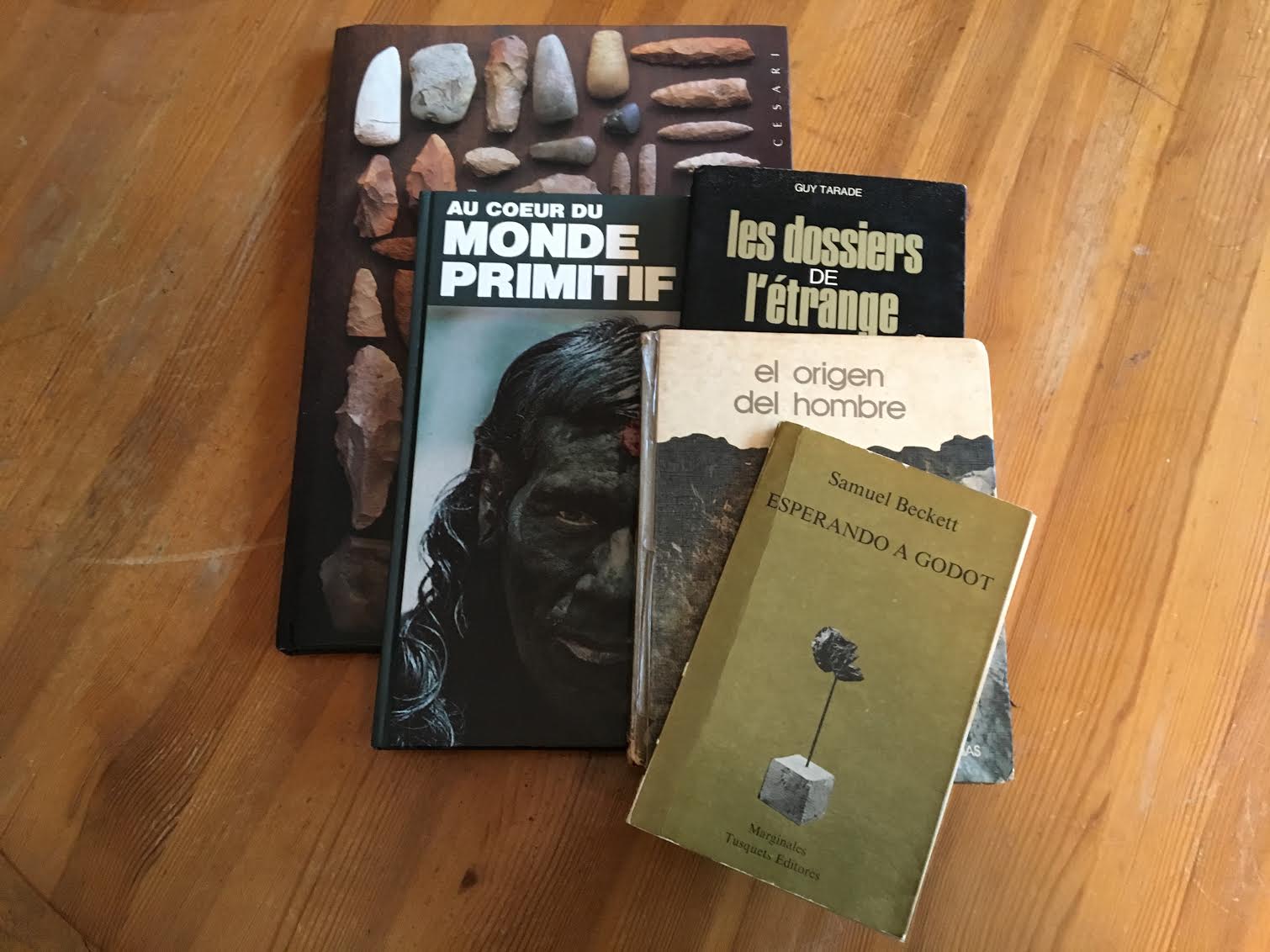 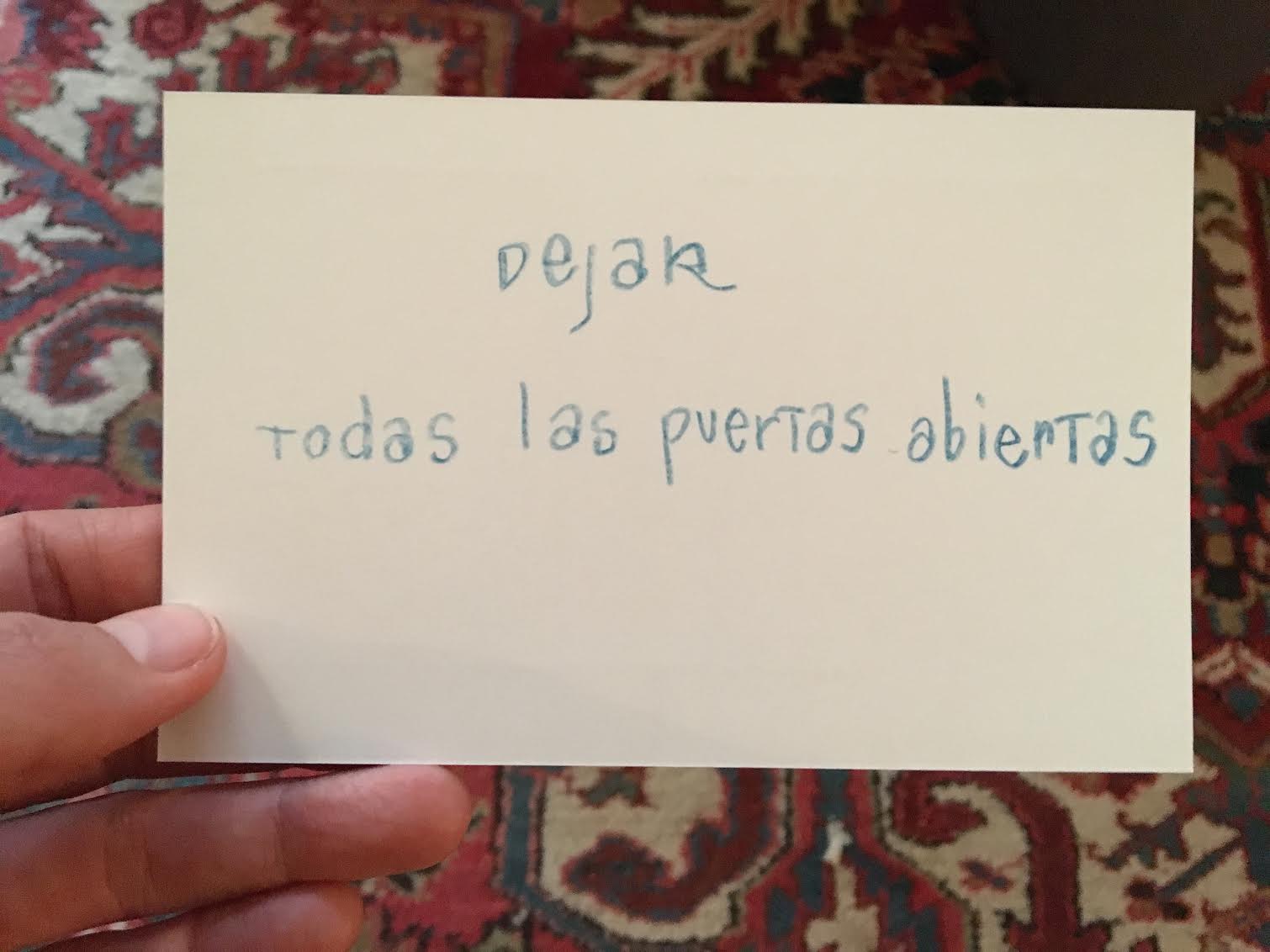 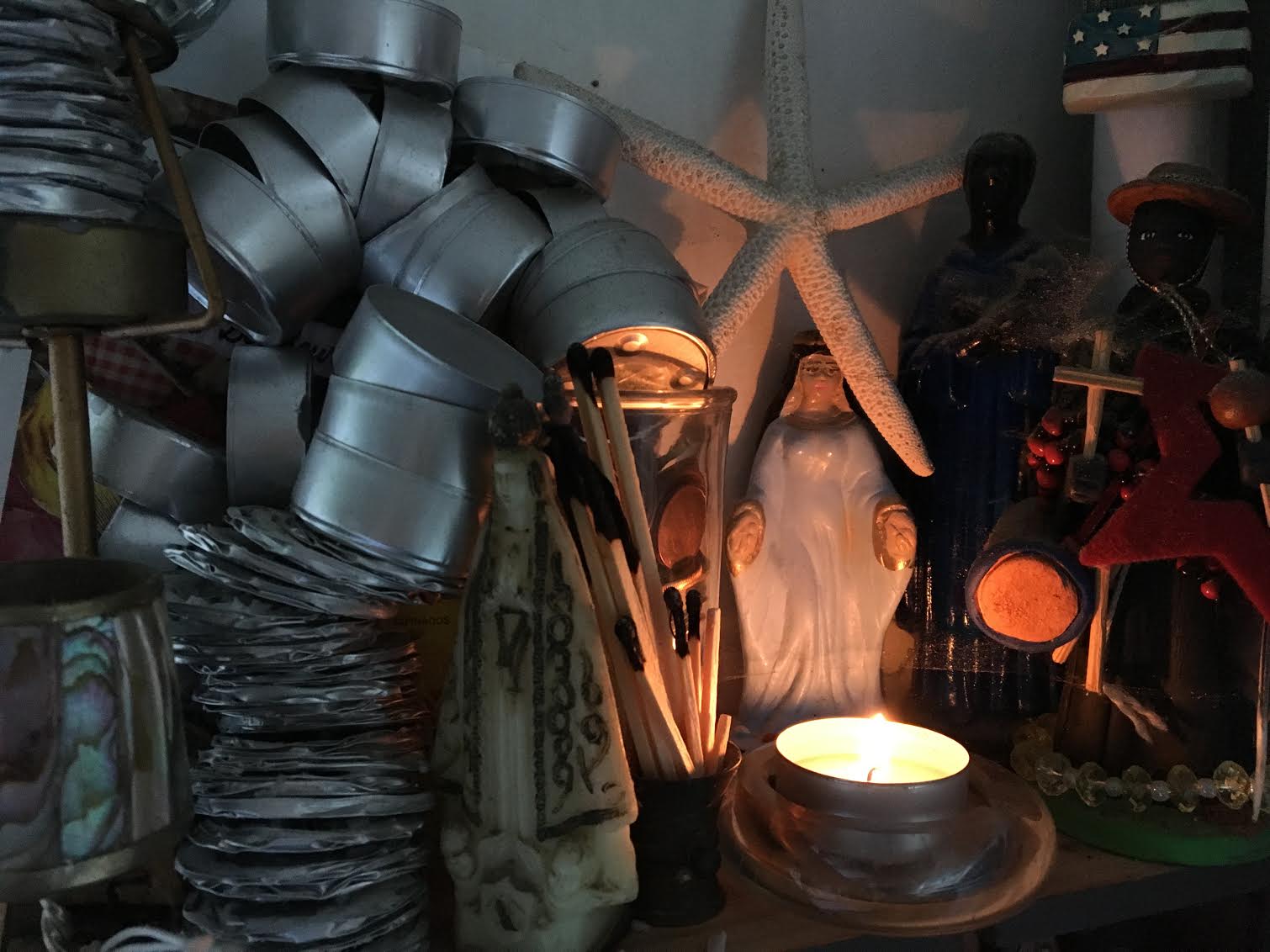 Other notes on Sabrina Montiel-Soto’s process

*The following notes were taken from transcripts of conversations with the artist.

At the time of our exchange, which began in 2016, Sabrina was starting an artistic/research residence at the Royal Museum of Central Africa Tervuren. She went into the Museum twice a week to conduct a full access exploration of the collections, archives, and digital data, as well as classified documents from its library and historical archives. Much of that information is related to the process of Belgium’s colonization of Africa.

Every week, Sabrina heads in the morning out to the outskirts of Brussels in a tram that goes up into the Museum. This great museum has remained closed since 2013 due to a major architectural renovation, and will open its doors again, fully renewed, in June 2018.

The project Sabrina is preparing focuses on Africa’s colonization processes and her personal remembrance of Venezuela (her birthplace). Her own gaze will serve as a crosscut: the gaze of a Venezuelan, emigrant in different countries, artist, and researcher. In her own words, the residence that will give way to her exhibitions is «a project of cultural re-reading, and a re-reading of logics and senses.»

Daily contact with the Museum’s scientists has made her a kind of reporter of small objects and pieces, dialogues, and stories. She sees the work as a deep surface to explore—she is an explorer in the vast world of a Museum—. At the time, Sabrina is very interested in finding analogies of how history is told from science and comparing it with the historical accounts of art. In the same way, I have been a hunter of Sabrina’s process: she researching, me trying to hunt down the silent signs (a term used by scientists to define the non-visible signs of tension between hunter and prey).

There is another tension present in her current search: science, truth, and speculation. Therefore, she is an artist who speculates on the formality of the scientific research she is facing, and on history traversed by fiction and the subjectivity of the creation. A fictional interpretation.

Why display an African mask next to a telephone? Sabrina wonders what the ethnographic object is, and what objects mean in dissimilar contexts. She has discovered ancient objects that she has failed to recognize or identify at first sight, surrendering to the ludic experience of the riddle during the research process. What is this? A spoon-shaped utensil is not a spoon everywhere. A chinchorro (hammock) inside a box is not the best-known resting mechanism—it could be something else for an eye not trained in our context—. Sabrina, as a Venezuelan, studies the many readings of the other and their rituals (and the objects used for such rituals.) It is not just a matter of appreciation of form and utility, but also a question: What is the social and political burden that accompanies the daily history of people and their objects, whether utilitarian or not? It aims at understanding the background behind the shape, especially when faced with unknown objects, even visually.

Sabrina Montiel-Soto is currently in a “descending labyrinth» of documentation, research, and preparation for her next exhibition projects.

Florencia Alvarado is an artist born in Maracaibo, Venezuela. She has been a lecturer for the Patricia Phelps de Cisneros Collection Seminar (2014), as well as in the IV Encontro Pensamento e Reflexão na Fotografia – Museum of Image and Sound of Sao Paulo. She also participated in Triple Canopy’s Summer Publication Intensive (Brooklyn, NY). She was one of the 7 participating artists to make works for the digital chapter of the Segundo Coloquio Latinoamericano de Arte No Objetual y Arte Rural at the Medellin’s Museum of Modern Art (MAMM). Time After Time (MACZUL, Maracaibo, 2016) was her third solo show, and a second iteration was exhibited at Hacienda La Trinidad, Caracas in March of 2017. She was Editor in Chief and Art Director of Backroom Caracas until January 2017.

Sabrina Montiel-Soto (Maracaibo, 1969) is a Venezuelan filmmaker based in Belgium. Her artistic trajectory is multidisciplinary, experimenting in different areas of audio-visual-spatial-temporal creation. In her work, the observation and study of the human dimension and its social and psychological aspects serve as a starting point for the conversion of absurdity and disjunction into banality and reality. Montiel-Soto plays with a «puzzle,» assembling thousands of pieces of possibilities, ranging from the filmic to the sculptural, from insignificance to greatness, from space to perception. Her work is an accomplice in her travels and personal life. 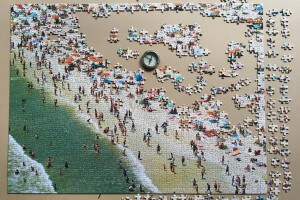 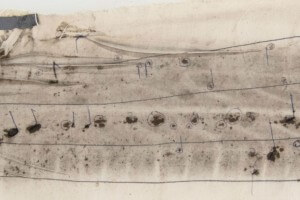