Last Saturday, October 15, at the exhibition Powers Seen and Unseen, curated by Kelly Gordon as part of Global Visions: Insights into International Moving Image Art, we had the pleasant experience of hosting the Micropolitics of Creation, Archives, and the Cities of the Future seminar, together with professor Camila Pulgar Machado. This guided visit through the Hacienda House and the Secadero 7 of Hacienda La Trinidad Parque Cultural provided a space for wonder, doubt, interrogation, and reflection.

We leave you with a selection of impressions written later by the students for the Seminar. 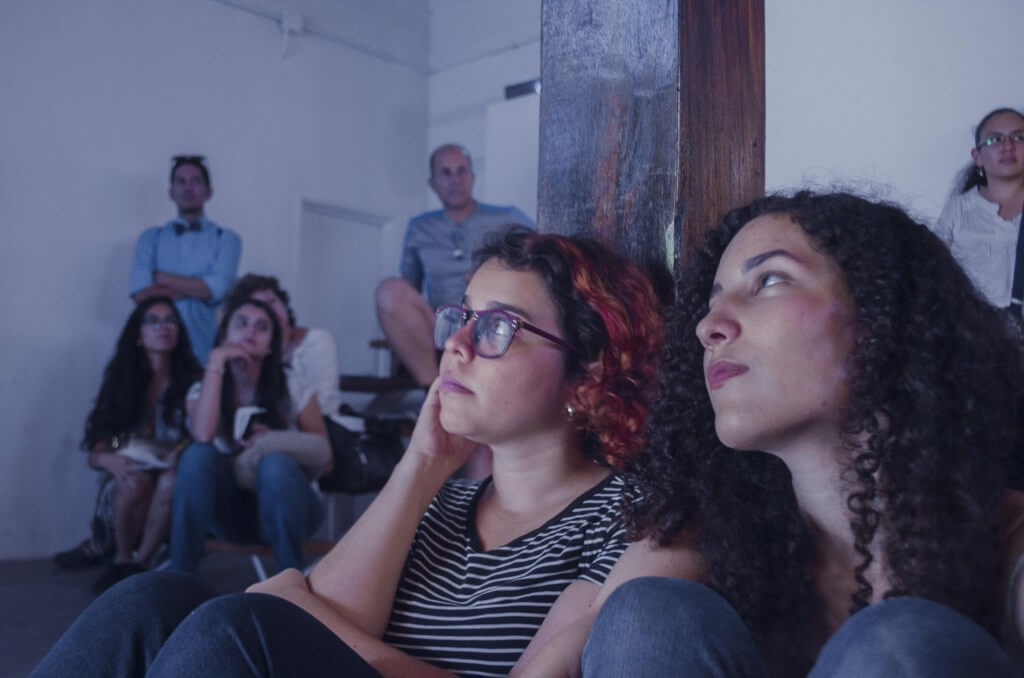 My idea of «power» is not easily separated from a definition based on force. Power and strength frighten me. As I tried to separate one word from the other, my first idea cracked: Are there forces that do not exert power? Is there power that does not employ force? The notion of potentiality appeared like liquid between the cracks. To not have power is not simply to be weak: it is also potentiality.

In the visit to Powers Seen and Unseen I learned to watch video art. It is an image, as in literature, and I recognized it that way because something resonated in me. I recognized the echo that each video produced in some of my inner caves. The morphology of the Hacienda House, in combination with the audio of the videos, gave me the feeling of being in a cave system, in my internal cave system. The confluence or interference of sounds prevented me from immersing myself in the work I was seeing at a certain moment because it brought me back to the ones I had seen, and also to those that had not yet arrived: the resonance of the future. It is curious that, in this metaphor that I attempt to draw, the enduring element is sound, the most ephemeral expression.

Projeto para curvar o corpo (2016), by Carla Chaim, was my favorite. I understand it, in principle, as a reflection on time [the sinister laughter and carnival music of the work of Federico Solmi still (re)sound] that endures on human beings. I observe the brief swell of the river, probably Amazonian, always changing, but always the same, the human and animal tracks erased from the sand by the tide. Then, the border between water and earth is traversed by the woman, who bursts softly, even chromatically, and disappears behind the curve. What is the nature of this tour? It leaves no trace, it is a fragment ––the path comes from somewhere and continues on to somewhere else. It is not violent, but the high-angle view, which gives us the perspective of surveillance, might be. Why monitor a route, a displacement? What is dangerous or destabilizing about it?

Curving, bending the body, leads me to wonder what body is it that we are talking about: the body of the route or the body of the woman? They seem to melt, to amalgamate. This body made of two bodies gives me a feeling of density. Despite its minimalist aesthetics, I feel that this curved diversion movement, which delays the journey that could be done in less time, exerts the invisible power, or potentiality, that opposes visible power ––in this case, that of surveillance. To traverse the boundary between the formal world (the earth) and the informal world (water), not to break but to bend the straight line, reminds me of Tarkovsky’s Stalker: the curve, the delay, the feeling of breaking down, become a necessity. 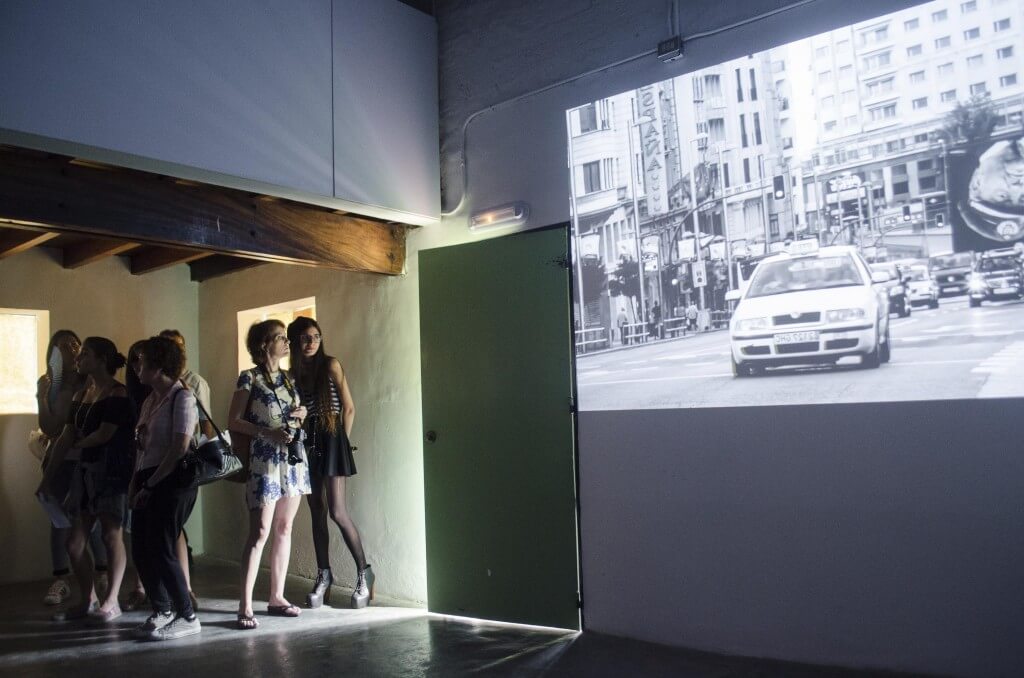 A video art exhibition necessarily demands you sharpen your senses: the eye must carefully follow each movement and go through the screens to find details that could be overlooked at first sight; the ear receives an avalanche of sounds from the soundtracks that artists have adhered to their works. Powers Seen and Unseen awakened in me, as do video art exhibitions, a certain charm, rarity, and uncertainty. During the tour of the exhibition, I could experience tension, despair, and even some guilt when looking at some of the works.

The exhibition greeted me with a psychedelic explosion, unbridled movements clinging to a desk, a walk that is lost on the horizon that marks the edge of the screen, the slowness of a sea route that seemed not to move, the apparent announcement of an attack that never arrives, a childhood game that devastates everything near it, a cry that drowns and ends with the funeral caravan of a new beginning. As I moved from room to room, I felt an excess of visual and auditory information and needed puffs of fresh air between each one to avoid saturation, to mitigate the heat, and to be able to digest the multiplicity of images and rumbling sounds.

Of the selection of videos, my attention was most caught by Nina Pereg’s work 67 Bows (2006): a video that simulates the reaction of a group of flamingos to the sound of gunshots, in which the movements are coupled to the shots and recharges, thus creating a choreography and a reality that recreates the birth of sound and image as an indivisible unit. The sound and the reaction of the flamingos coexist in a masterful way: every detonation and recharge is accompanied by collective movements that infected me as a spectator. At every recharge, I awaited the shots, just like birds. The tension of waiting for a sound that I had become accustomed to in a few seconds settled into my unconscious, along with a slight motion of the neck, which fleetingly joined that of the flamingos. 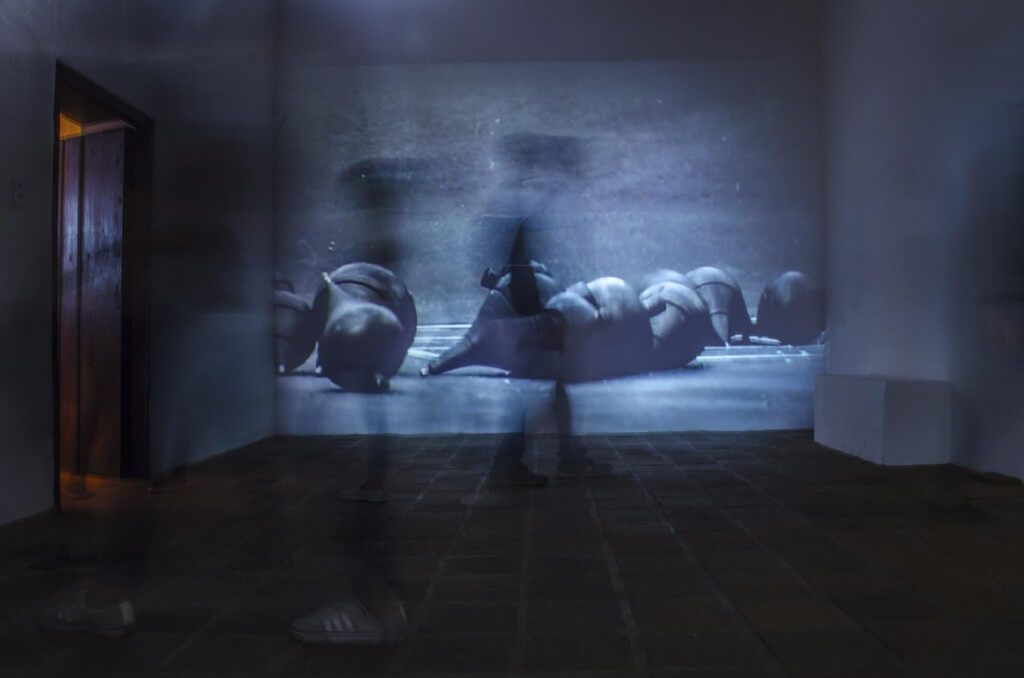 There is a ludic aspect that the pieces of this exhibition share, represented in color or the absence of it, the use of game elements, or the mixing of image and sound. There is a perverse game of predator and prey, the almost sinister game of using infants and suppressing color, giving them the command to shake off what they feel oppresses them. The game of encounter and disagreement, of the conqueror and the conquered ––the one who hides and moves the threads of others.

Between the ludic and the perverse, there is another differentiating aspect: the musicality, or rather, the sonority. All works sound differently, each one has its own rhythm, its own compass. On this basis, a rhythmic, sometimes synchronized movement is choreographed; even in works without audio, where movement creates its own rhythm. The works are an infinite dance loop that absorbs the viewer.

The selection in Powers Seen and Unseen exerts the power that forces a political reflection on the intentions of the artist when creating the work; in each of them, there is an archive or an intimate story. This is how history exerts its invisible power: the artist’s experience conditions the reflection, the obvious power of some works is complemented by the power of the anecdote, of the history, and of the experiential file of oneself and others. All this is to say that my favorite work was that of Miguel Ángel Ríos, A morir (2003), where an unseen hand imposes movement, and objects collide and move inside a white grid. There is an apparent freedom of movement that allows objects to exit and enter the confines of the grid. There are small ones and big ones, some push, some pull, some knock over, some resist falling, some are removed from the game, and some who return to it. The piece reminded me of a quote by Slavoj Žižek from the book Welcome to Interesting Times!: “Who needs direct repression when one can convince the chicken to walk freely into the slaughterhouse?” 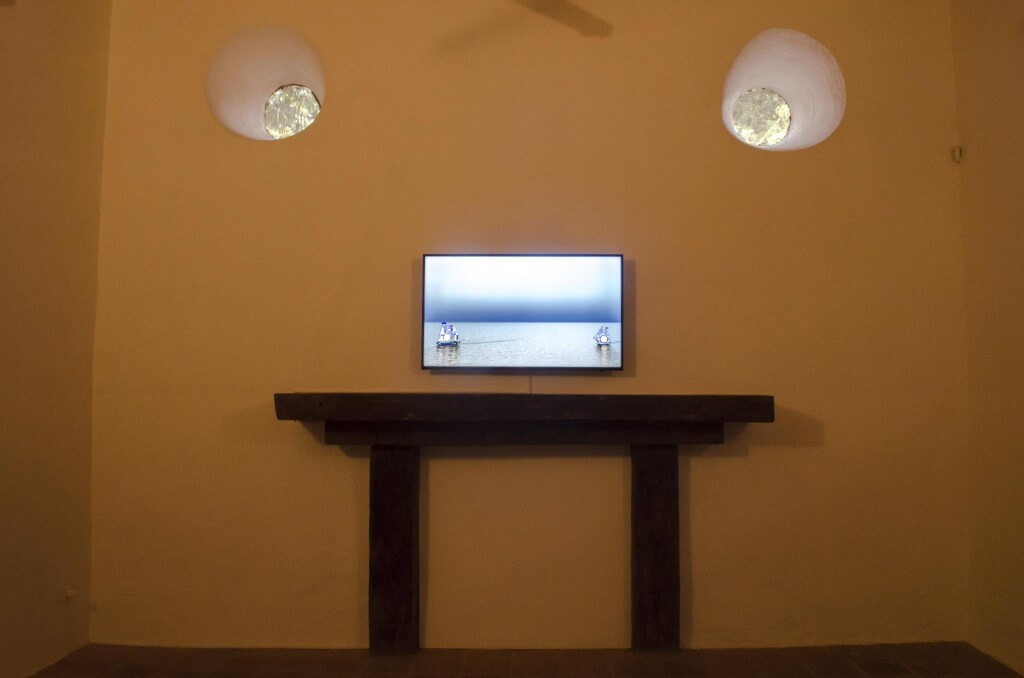 I began my tour through what would, in museographical terms, be the ending, the last room. There, as a first spontaneous and inevitable effect, I sensed the invisible power of the “hidden forces” behind the processes of assembly and exhibition, stemming from my own prejudices cultivated through my personal and work experience in Venezuelan museums. I noticed the irony of a room precariously set to display two impeccably elaborate pieces. I am interested in the power that knows how to constitute itself from the margins.

In the Hacienda House, the beauty of the space, its noble visible materials, as well cared for as its clean white walls, exercised in me the invisible but tremendously sensitive power of contradiction, due to the choking smell of the products used to preserve and lubricate wood and terracotta floors. I am Venezuelan and live in Venezuela, so choking is an everyday occurrence that I resist and which I do not intend to get used to. In response to that, my daily political, instant, and systematic exercise is to remain alert, awake, active, and alive. That is my power, invisible. But it is enough that I know about it to legitimize it.

‘Political’ is not only one who so calls himself by virtue of his office, legitimized by the official and officializing poles of power. The being of each one of us is a deeply political issue ––possibly, the most legitimate and real.

Thus, suffocated, I watched Shaking Children (2013) by Eglè Budvytytè and Bart Groenendaal, the visibilizing exercise of power given to uniformed children in the classroom as an invitation to «agitate» exaggeratedly, artificially, on purpose. This work made me I wonder how many adults might consider that school regulations and the strategy of uniforming, setting and immobilizing children during each hour of conventional class, over nine consecutive years of childhood and, successively, for the next five years of adolescence (in the referent of our Venezuelan educational system) constitutes an exercise of socially naturalized power. How many of us are willing to question it? What is visible and what is invisible power in this work? I liked it.

67 Bows (2006) by Nira Pereg hit me. In this piece, I identified clear sonic, visual, corporeal, and gestural elements of the relationships by which pure and hard power is constituted: the superposition of the sound of weapons on the natural, diverse noise of the beings interacting in their environment. The notion of collectivity as a group of individuals who share similar traits or common needs became altered in fractions of a second by the totalitarian and totalizing gesture of the noise of the shots, which de-individualized the action of the bodies, unifying them in a single corporal gesture of submission. I was moved by this discourse and its representation. 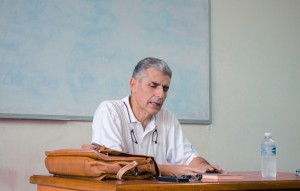 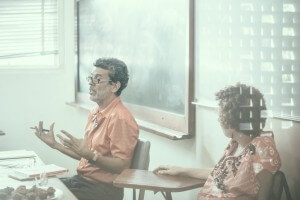