To eclipse the media debate, to distort public opinion, and to open the doors of the inadmissible through critical writing are achievements that can be credited to very few artists. Alejandro Otero, along his journey through the enigmatic territory of art, enjoyed such a status by experiencing critical reflection as part of his creative process.

His affinity for theory was revealed for the first time in the pages of El Nacional in 1957, with the controversy about abstract art; the lucidity of his essays has accompanied us since then. Alejandro Otero focused his attention on the work of Reverón, Cézanne, Soto, Picasso, Monsanto, Marcos Castillo, German Expressionism, British Sculpture, Josef Albers, Mercedes Pardo or Cristóbal Rojas –versatile and challenging essays, like Otero’s own work. Juan Carlos Palenzuela affirms that «towards the end of his existence, [Otero] expressed his eagerness to collect in a single book the texts he had published in the press.” [1]

By the year 1990, his wish would come true. The Caracas Museum of Contemporary Art’s editorial fund decided to compile and publish a selection of Otero’s writings under the title El territorio del arte es enigmático [‘The Territory of Art Is Enigmatic’], motivated by the idea of making a book capable of dialoguing with young people and condensing the theoretical apparatus of the artist. The result is a cult object that puts in check all the other theorists—Marta Traba, Juan Calzadilla, or Carlos Contramaestre—who strived to recognize abstract art as «a magnificent fire of artifice.» [2]

According to the school of Traba, abstract art employs theory as a tool to acquire density and solve the problem of «contradiction.» Alejandro Otero, in assuming the role of theorist, expands the reading of abstractionism to include the life experience and the social context that are charged with filling «forms with meaning»:

When we say «to embody meanings,» we must think of a long path bound to experience, to everything that the artist “processes” in the course of her lifetime: what she retains, clarifies, and matures substantially in her contact with the real world. There lies the background of the contents that are but the deep reasons in which art is grounded, the material that it expresses.[3]

Alejandro Otero is heir to the Platonic reality expressed in the myth of the cavern –an heir convinced that the world of images masks a deep essence attainable through reflection and technical mastery.

The artist, the creator, is a rambler, a wanderer who seems to move backwards to things, as if she did not see them. The truth is that she does not see them. You may have the feeling that she owns them, but it is an illusory possession. The work of the true creator is done blindly.[4]

Consistent with this view, Otero’s belief regarding abstract art sustains that «the subject of abstract art is life, but life as a whole, not reduced to its anecdote or its allegory, not even its symbol» (p.64). Thus, the artist must possess the capacity to comprehend vitality in all its extension, to reject its conventional sign and thus generate a ritual grammar to express it.

To run through the pages of El territorio del arte es enigmático is to encounter, again and again, the idea of the creator as “clarifier”: a sort of alchemist, in charge of decanting and polishing the opaque magma of the real until it is transformed into transparent glass, through which time, the world, and its natural forces can be recognized. This is why he says:

My work is the means I have at my disposal to clarify my situation in the world, my reflection on it, at the same time as my participation in it and the celebration of what I finally imagine and understand of it.[5]

Every great maker is forged by her selection criteria, and must necessarily recognize antonyms for the mode of creation that she materializes and defends. Otero is no exception: in his essays he approaches the theme of «bad painting» and affirms that «the idea of reflection is inherent to good painting, just as conceptual blindness, simplicity, would be to mediocre painting.» In this frame of thought, one understands the deep disdain the artist feels towards experiences like hyperrealism, surrealism or naive art. These currents «continue to anchor their works in the prestige of the image, although that is not where the essential importance that sustains them lies.» (p.44)[6]

Alejandro Otero gave the title of «the burst» to this process of confusion guided by works persuasively obstinate in breaking ties with criticism and thought and abandoning all reflection: an implosion that we may find in the work of the four «cardinal monsters»: Bacon, Dubuffet, Cuevas and De Kooning, accompanied by Jacobo Borges, Carlos Contramaestre and Régulo Pérez.

In order to remain inside the circle of painting, all banalities, the most outlandish and superficial inventions or combinations thereof, are now entering it. All of this has brought about the appearance of a visual nightmare, where there is space for the unimaginable: painters seem to have dedicated themselves to expressing the impossible; it is like a drunkenness, a ‘delirium’ without direction or border, that has invaded everything (…) What is surprising is that the terrain of art seems to have been chosen (it alone) as the appropriate means for the germination of such a state of decomposition.

For Otero, the new figuration is a tactic of enunciation that seeks to present a sick and decomposed sign, a magnificent fire of figures, unable to express the deep reality of things.

The Territory of Art Is Enigmatic

To digitize and make available this book for free was born as an impulse from the sincerity that its reading transmits. El territorio del arte es enigmático is a primary source of abstract art theory in Venezuela, but which also allows the intimate gesture of accompanying Alejandro Otero in a visit to El Castillete and share anecdotes with Reverón, to discover the epiphany that kept him forever tied to painting, or to draw the boundary between art and design: «Something that differentiates a ‘designed’ form from a traditionally created form is that the first could almost be taken to have a ‘divine’ origin, while the second is of uniquely individual or human origin.”

In profound gratitude for Alejandro Otero’s theoretical legacy to humanity, we present this modest digital version of El territorio del arte es enigmático, a formal text that «derives from what it contributes to express and expresses in its highest and strictest specificity» the paths traveled and still left to travel in art. 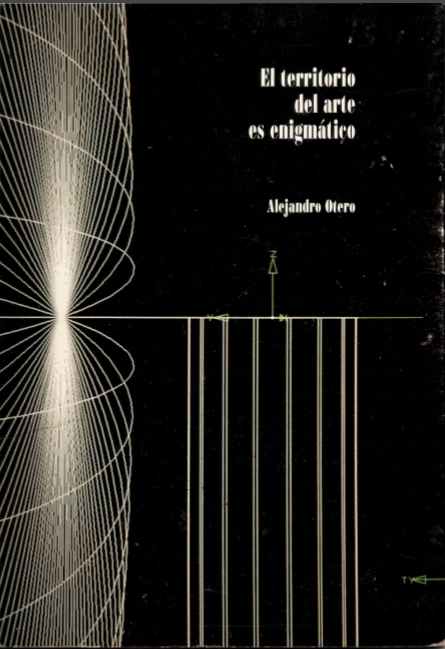 About the author:
Nicolás Gerardi (1989) is a visualist who develops mutant projects that straddle curatorship, live cinema, writing, and digital creation. Nowadays, he and María Isabel Acosta Alfaro manage the blog TEXTVRA.NET. He is devoted to encouraging the rhythm of Caracas through buscatuespacio.com.ve and to cultivating memory through wild investigations.