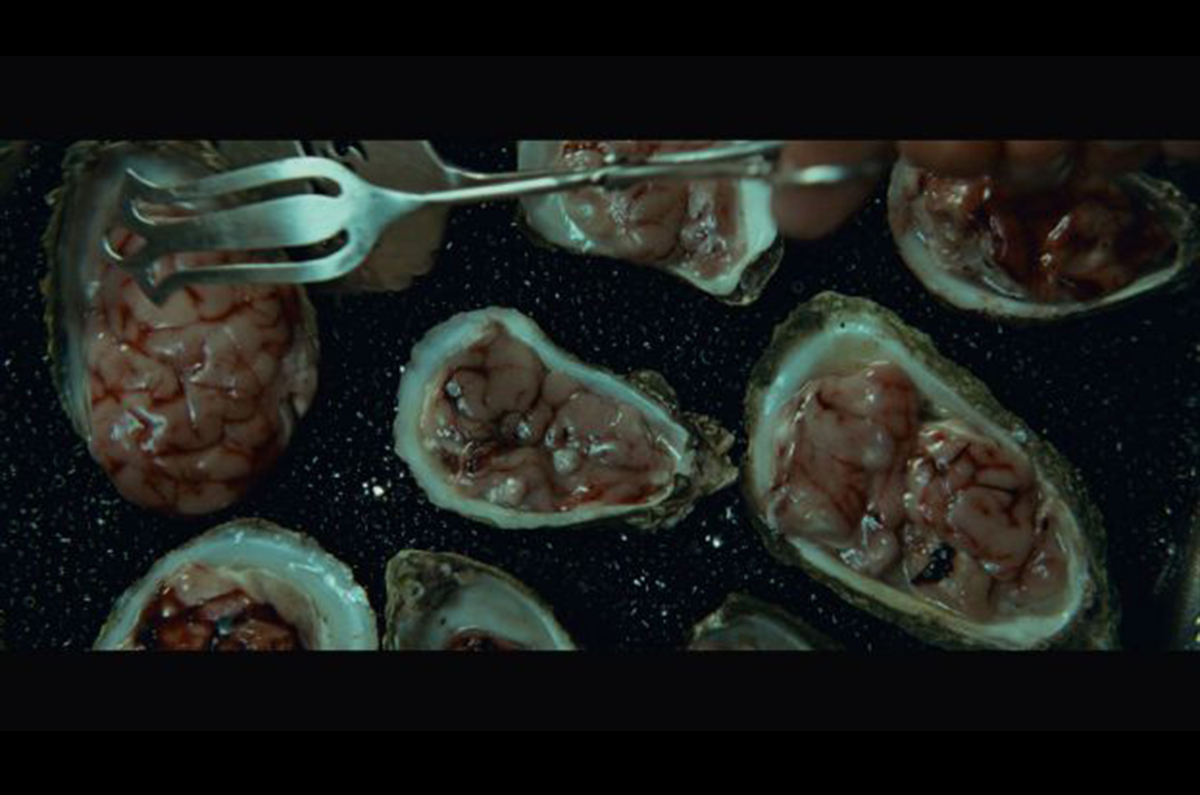 The image of swallowing as a death drive is a poetics that has been around for less than a century. It is true that depictions of men around the banquet are as old as the Egyptian civilization. In the paintings found in the tomb of Nebamun (1400 B.C.)—perhaps one of the most important pictorial records of the time—there’s evidence of the great banquets held on the occasion of marriages, liturgical and funeral acts; however, each of them was about a knotting of life. Throughout the Middle Ages, banquets were a symbol of power and a divine mandate for jouissance. It was around the table that important pacts were sealed, war campaigns were devised, and the regulating discourses of the social spine were plotted. It was the enactment of political power.

The Last Supper (painted by Leonardo Da Vinci between 1495 and 1497) not only is one of the main pictorial icons of the Renaissance, but it is also—and essentially—the inaugural depiction of the death of God—an assertion that Nitzsche would formulate a few centuries later—not at the hands of men, but of politics. Jesus is being bargained to power. This image marks the separation, so to speak, of God as a regulatory discourse of culture and welcomes the Cartesian cogito (I think, therefore I am). This gesture signified the beginning of the modern project led by reason.

Now, who are the characters that make up the text of Next Floor? What is their epochal frame? What power relationships are established among the diners? All is unknown. The first key for its reading is that the universe represented there is cemented in the banquet as a founding image of the political—if we understand the political as the mere establishing of social bonds. The second is that there is, however, something in the text that springs out from the foundations and does speak of an epochal trait, of a way of establishing bonds—namely: consumption.

Even if the relationships of power among the diners are not disclosed—they are all equals in their consumer condition—there is one character that incarnates the exertion of power (what calls “Next floor!”): the hairless man (the market?) with the blatant role: to enable consumption, to cover the demand for food (jouissance?), which is mobilized—and here the visual text finally reveals its sense—by the path of the drive; thus, evidencing the mandate of limitless consumption as a fundamental trait of global contemporaneity.

How far down can the lamp go? The answer, as we learn, is limitless. It ends up (perhaps in the only resolving moment of the storyline) falling down along with the diners through an apparently bottomless hole. It is the ending of a work that shows the material and symbolical degradation of a banquet (a culture?), which undeniably speaks of signifiers of this time.

In 1920, disquieted by the repetition compulsion he observed in the symptomatic manifestations of his patients, Sigmund Freud wondered if maybe there was something beyond the pleasure principle—the regulating principle of the stimuli concerned with gratification—concluding that something did act beyond and it pointed towards a return to an inorganic state, an equalization to zero as a stimulus in the living subject. In other words, it is not enough to eat to live, it is essential to eat to death. That, he called the death drive.

Our banquet is not even a century old, but it finds in the image of consumption the most tenebrously just way for narrating the drive: it is not enough to consume to live, it is essential to consume to death.

Jordi Santiago Flores (Caracas, Venezuela) is a researcher at the Center for Critical and Sociocultural Research of the Universidad Simón Bolívar (CICSC-USB). He is a professor at the School of Arts of the Universidad Central de Venezuela (UCV). He is currently writing his doctoral thesis in the line of Psychoanalysis and Social Sciences of the UCV’s Social Sciences Ph.D. program. His fields of interest orbit psychoanalysis, art, and politics. He is an Associate of the New Lacanian School at Caracas.