We believe that we know something about the things themselves when we speak of trees, colors, snow, and flowers; and yet we possess nothing but metaphors for things–metaphors which correspond in no way to the original entities.

Friedrich Nietzsche, On Truth and Lies in a Nonmoral Sense.

One summer morning, two years ago, I went out to listen and record the sound of the forest that surrounds the house where I live. It’s a Mediterranean forest, about 15 kilometers big from Barcelona in the area of ​​Baix Llobregat, a partially industrialized agricultural area where there are extensions of forest. There’s a project to build a golf course with a hotel for a hundred people and a motorway in this area. In the Baix Llobregat, there was another project: the Eurovegas, a macro-casino that was thought to be exempted of certain laws and fiscal obligations.

That morning’s recording registered the footsteps of a fox hunting a rabbit. They passed without seeing me, about ten feet away. It was the first time I heard there were foxes living within 100 meters of my house, and that there was an animal path coming from the river where I had sat. I don’t know much about the life of foxes, but I felt my heart throb in that moment. From the apparent closeness, I can at least awaken an imaginative, and to some degree empathic, capacity towards the fox. In these economic projects I see death, robotization, the alienation of that empathic capacity and the human imagination towards ourselves, as well as the rest.

Sound recording is one among other attempts to represent this forest. In its poverty, the steps of the fox are recorded the fox is not there. Thus I find myself again with something unfathomable, impossible to draw, film, or name. The forest resists, with its multiple scales, infinity of directions, differences, constant change, visible and hidden life.

Starting from impossibility, I start a continuous drawing project in the forest. I keep a notebook, and from each drawing I make a carbon paper copy that becomes the original, so that the same stroke makes interposed layers visible, each an inaccurate analogy of the next. There are also more direct registers drawn with stones, sticks or other material directly on the carbon paper, blindly imitating the movement of what I see through its space, analogous to the format of drawing. There are rhythms, movements of detachment and approach, lateral movements, changes of scale, changes of register, focus, humor, and perception. And all this according to my own changes. There’s a territory in mortal crisis between me and you, I / we and the world, and I explore it. 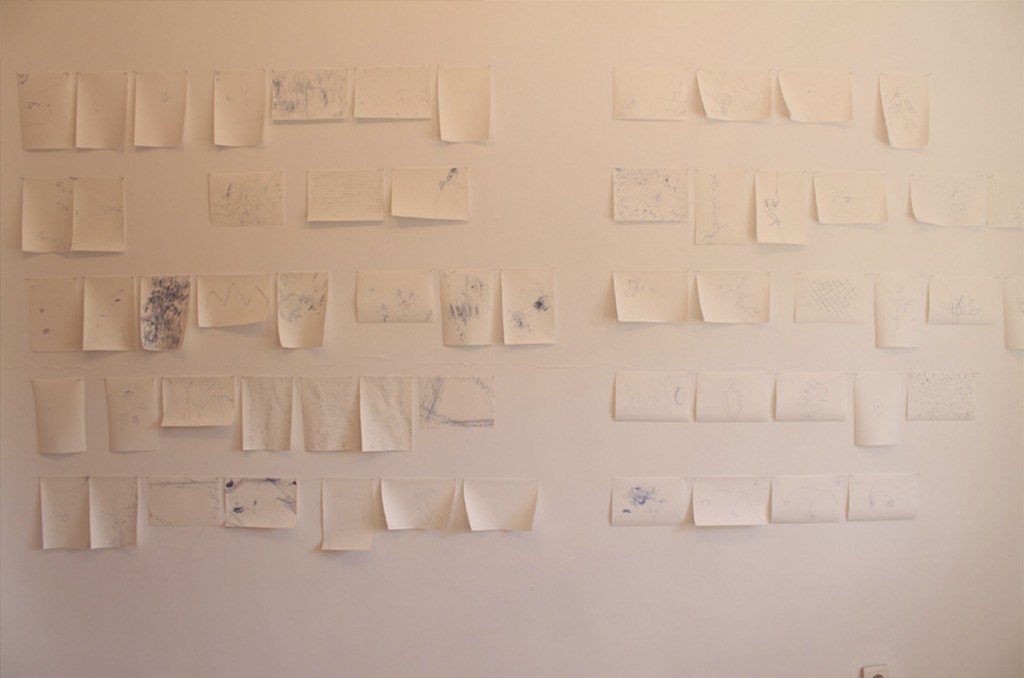 Toni Crabb was born in Harare, Zimbabwe, in 1970 and lives near Barcelona, Spain. He studied at the Universidad Complutense de Madrid and has extensively exhibited individually and collectively. His current work investigates the relational space through drawing as an intermediate surface, the ideation of collective projects, and other strategies. Fox is part of a set of works entitled Mind is a Form of Landscape.