In 2008, I was doing paintings from news images, family photographs, or set scenarios, in order to stir valuable personal connotations in the audience. I made almost no changes to the images beyond those produced by quick assessments; I considered the result a kind of readymade with considerable value placed on the selection of the image. One day I encountered on TV the news that Britney Spears had shaved her head in a moment of psychosis. I thought that, visually, this event represented the debacle of banality and the superficiality of an entire generation, the fall of a great mask that allowed us see the true face of pop culture.

I painted the piece in about a week. I printed the photograph in a Farmatodo store and nailed the canvas –of a meter and a half by a meter and a half– to the wall of my shared room. I did all this while facing typical and logical criticisms from my family, directed at me for pursuing a piece so un-commercial. I had tremendous difficulty performing the descriptive work of the blazing flash impacting the skin and teeth of the disgraced diva. I used a naturalist brushstroke, expressive, fast, that evinced direction and strength in the strokes so an emotion could be felt without losing an identity. Or the grin. I also found it difficult to work on the cheeks, lips, and eyes, bathed in that white light.

After completing the work, I rolled it up and took it to a new marquetry I had never been to. I remember my excitement at the good price I got, and later my disappointment when I went to pick up Britney and found that they had accidentally folded the painting in half, one side over the other, and ripped off parts of her face. I preferred not to waste time on useless claims and restored the piece. I masked it as best I could –cursing inwardly at the marketer– before strapping it to the roof of a friend’s car and taking it to the Venezuelan American Center of Zulia (CEVAZ), to compete in a salon titled «Emerging Youth.»

On the day of the salon’s opening (for which I had been selected), a very important journalist spoke to me about my painting, telling me how empty of imagination and spirit the author must be. I replied that he was probably right, and after a while they called to announce the winners. My piece was awarded an honorable mention, which I received very happily. The journalist interviewed me later, a bit embarrassed but cheerful; he received my game with humor.

After the exhibition, I became aware of the enormous size and disturbing nature of this work, so I did my best to get rid of it as soon as possible. I made a collector, who captured the conceptual beauty of Is Britney Bitch, very happy; he keeps it in his home as a treasure. Over the years, my pictorial proposal has been influenced more by surrealism and illustration or comic, but I still showed the piece in a group show in 2010, where some spaced-out assistants and organizers said that dark, evil rays were coming out of Britney’s face, which gave them a strange sensation of panic and fear. So, when the brief one-day exhibition ended, they decided to hide her face and sublimate themselves in the observation of other, much kinder works.

Carlos Luis Sánchez Becerra (1987)  is a Venezuelan painter. He studied Arts at La Universidad del Zulia in Maracaibo. He has been recognized with several prizes in his country. He also obtained an honorable mention at the Salón Pintura Miranda en Hispanoamérica en España (2009). 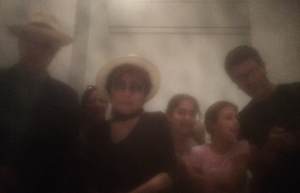