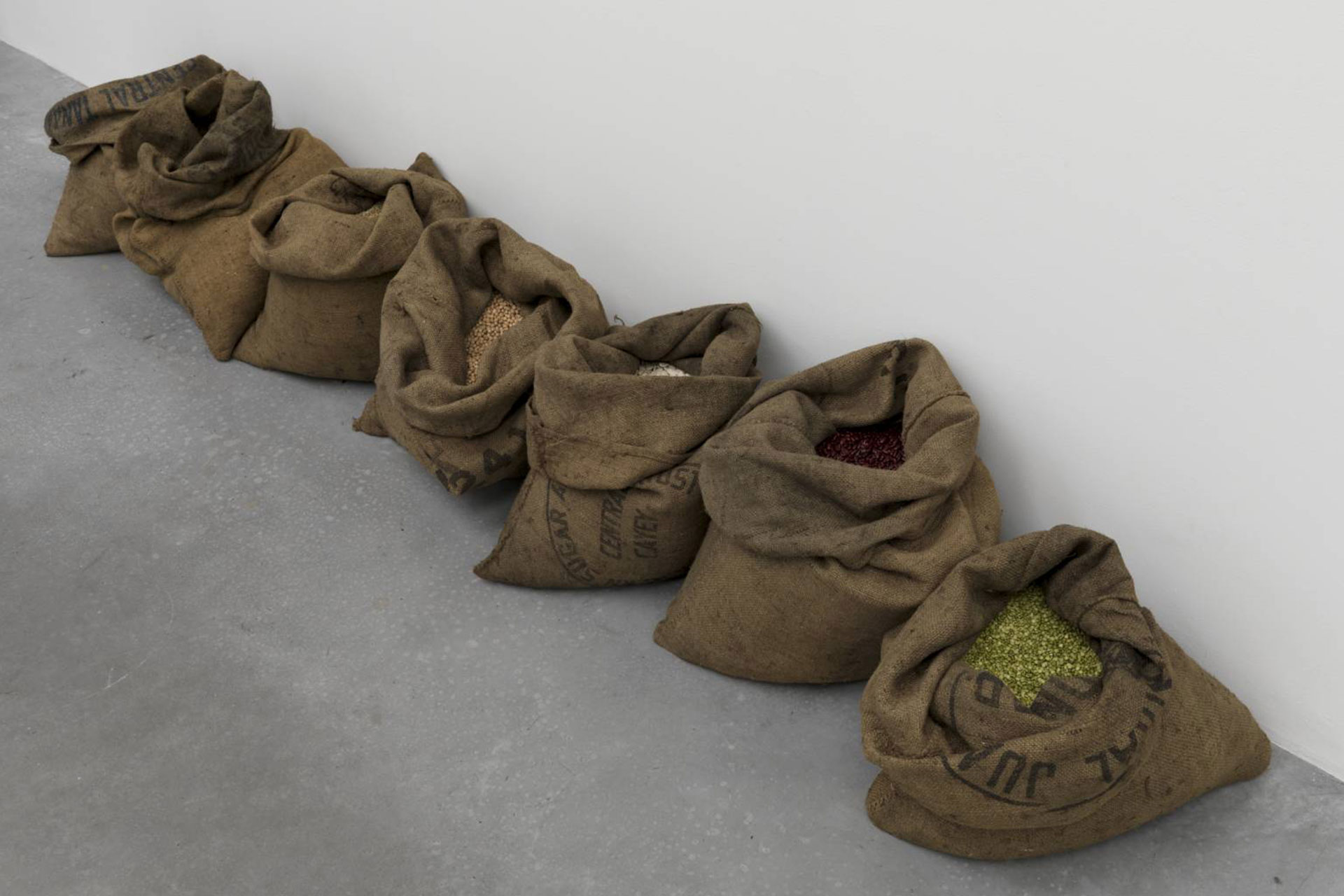 It is possible that the tinge suggested by the concatenation of the title I have chosen for this text might strike the reader as obvious—like everything that gets trapped within a discourse. So, I must warn you: though we might get to the same point, this route won’t parade any enemies for stoning, nor fathers for hanging, nor souls for invoking;[a] this path will be modest and localized: we will start from a trait of poverty and marginalization that I find in the Spanish word ‘legar’—to bequeath.

On this matter, the Dictionary of the Royal Academy of the Spanish Language (DRAE) establishes two Latin-derived senses: legare and ligare. The former provides three definitions: 1) Of a person: to leave a bequest to another by will or codicil; 2) To send somebody as a bequeather or with a bequest 3) To transmit ideas, arts, etc. Ligare, in turn, means: 1) To join, to gather, to bring together; 2) To bind or tie. [b] If we stretch the signifiers’ ropes a little, we will notice certain conflicting purports.

In the legare sense, both the first and second meanings provide a clear definition. ‘Legar’  is an imperative, an action that expresses a command, an entreaty, or an exhortation. Think about this word they use: ‘codicil’, which establishes «all last will disposition that does not contain an institution of the heir and which can be given in absence of a will or as a complement of it.»[c] The third meaning, instead, implies a non-imperative action, we might even call it non-specific, lax, to the point of ending the formulation with ‘etc.’

«To transmit ideas, arts, etc.,» compared to the conceptual precision of the first two meanings, is a poor and marginal definition of ‘legar.’

These two words—poverty and marginalization—have far-reaching resonance in the symbolic and imaginary order of language. It is amazing how they denote with a metallic crash something of what we don’t want to know about the other, something in the order of the real—Lacan would say: the real is also the impossible to bear. They are awkward words in the aesthetic drawing of the world. And even though the notion of poverty is as old as the political ideas, its definition is ambiguous and can only be understood in the face of the exertion of power.

Poverty implies a “not-being-able-to,” something one cannot count on, something one does not have. Poverty is a lack. In the Sacred Scriptures, the poor occupy a central spot. Theirs is the Kingdom of Heaven: the poor in spirit (Matthew 5:1-3 NIV), those who express their lack before God. Opposing the joy of the rich, with their abundant resources, the poor, the beggars, endure squalor and exclusion. They endure it in their bodies.

That is why the poor, in the long treason of beauty, are an ugly sight for eyes of the beholder. Pathological cretinism due to deficiencies in the body’s upkeep during the fetal stage has always appeared monstrous. Also the decay of a body that does not have the vital means to support itself. If politics is the upkeeping of power for the functioning of the polis, the rags that clothe the lack imply an expulsion from the matters of men—a marginal condition.

In the light of the unstoppable growth of the human infrastructure, poverty has shown its undesirable nature more and more. Especially if we consider the rise of capitalism and the prevalence that modernity assigned to the concept of happiness, placing it in an almost atavistic position. In order to be happy, one cannot be poor; quite the opposite, one must possess plenty, exceedingly.

Power has known how to manage the difficulties that arise in the upkeeping of this demand for happiness in an overly-populated world that has—believe it or not—limited material resources. The academy, politics, as well as the market, have known how to take advantage of this: they all want to content unhappiness, all of them fondle poverty. Populism, sweatshops, human trafficking, are sick tokens of this. But, paradoxically, power needs poverty to keep its central, privileged position, and that is why it feeds it nothings to the bone.

The contemporary world has made the beggar, the biblical poor, the degraded metonym for an outcast. It goes from the formulation of the poor poor that needs to be adapted to the center in order to be saved, to the wretched monstrous poor nobody wants to know about. Although poverty has always been a problem—a problem for power—contemporary poverty, so brutal in its scarcity, is truly an abyss of the real. It is from this newly coined poverty that the sociological notion of poverty as we know it stems out. Outcasts are isolates, excluded from the social system, subjects deprived of the material means to engage in the fabric of society, but also without the symbolic means to embody political life. The marginalized are the leftovers from the neat discourse of capitalism—be it corporate or State controlled.

Latin America has always—since its naming—had a mortifyingly close relationship with marginalization. This is due to its peripheral position in regard to the core centers of capitalism. For us mestizos, born out of European mixture, marginalization is a fact that draws circles on the soil we step on.

It is not gratuitous that the signifiers ‘poverty’ and ‘marginalization’ are rescued by the poets Armando Rojas Guardia and Igor Barreto in a singular way. «We are all poor, we all take part in the signs of poverty,» comments Igor in an interview.[1] Rojas Guardia, for his part, talks about “the discourse of marginalization” as the most symbolically meaningful form that the Venezuelan literature has adopted to account for our failure to enter modernity[2] and, moreover, to portray a collective feeling that is organically connected to «the failed, the truncated, the aborted, the strayed,» and which our history has done nothing but suppress.

They both agree on the opportunities offered by poverty and the marginal condition for human wit and sensibility. But, mind you, this poverty is essentially different from the poverty of the ruins of power. This isn’t the poverty that embezzles desire, that empties the conscience, that kills with hunger, and plummets the amazement of living. Quite the opposite, when Igor condemns that «power places greater emphasis on the manipulation of that which it needs us to forget,» it’s because by impoverishing the memory of what we have been—not in our heroic military deeds, but in the humanity that has made grand things out of nothing—we become poor hopeless bodies that can only stamp their fingerprints to attach more power to the power.

This poverty of which the poets speak—the marginal condition in which all excluded from the symbolic ordering of power take part—invites us to carve a place for ourselves in the world. Rojas Guardia refers to «an other, unexpected, way to access the center. When we consciously assume marginalization, we do so—in a tacit and implicit manner—trying to transform that very marginality into an unprecedented center.» Accessing an unprecedented center is what Walter Benjamin did with his life story; this shows in his conviction, towards the end of “Experience and Poverty,” when he compellingly invites us to build with «men who have adopted the cause of the absolutely new and have founded it on insight and renunciation.»[3]

Let us remember that in this essay (see also), Benjamin also talks about the importance of “passing down an experience.” Undoubtedly, this passing down—legare—refers to the “poor” and “marginal” definition that speaks of «transmitting ideas, arts, etc.,» instead of the imperative that commands to carry upon the shoulders the unrealized from the desire of the Other, the phantasmatic and unshakable failure of the paters of power, the fulfillment of the unquestionable will of the deceased.

Lacan too spoke of the “poor in spirit” while referring to Lewis Carroll. He pointed out that the balance in the unicity of Alice in Wonderland lies in the condition of divided subject which wraps Carroll in the contradiction of being a poet, an Aristotelian logician professor of mathematics, and a fervent religious minister convinced of the existence of God and his kindness towards mankind. Lacan says that it is from this “wash” blending of these three aspects of Carroll where the “happiness” in his work comes from: «a blessed on the shore of a story (…) a poor in spirit.»[4][d]

Gérard Wajcman takes on this approach for saying that the “poor in spirit,” as he derives from the Lacanian formulation, is «poor in spirit and poor in all things, one who has nothing and nothing can give, thus, he cannot give anything but what he is (…) The only way to give it all, without remains nor return.»[5][e] It is the poverty of one who is aware of his lack, his incompleteness, and at every time it opens the path of desire. Such is the opportunity offered by the poverty of completeness, the richness of being pierced by uncertainty, the advantage of one who seeks a word astray on the margins of the centrality of language.

But this quest cannot be conferred beforehand by a legacy, at least not under the meanings that turn it into a bind, into a transfer that precludes all possibility for question or discern—“Here, this is my anvil of legacy; carry it.” To think of legacy as transmission—not transference—of ideas, arts, etc., is a way of taking charge of one’s own desire, of the commotion produced by an encounter with the tradition of sensibility. The moment one is compelled by a work of art, by the lucidity of an idea, one is invited to take a stand in regard to that discourse. It is always a choice to embrace it or not.

The legacy of «an idea, art, etc.» may «join, gather, bring together,» but never «bind or tie.» One inscribes a saying onto a tradition, gathers around it to sustain a basis; one argues, dialogues with it, tells it something. Never should a legacy be used to imprison within its one demand, its ‘equal for all,’ its standardized affiliations, its clientelistic massified jouissance. If inheritance is unavoidable, then let us scrabble around the lumber to stumble across whatever works for us. Let us refrain from turning the bequest into the menacing watchful eye of heresy; quite the opposite, let us embrace heresy as a bright possibility for undertaking heritage.

[a] Since the death of Hugo Chávez, the Venezuelan government has centered its political argument and campaigns around the signifier “legacy,” bestowed upon the “children of Chávez,” by the “Eternal Galactic Chief Commander.”

[1] Interview with Igor Barreto, published on December 4, 2016. Retrieved from (in Spanish):

[2] Speech pronounced by Armando Rojas Guardia on the occasion of his inclusion to the Academia Venezolana de la Lengua (Venezuelan Academy of Language). October 2016. Retrieved from (in Spanish):

Jordi Santiago Flores (Caracas, Venezuela) is a researcher at the Center for Critical and Sociocultural Research of the Universidad Simón Bolívar (CICSC-USB). He is a professor at the School of Arts of the Universidad Central de Venezuela (UCV). He is currently writing his doctoral thesis in the line of Psychoanalysis and Social Sciences of the UCV’s Social Sciences Ph.D. program. His fields of interest orbit psychoanalysis, art, and politics. He is an Associate of the New Lacanian School at Caracas.