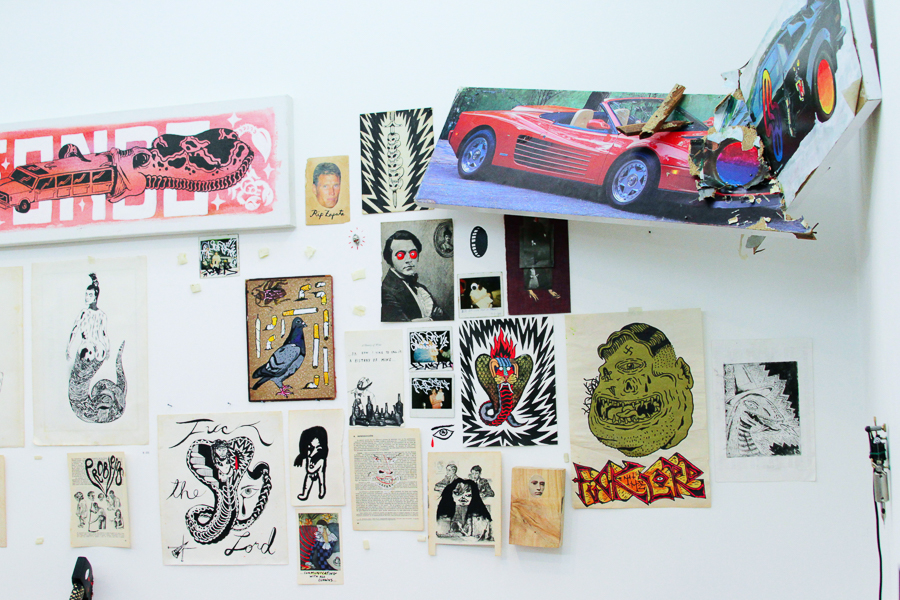 The universe expands and is born out of friendship. Whoever doesn’t understand this, does not understand the dark sympathy of the universe. The sympathy that moves everything internally is continuously the intuition of friendship. Whoever understands this—let us insist—opens up the universe with a strike of light. Under this perspective, all the sacred books sentence and advise on the relation of friendship and the universe. On this occasion, we come across a book written and exhibited among friends, a book that opens us up not to what’s fucked-up—»jodido«— about life but to the profane and intuitive illumination that is friendship—the simple connection of sympathy towards the fucked-upness and endlessness of the universe.

The book is one of the most interesting structures in the universe. How it opens and closes and half-opens evokes an invaginated structure; its printed contents and characters, an impregnated belly. The gesture of reading involves touching the page as skin waiting to feel what can sprout or emerge from it. The drawn trace marks its possibility and its deed. Everything can be born in the book, and it is, in turn, a small death growing.

El Jodido Libro de la Muerte [The Fucking Book of Death] introduces us to an exteriority, a death that is outside, in the world, and inside of its own disruptions; only the intimacy of friendship safeguards what is extinguished. It safeguards and records by means of drawings, strokes, annotations, illustrations, and sketches that evoke laughter and forgetfulness, the pleasure of complicit laughter in the face of fuckedupness. Fuckedupness can do and undo, like death, and expose the inner workings: the most fucked-up exhibition, and its internal resolution to everything that disturbs this world.

Death Boysz. Death makes us young. To an atheist, death makes him young, eternal, but based on an illusion of the end, a great design of the universe with which he makes communion, more typically by the end of his days. Sympathy is a memory, not a practice for him. For a DB, death evokes the game and technique of exploring and exploiting death in all its creative sympathy. Yes, death makes us young, and it makes laughter and creation its end.

All the pieces a DB assembles unfold their presence without an end, without a beyond. Installations are archaic, comical, and futuristic. Its field of references is public but also intimate to the friendship. The drawings and illustrations are stripped of great meanings and touch us in the darkest of our sympathy. Is this, then, truly outsider art? While together they form a kind of vehicle, a ship, or perhaps the garden that resides in every book, it seems to me that within each single piece we could observe the garden of the universe, in its reading and the strength of its expression, the ever half-open creation. A floating Kindergarten, or better yet, a Todeskindergarten [1]: A ship in the shape of a floating garden, swaying in space, open, calling for more members and more joy.

A book of death inevitably leaves residues and a trail of fat, remnants of its decomposition. Its marks are a feast of what resides among all. The inner work, common to all, is excessive. This is how you should see a piece of bacon as you would a crystal. Grease, in this case, is regarded just like elegance and grace are regarded in the universe.

Truly, it is also excess, transfiguration of grease and grace, beer and drugs, all pleasures that are sought over and over because they refer to the passion that is friendship ‘till death. This passion is a perspective: Residual fat, garbage that exposes the fucked-up order and reveals it, an order that in turn discards and excludes it; a perspective that reverses, which is the interesting thing. It is an investment of life and an abortion of social life in which the fantasy of any project is realized. This is what the fucking book of death urges us to do: not merely the futility of some project and meaning, but the garden of endless friendship as another way of evoking death and all that could be born at any moment.

Creation only comes from improvisation. To understand this is the first step towards envisioning what will become of any exhibition of knowledge and internal references. According to an old saying, when young people have fun the social order collapses. But let’s not fall into the illusion that a party can create collapse. The fucked-up is that which collapses the shimmer of friendship.

The holy profanity that dwells among these friends is their greatest asset. They create wealth from the extinct force that is life—life in common, to be precise—and, yes, they extract from ink their renewable force, unlike that of the reigning necrosis and petrocultural necrophilia. The fire extinguisher and its power are the beginning and end of the stroke, the sense to which they are exposed.