The Library in the House 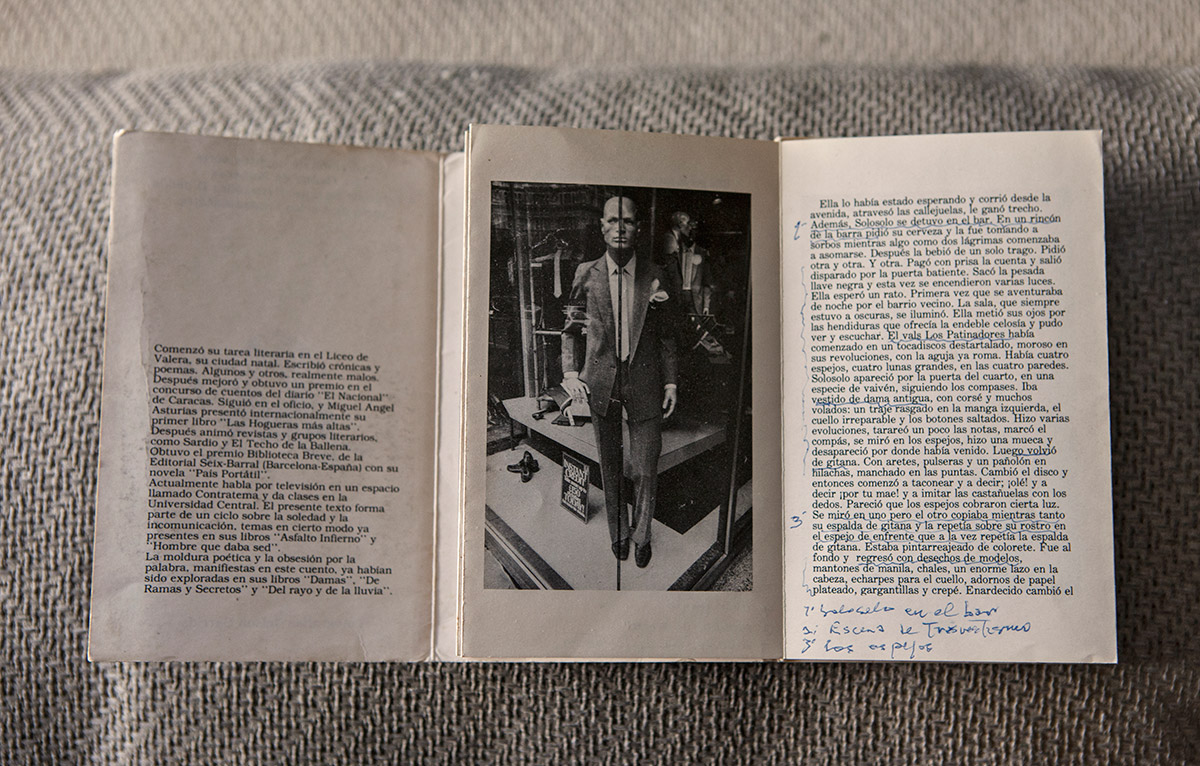 Writing about Adriano is not easy. Writing about his library isn’t easy, either. It is a notion too noticeable and at the same time swarming with certain sentimental family nothings that involve only me; or it is so very quotidian, to the point that though it is his library and it belongs to him, it also belongs to my home. Something shared; an entity or an individual. 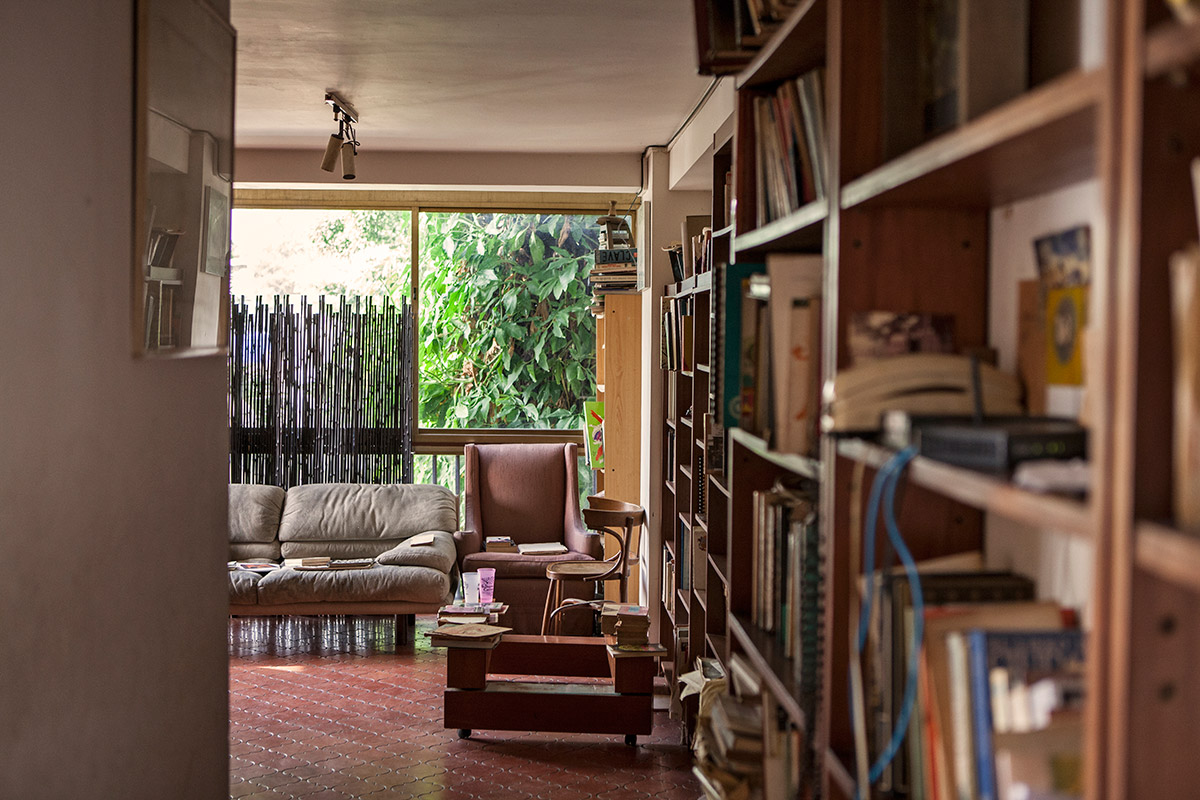 And by talking about the house, I’m writing about myself. Tough luck: this library has witnessed most of my life. I do not remember books as a compulsive acquisition, but they came in one way or another. And with the severity of my anomie, I stand face to face with a pile of memories that I perceive in each spine of the books present. The evocation produced by each title, each act of browsing, every curiosity stirred… as, for example, to have found out early what Popol Vuh meant. It is a written presence that affects me quite a lot.

When I think of what my father once told me, I feel still more uneasiness: How many books one is yet to read! You would have to imagine the void that situates you between your own ignorance and the one he manifested, between what I might have read at my age and what he might have read—and re-read—: a writer devoted to the daily task of canonizing every bit of memorable knowledge, something he might have voiced in a lukewarm or incomplete way but still adorning it as if he were the book itself. On the other hand, the crammed shelves bounced off the sound of his constant and urgent verbosity within the walls. 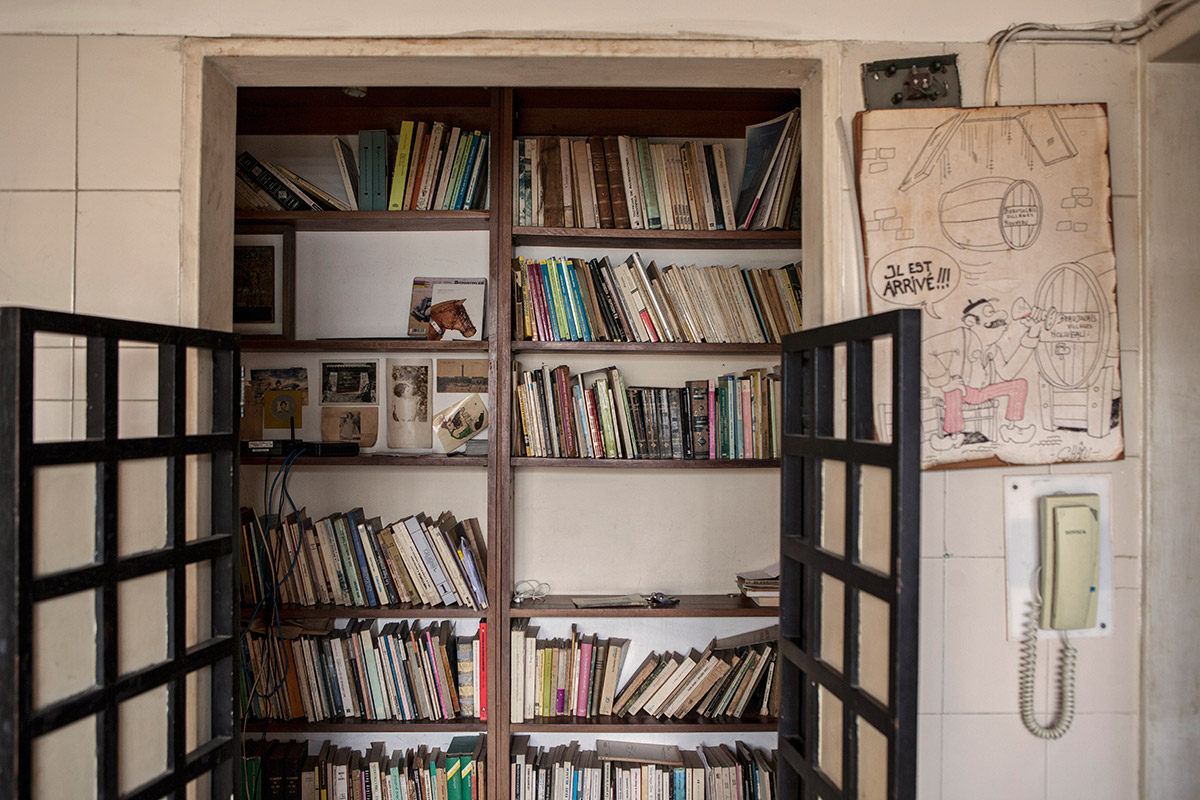 Whenever those huge envelopes arrived with Monteávila’s newest array, there came a loud warning that I should not open them. I scattered the books in a particularly awful order to my father’s eyes. It was normal to be exasperated in the midst of so many volumes. Shouting was his vast problem-solving logic (maybe rather trujillana [1]), but reason was always stirring between his fingers. There was never a way to refute him. But that’s another story. 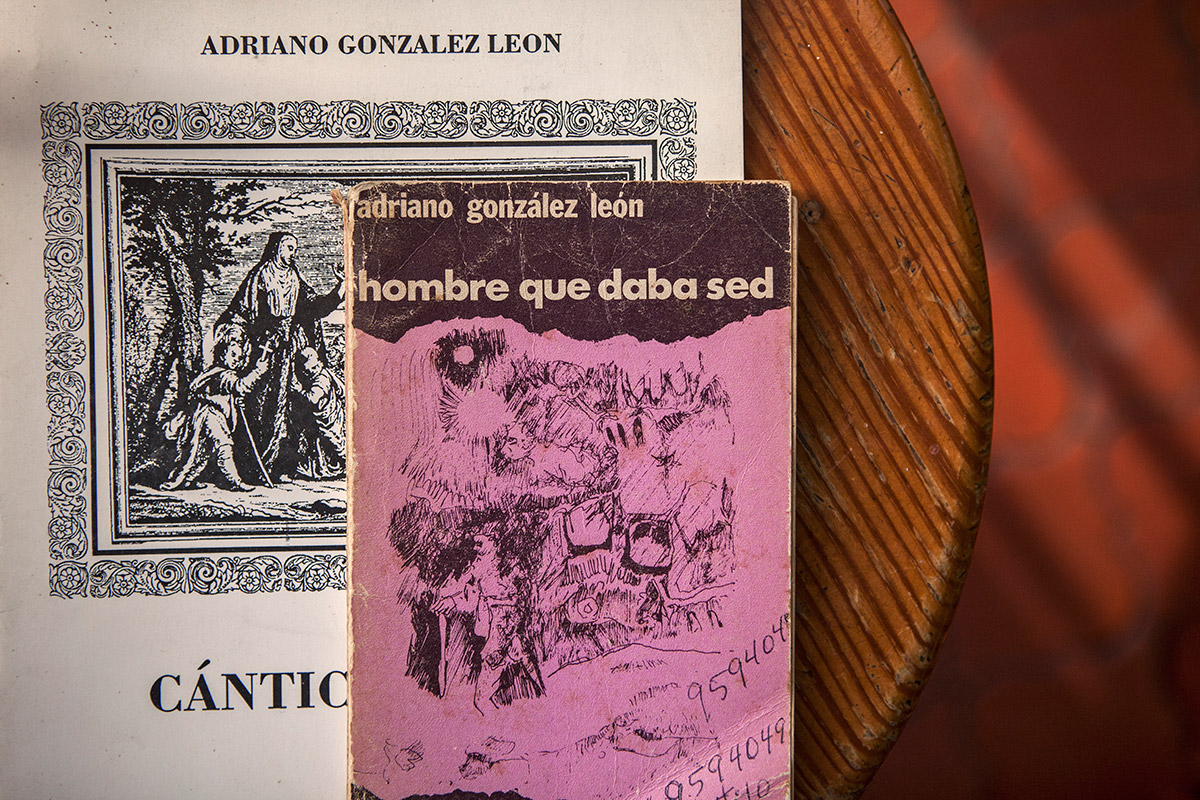 Who is the legacy for? Can we discuss the core of Adriano González León’s library? Over a possible move, should the library be dispersed as a disaggregated, monetary, volatile, fragile, gift value, surrendered to the world of garbage and vanquished paper? Or should it undergo conservation, in benefit of the many who would not be able to access those same books under different circumstances?

The premises of this text oscillate between what the heir cherishes and what the statism of time retains. Crazy attributions of deciding upon something that perhaps does not belong to you: that’s my way with the library, since I have been gradually subtracting several tomes that are now part of my collection. No one found out. 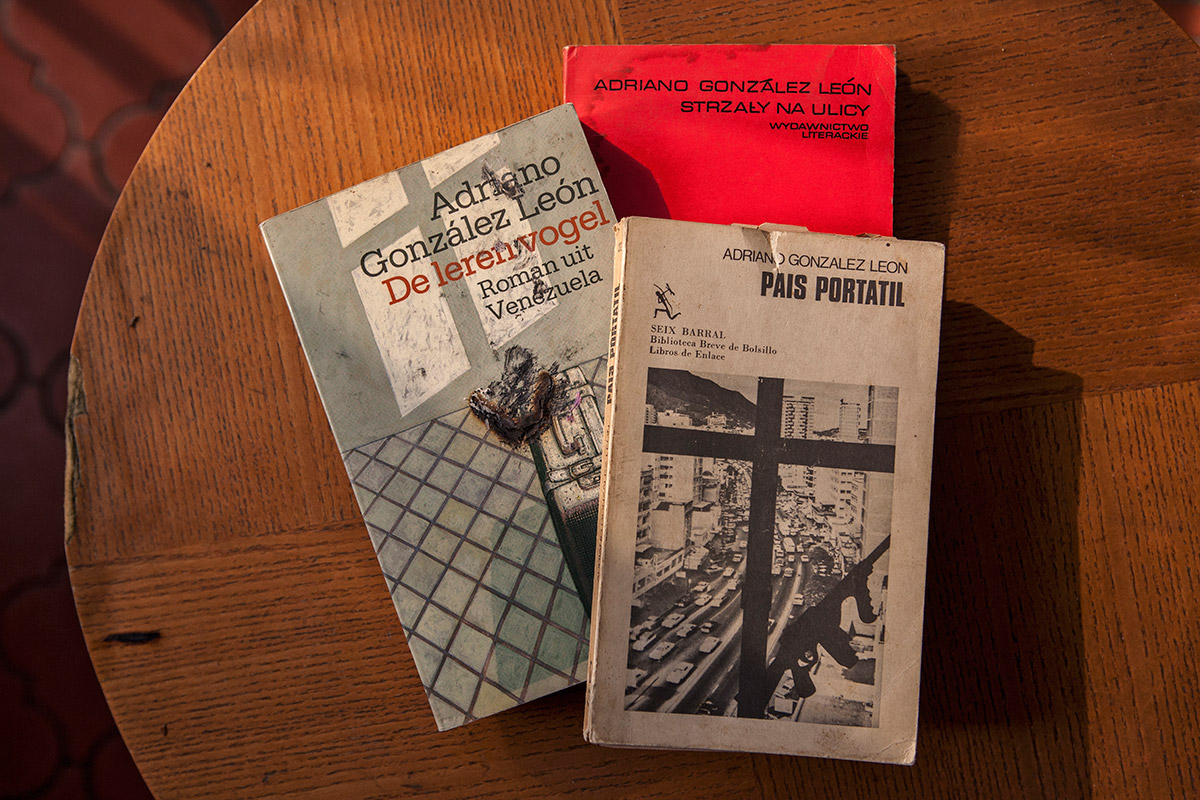 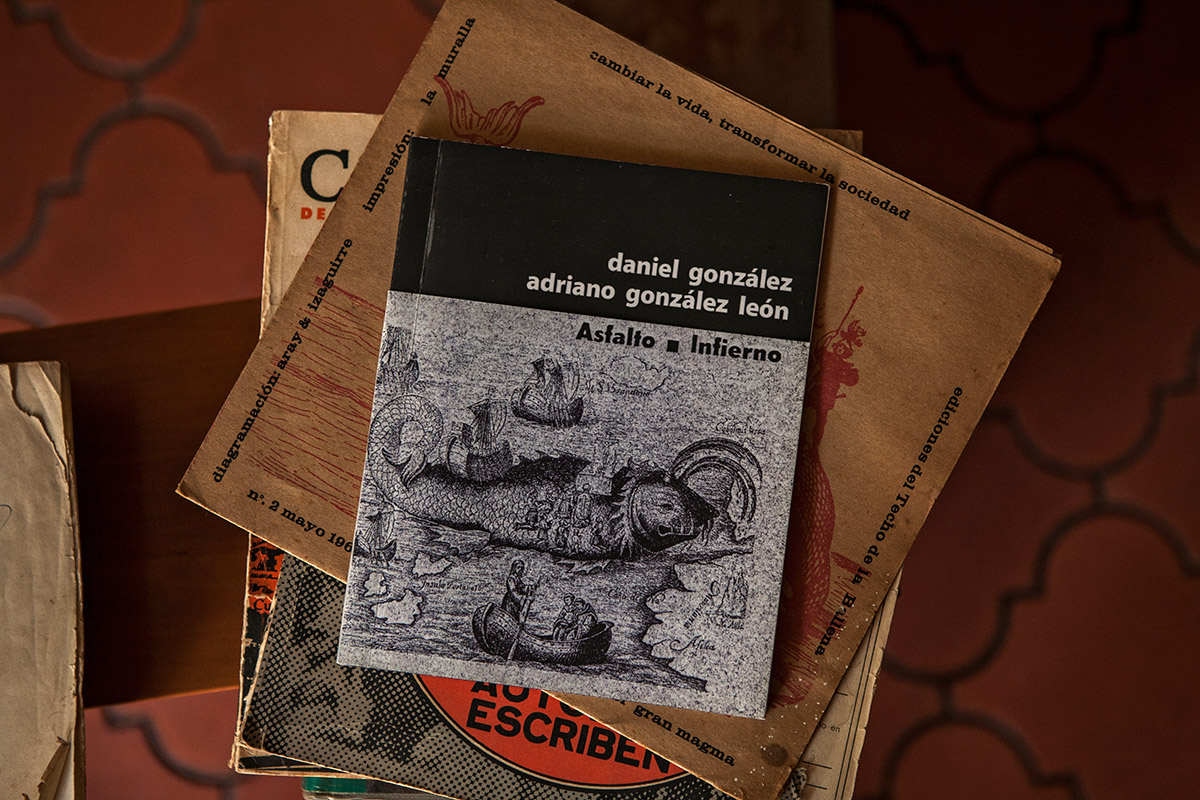 It is a mental disaster to have to account for something that was never supposed to be numbered. Nor were the shelves divided into perfectly ordered genre sections. There are whole spaces where his handwriting overflows notebooks and loose paper sheets among dozens of folders that my patience cannot review or try to organize—I lack methodology and allergy relief. We aren’t even talking about files that were produced in the years of my existence, but inventories lost throughout the seventies and much earlier. 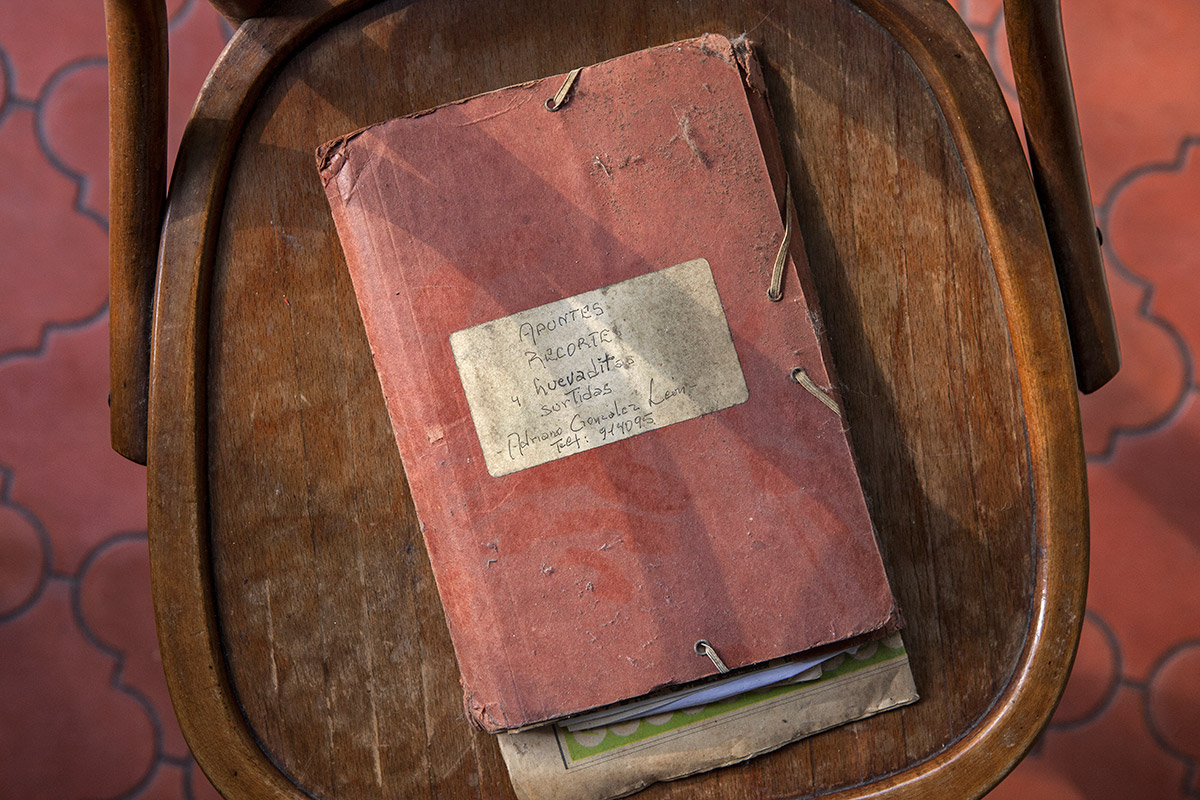 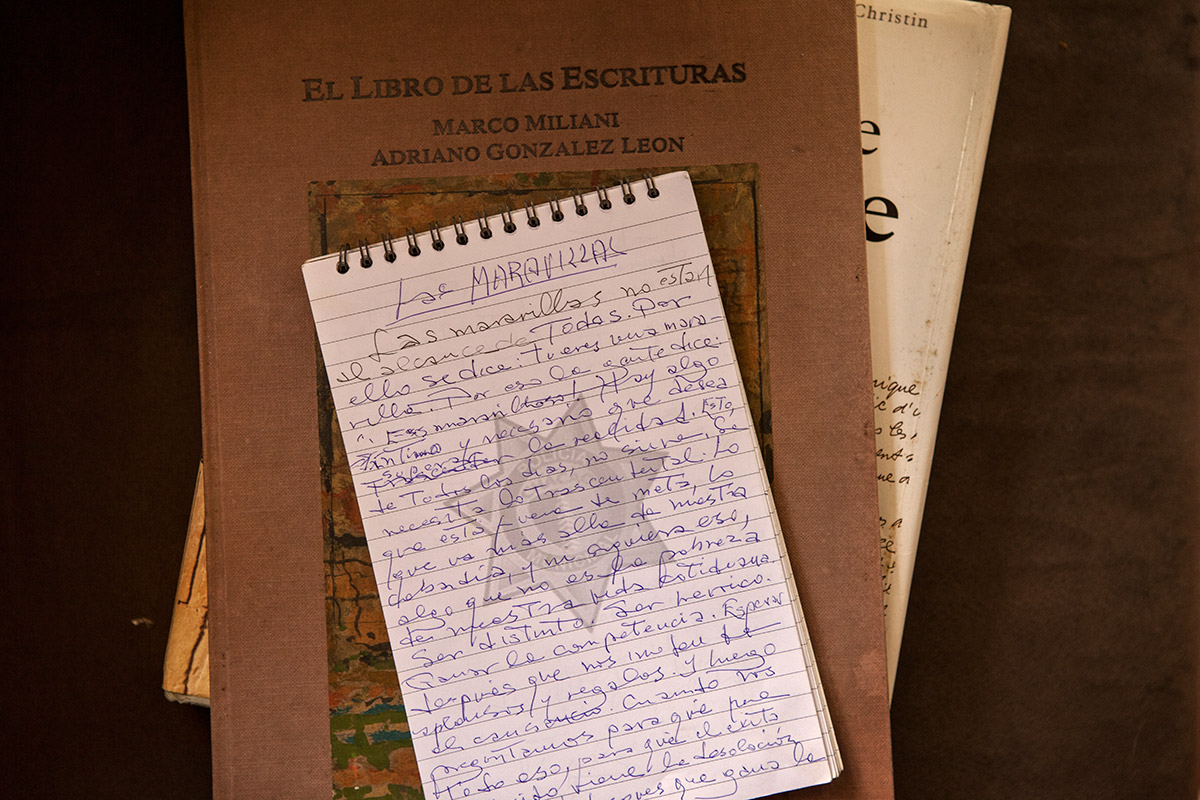 As for the conceptual appearance: the shelves were in charge of David Miliani, architect and friend, whose idea was to make a kind of structural boa constrictor where things could fit within a space of 80 m2. The thing is that, for the good of the room, it was preferable not to fill the walls with books but with good paintings… until the bibliorreic invasion became inevitable.

The best numerical organization—chromatically uniform at the same time—, is that of the Biblioteca Ayacucho collection, which, even without País Portátil, creates a powerful soundproof barrier inside the wood and inside the house. The collection is almost complete. 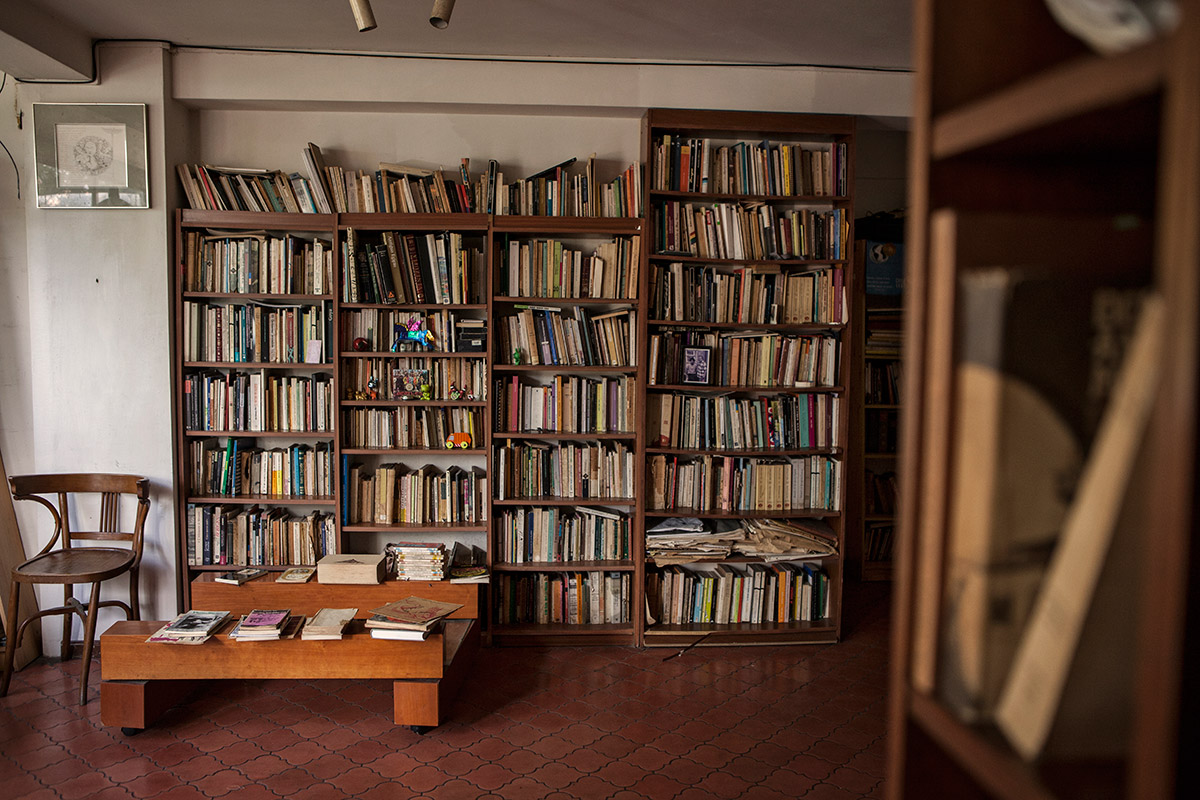 A deluxe randomness configured many mixed thematic visions. Order by size is more or less logically maintained within the environment. The arrival of new, orphaned titles without available space was more invasive. Everyone communed there.

These are volumes that are and were there because of their titles, by acquisition or true collection, some as signed gifts; in short, they arrived by themselves to settle in over the course of time. Disorder brought them in and in disorder they coexist. 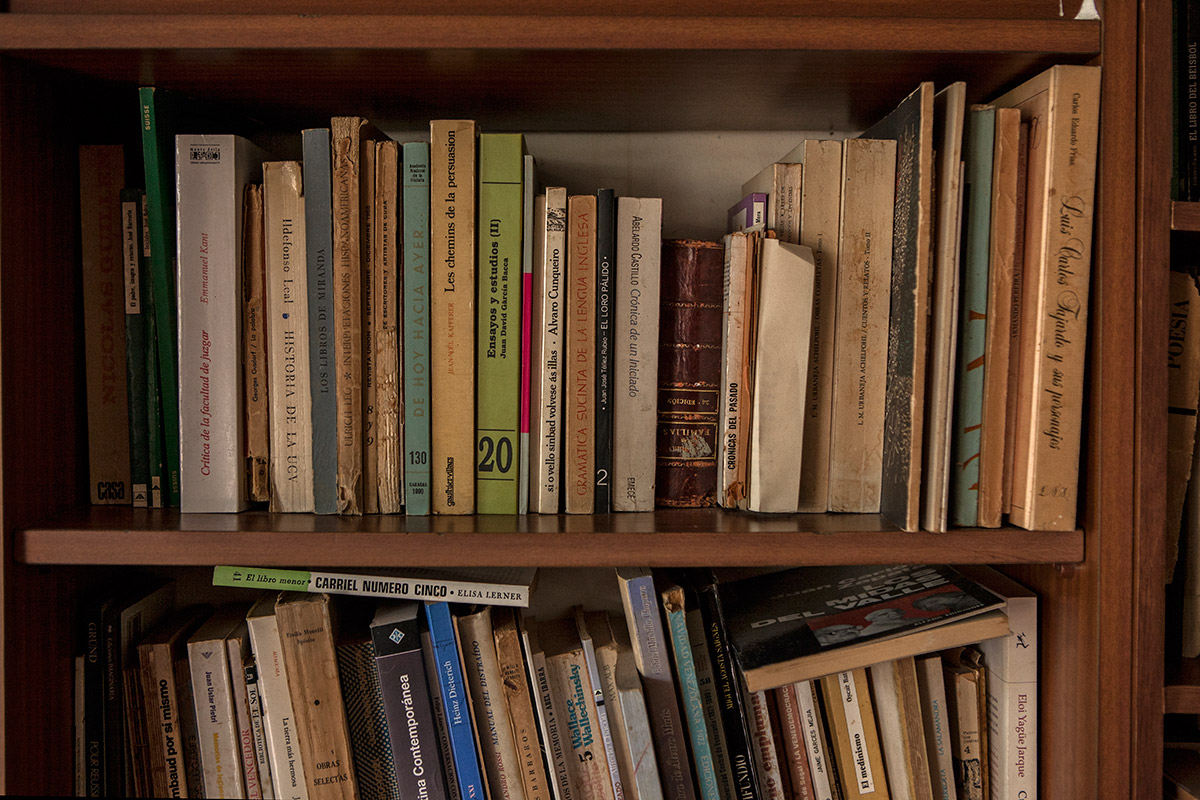 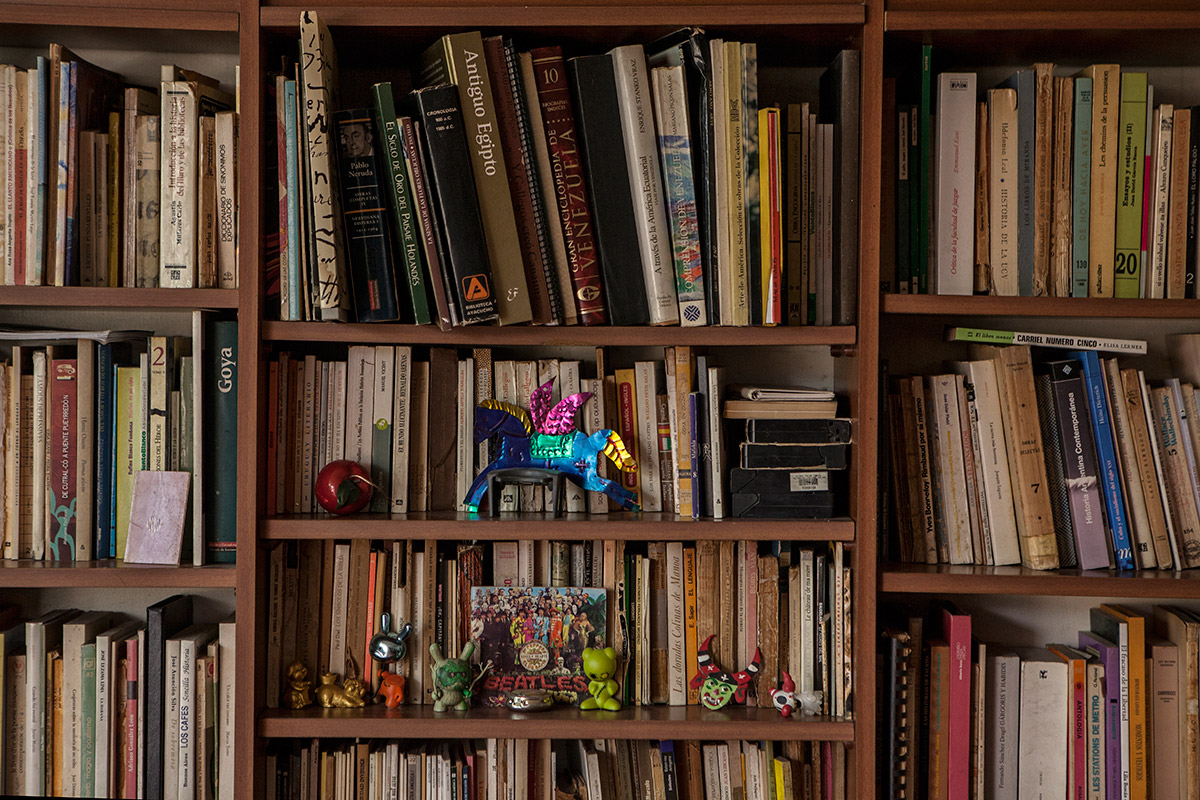 Theory, poetry, world literature, fiction novels, treatises on stew, medieval literature, some Plato lying somewhere, Juan Sánchez Peláez, geography of the state of Trujillo, Salvador [Garmendia] and his memories, his feet of clay, El olvido que seremos, Cintio Vitier, Onetti, La Liebre Libre from Maracay, Christopher Columbus and his diary, or the French of the 19th century and the surrealists, occupy a nice, strategically spun sequence. From Baudelaire, Mallarmé to Brèton, one can see several notorious titles in the original language of their authors. Gallimard certifies it. A pure, messy and poetic succession. Trakl, Auden, Eliot, Hölderlin, wandering, taking turns when a random verse is requested. Between Gilgamesh and El Corbacho, or the distance that linked an ancient epic poem and a medieval moral treatise, there was a gap two centimeters wide, and saliva. Absolutely different themes and epochs were strewn together in the cloudy designs of Adriano’s poetry and oratory. And so, the Borges-Asturias-Carpentier triad, indissoluble for the effects of his teaching, is placed in the best spot, as is the ample collection of Latin American novels and short stories. His contemporaries and countrymen, of course, had to be kept close and in permanent review—including the family of comrades and friends who are somehow pillars of Venezuelan literature. 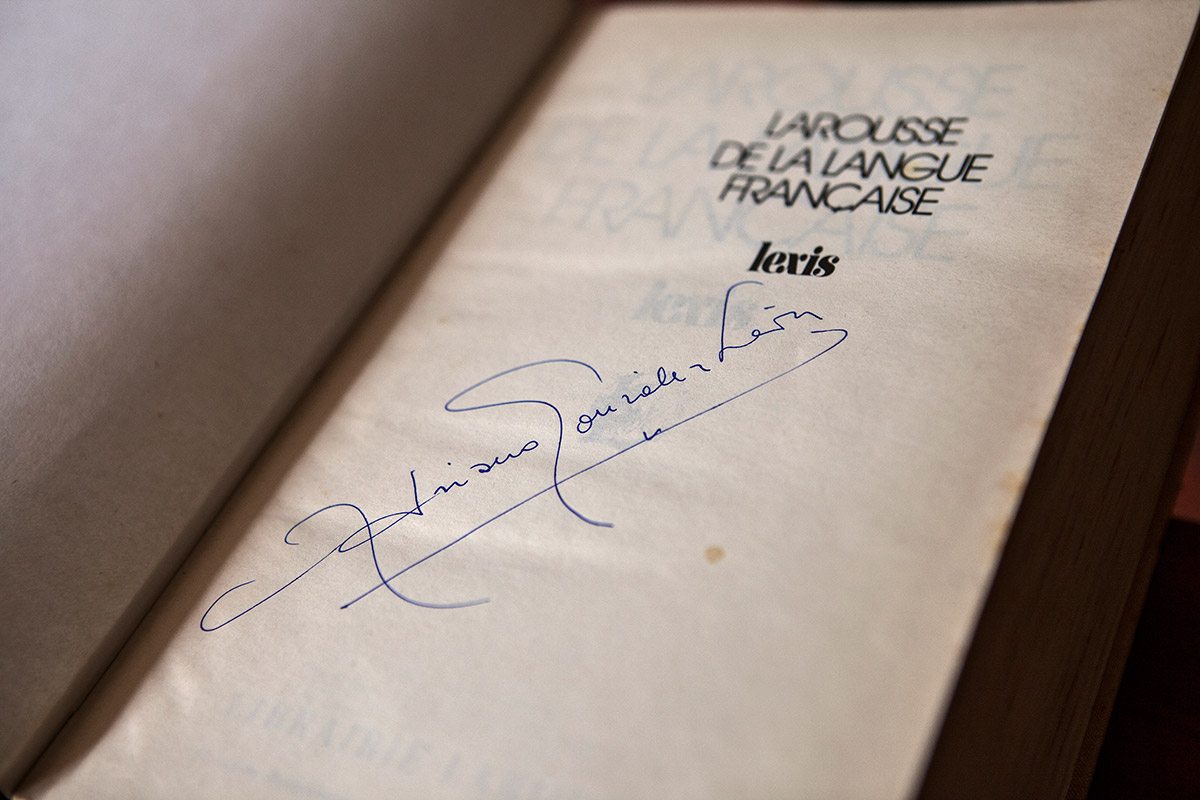 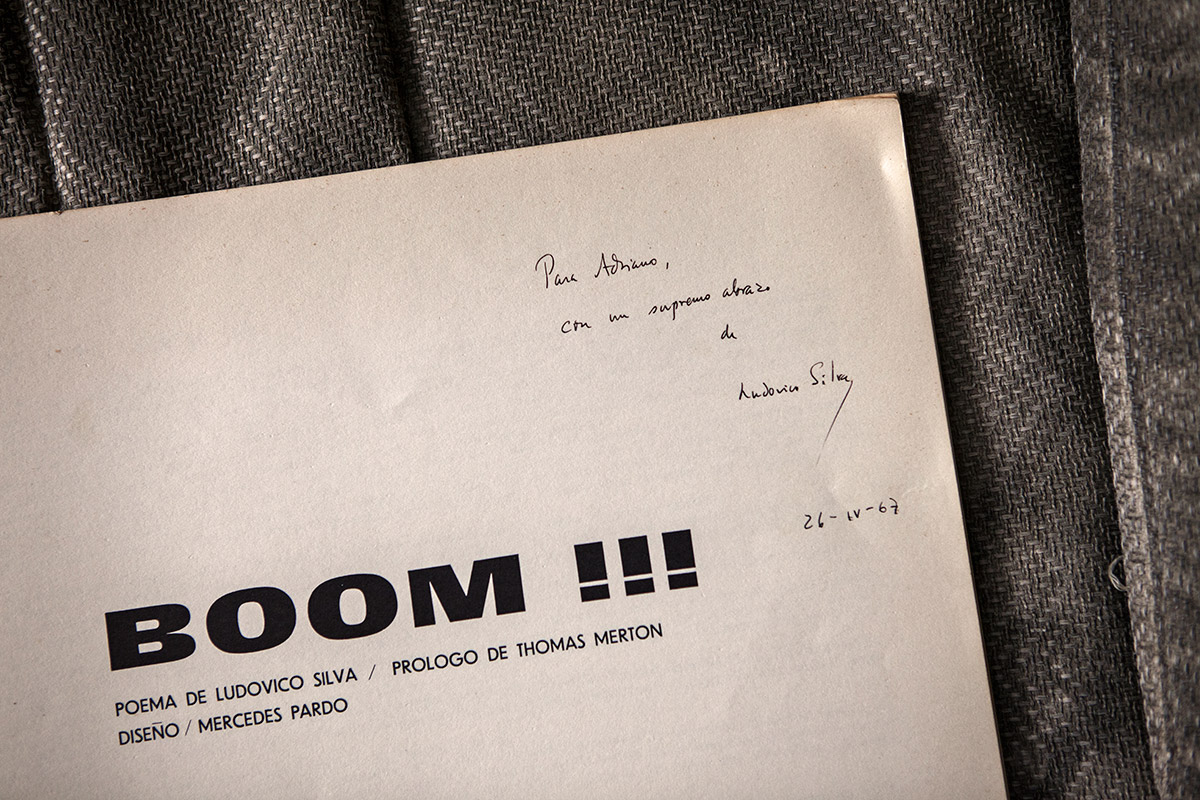 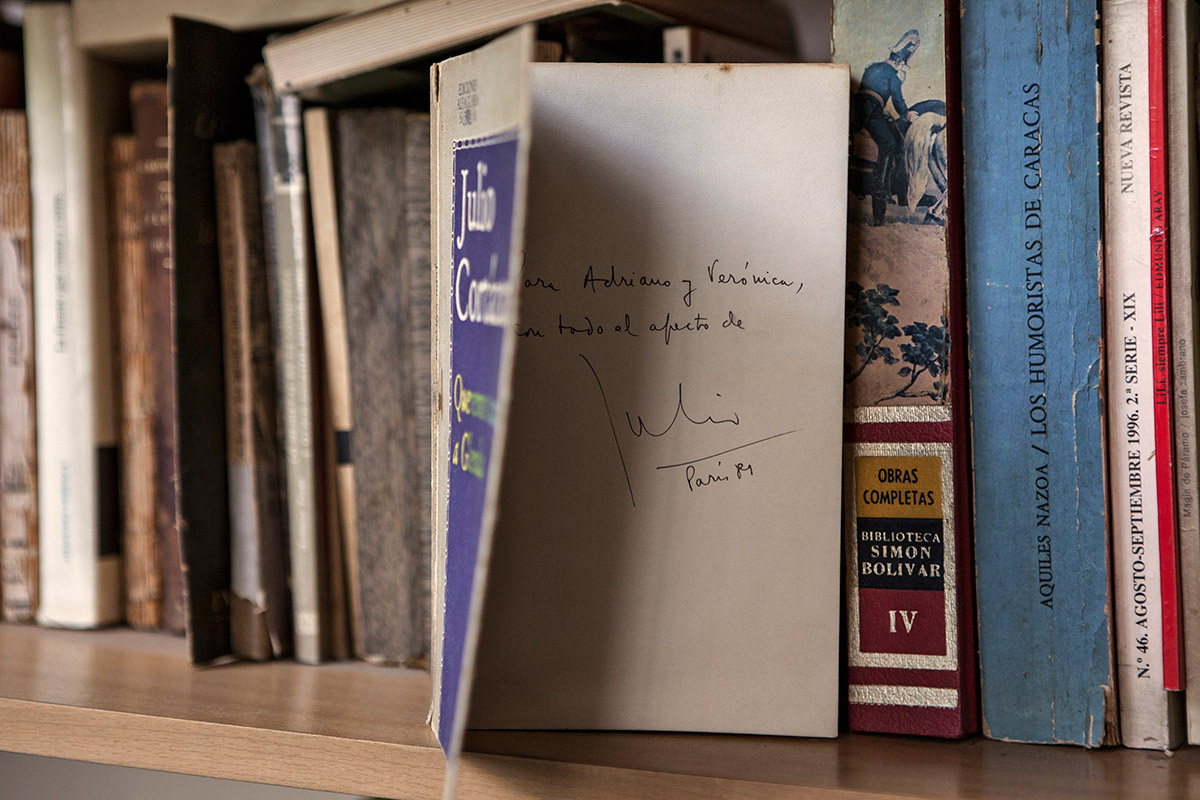 I can’t fail to mention the compendia of psychoanalytic theory, behaviorism and Gestalt, including Melanie Klein and Freud, because there are four sections filled by the academic training of my mother, Verónica Camino, a clinical psychologist whose inquiries between the literary realm and the humanistic sciences resulted in a sublimated yet precise vision of the world—something that involves descriptiveness and an almost narrative perception of life itself. 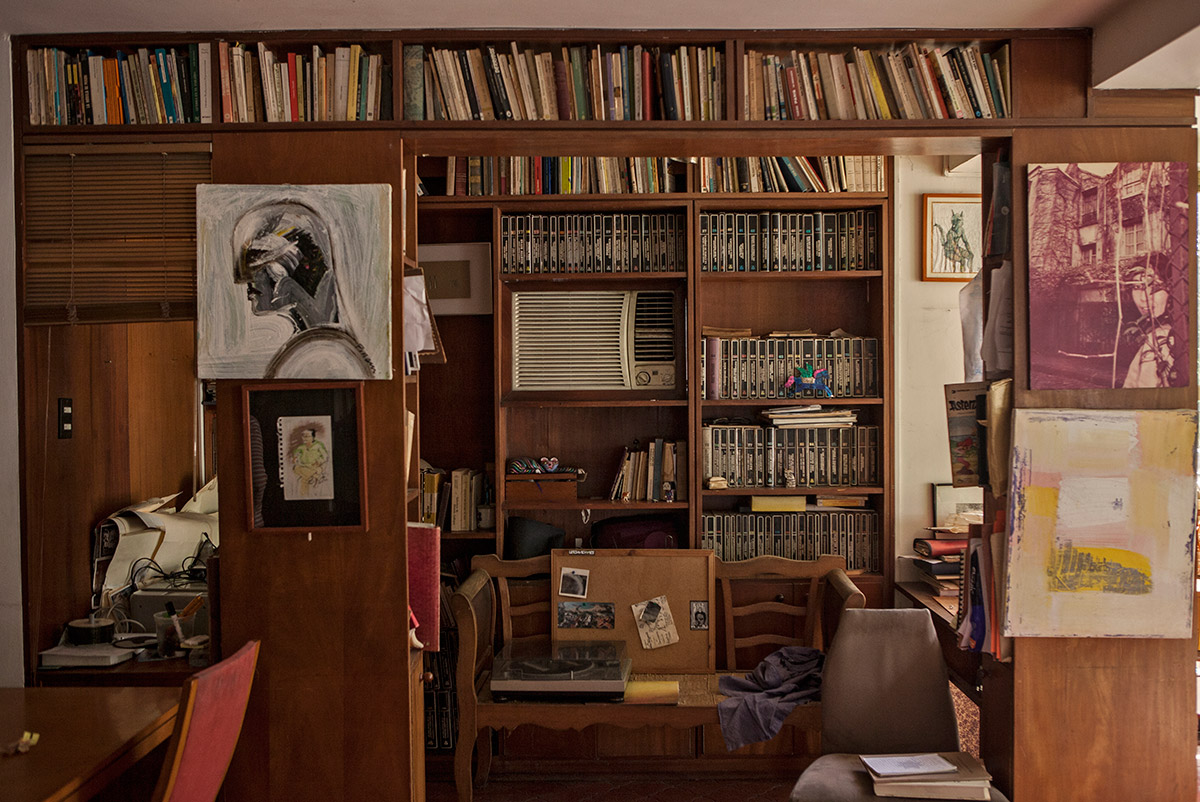 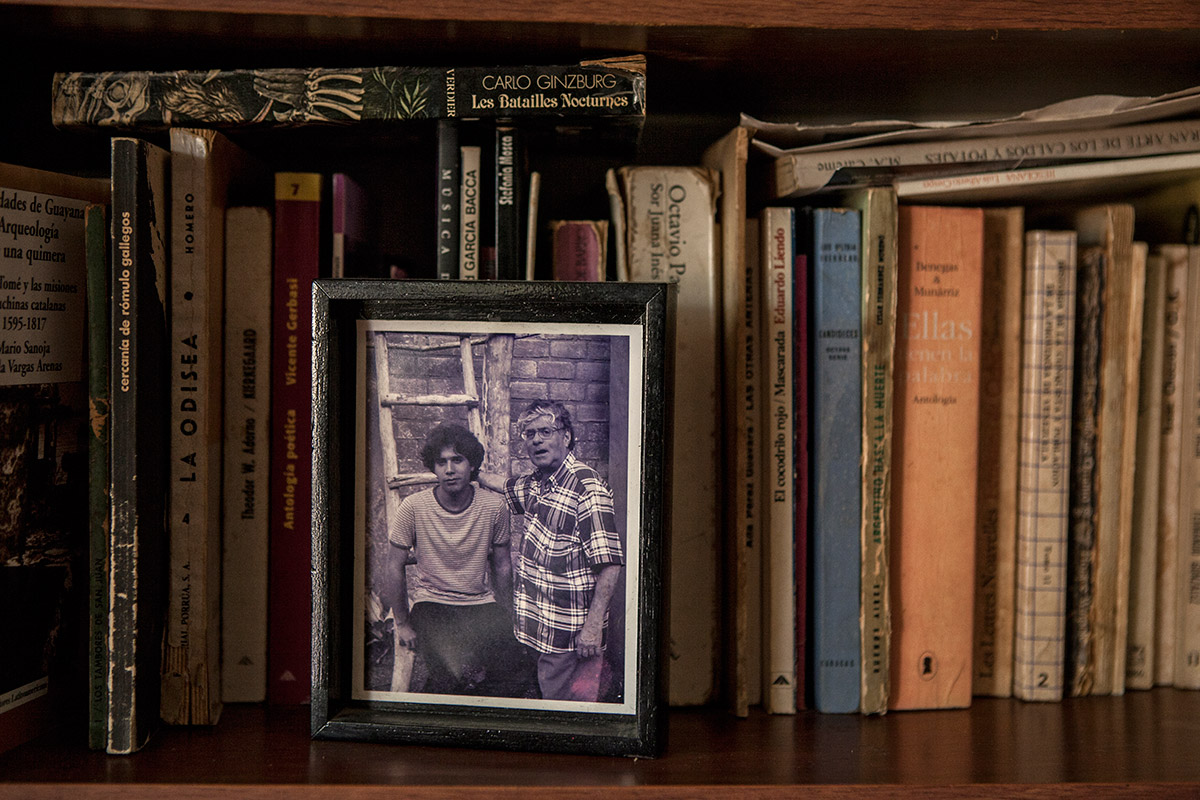 There was some favoritism, no doubt about it. In the possible rooms that sheltered the books there was also an accumulation of things that, according to the old man, were «caliche» (as second-rate information is dubbed in Venezuelan journalistic jargon). 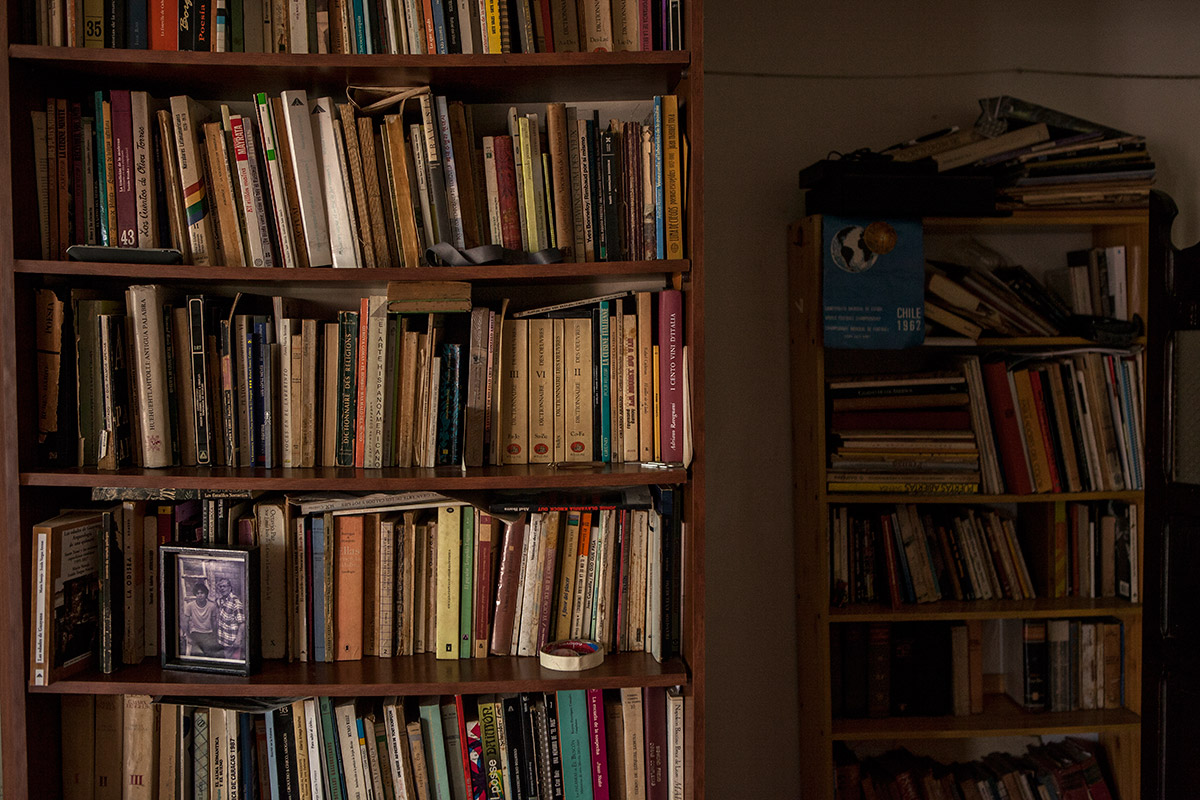 The transformation of the environment through books can take a relevant course. In the meantime, the library might expect a timely audit, in order to figure out the deepest and most meaningful values within its copiousness. This would answer the question regarding legacy. It is a substance that abounds in titles and deserves to become an open, public and tangible heritage for posterity and, at the same time, an eternal selection circumscribed to the personal collection. 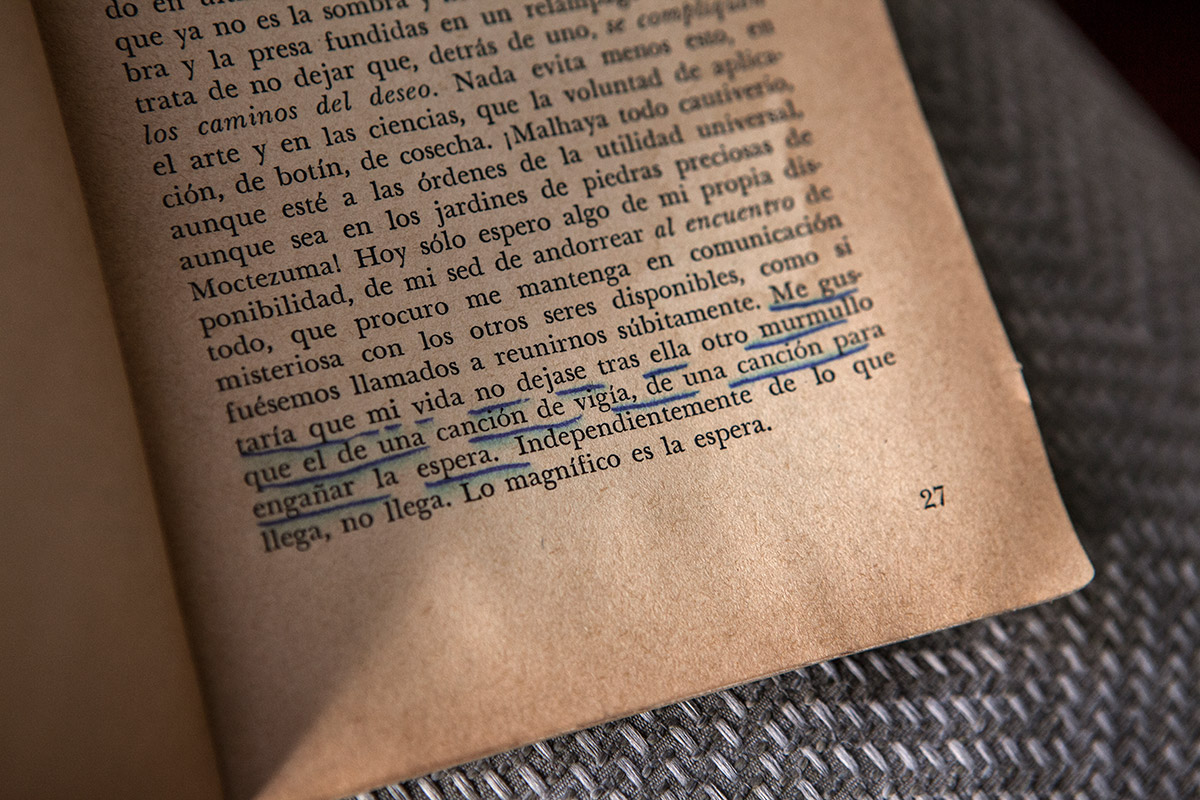 [1] Referring to the region of Trujillo in the Venezuelan Andes, where Adriano González León was born, in the city of Valera.

Andrés González Camino was born in Caracas in November of 1983. He holds a degree in Literature from the Universidad Central de Venezuela. He is a web editor and journalist. He has worked in radio, television, and cultural promotion. He is a poet in critical cases. He belongs to the Viernes Negro Generation, and at the same time is supposed to be a digital native, as he is often told.