The Outline of Things

Maybe aesthetics can only deal today with works in uninterrupted progress.

The paintings of Alberto Giacometti seem to privilege a vision at the edge of the unfinished: in principle, it emphasizes a series of lines that, in the work of others, could be interpreted as guides. Whoever observes any of his canvases may imagine being facing a mere study, the preliminary instance of a project in perpetual execution; if we described them as buildings, we might think of them as overwhelmed by forgotten scaffolding or overtly visible pipes: the two-dimensional version of the Pompidou Center. However, the reiteration of these marks leads us to conclude that they constitute, instead, a voluntary feature of style: Giacometti distrusts both the mimetic structure of the classic portrait and the stroboscopic impulse of cubist art. In The Artist’s Mother (1950), the figure of the old woman is located at the center of a space that appears decorated with a polychrome web. The pattern serves as a veil, to hinder the clarity of any entity. It may be said that it shows a body in the instant of its appearance inside a room that did not exist previously. The piece is composed as a concentrated exercise of the new –of what had not been exhibited before except as a theorem or fantasy. It is, simultaneously, cadastral practice and philosophical treatise. Yves Bonnefoy sums it up well:  l’art devient instauration d’être – art becomes the establishment of being (18). 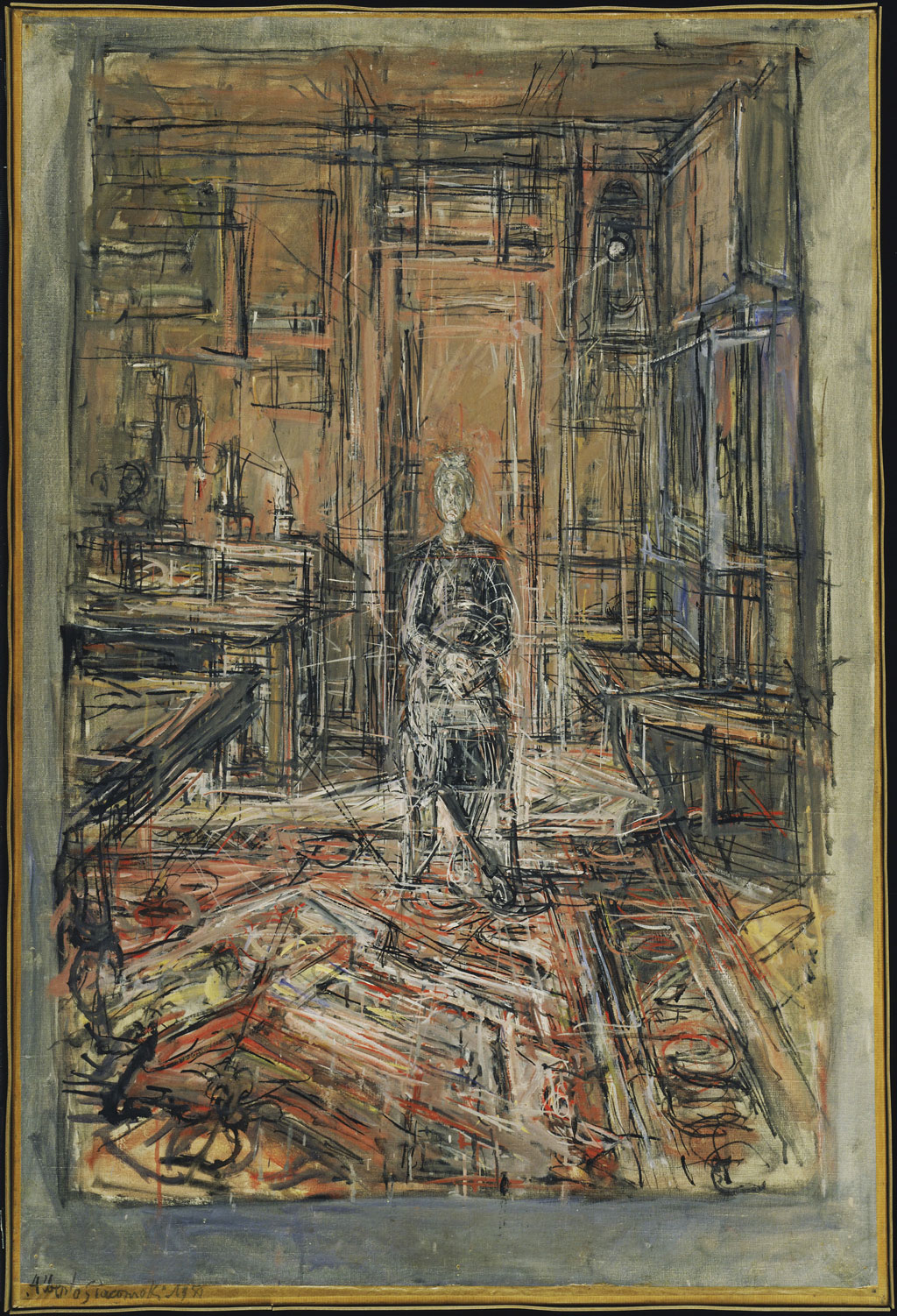 A somewhat hyperbolic reading could make us consider this woman a victim: the “net” metaphor sets her before us as virtual prey. I am less interested, I confess, in the Freudian derivation of this: the trauma or symptom that the orthodoxy would like to uncover as hidden-but-ultimately-discernible background. I prefer the evidence unmasked: the friction calculated by Giacometti and sustained by the stripes distributed, like blows of an axe, upon the surface. Within its format, the piece accepts the conclusive and the preparatory, the misconception of the unclear, the system of immaturity that ceases to be defined in opposition to that which has acquired its flesh and its skeleton. The fulfillment of art does not pass, therefore, by the culminating certainty of the «finished» painting. In any case, the notion of ending has been distorted enough that it is now a simple reactive ideal, not an irrefutable prescription.

I like to think that Giacometti makes an ironic comment on the fate of Paolo Uccello –Marcel Schwob’s character, not the historical man. In an account included in Imaginary Lives (1896), Schwob details the Italian painter’s geometric passion. Fascinated by the mechanism of perspective, “Paolo the Bird” obsessively focuses on drawing strokes with numerical perfection, like devices dreamed by a Euclidean god; these objects he calls mazocchi. «He also represented all animals and their movements, and the animals and gestures of men, in order to reduce them to their essential lines» (118). His constant work was linked, therefore, to the representation of a metaphysics demarcated by its angles and curvatures. The French writer compares the artist with an alchemist: «He tried to conceive of the created universe as reflected in the eye of God, which sees all the figures emerge from a complex center.» The analogy sums up a purpose: to eliminate from painting what is only conceived as an ornament, badly placed on the absolute entities of theology.

Even affection a series of vector magnitudes for Uccello: one afternoon he met a thirteen-year-old girl, whom he took in to save her from mistreatment; her name was Selvaggia. Paolo paid little attention to her, for he devoted himself entirely to the design of «universal forms.» Selvaggia «never understood that Uccello might prefer to lose himself in that labyrinth of straight and curved lines than to contemplate the tender face that rose towards him» (120). The painter’s devotion to these schemes prevented him from making a living, and soon afterward the child died, but not even that could distract Paolo the Bird from his task: «Uccello represented the stiffness of her body, the union of her fleshless hands, and the line of her poor, closed eyes. He did not know that she was dead, just as he had not known that she was alive» (121). Over the years, he himself died of starvation, after finishing a portrait of St. Thomas touching the sore of Christ; those who saw the work knew that the man had sunk into a «confused mass of lines» (121).

Schwob’s text operates as a generator of antinomies: The counterpart to Uccello’s perdition is his genius, which allows him to do without the explicit rigor of straight lines and other graphic cues. There would be plenty of naturalness in the trade of those who can create without the net of perspective, or within the negation of it. Wasn’t the protagonist of Henri-Georges Clouzot’s Le mystère Picasso (1956) an example of absorption into an unconscious realm, depleted of milestones and clear spatial references? The hand moves on a grid-less expanse, as would the hand of a god when illustrating ex-nihilo: between the initial moment of the universe and the emergence of the very first half-silhouette, an act of pure freehand imagination.

For Giacometti, nothingness is replete with «futile» additions. I suppose that this redefines our bond with a work of art: the principle of necessity is no longer its primordial element and the blurring of the essential takes center. A portrait becomes a clogged manifestation of a person in the presence of inorganic spots, the parody of the original’s aura, a mediumistic solemnity. Even the environment is less exposed in the segregation of contours than in their contagion. Paradoxically, each object retains its autonomy: the miracle of transparent dirt happens. Sharpness is, perhaps, a simple derivation of convention, and what we observe is not organized in the retina but in experience.

Strikethrough writing is the literary equivalent of those paintings by Alberto Giacometti. I quote a fragment by Amy Catanzano:

I will not translate the verses, but it must be said that each one of them is certainly translatable. Its reading is not precluded by the strikethrough The effect is ambiguous: the poem is constructed as a text that is rejected but does not disappear, censored in vain, with the laxity of clumsy politics. It is, in short, a zombie speech that proclaims the literary condition of indefinition; the reference to Erwin Schrödinger supports this character. Catanzano herself explains: “Schrödinger’s cat is alive and dead at the same time. The poem is readable and not. The strikethrough is simultaneously a gesture and a gimmick” (Rothenberg). Like the portrait of the Swiss artist, words have the appearance of elements that partially appear and flee, to the point that we do not get to know if they refuse to be fixed or choose to remain as ectoplasms. Perhaps this nature confirms what Borges wrote at the end of The Wall and the Books: “This imminence of a revelation, which does not occur, is perhaps the aesthetic fact.”

The mother of Alberto Giacometti and the syntagma of Amy Catanzano are like signs of a fundamental opacity. They reiterate the specter of a subjectivity that can no longer thicken and cannot submit to a hegemonic idea –the god who rules it does not share the fervor of Marcel Schwob’s fictional Uccello. The belief that might survive must accept its transience, like a beautiful firework or, finally, like will-o’-the-wisp.