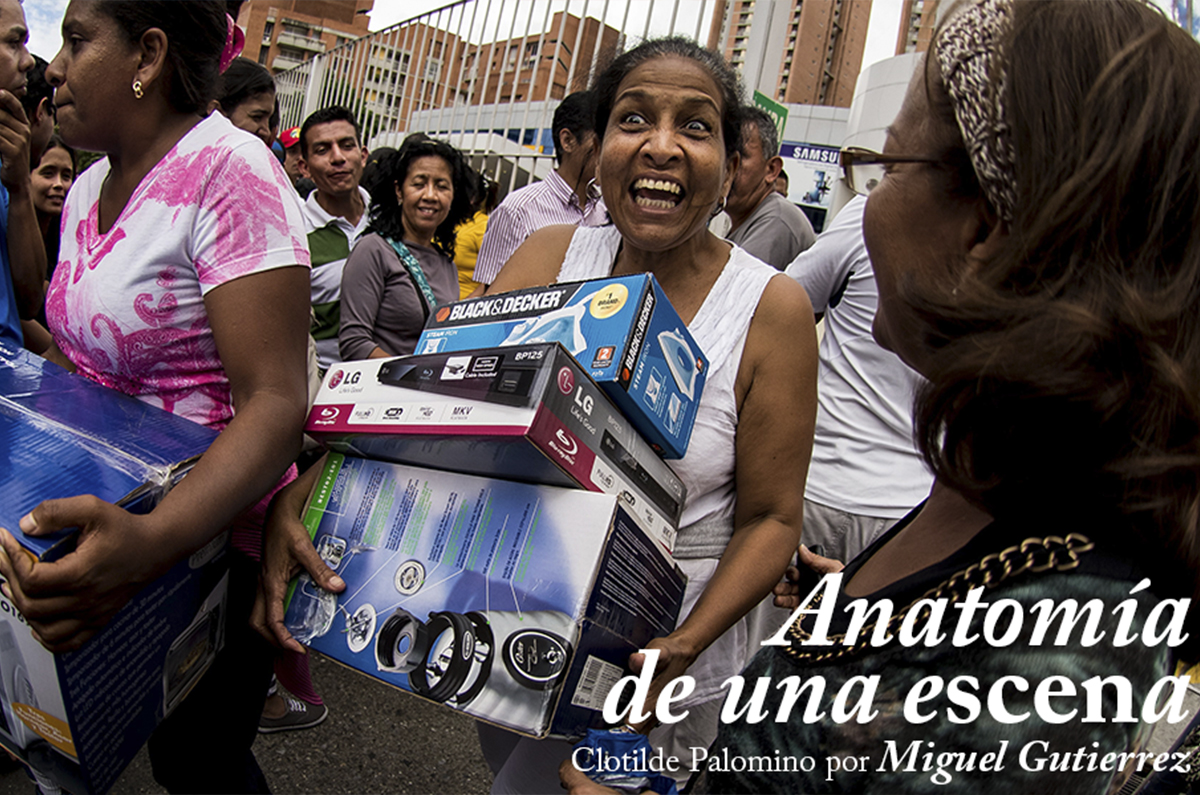 On the evening of Friday, November the 8th, 2013, Venezuelan President Nicolás Maduro announced economic measures that would «benefit» the Venezuelan people. Among these measures was an order to place price controls on all the products in the Daka appliance chain stores. People from different cities in the country decided to head to their closest Daka and get products for sale that very night. The next morning, hundreds of people were waiting in line outside the stores.

This photograph is part of a series that documents the reaction of citizens to those government announcements made hours earlier. The goal was to represent the general situation, but also to capture the emotions of the people who were waiting, buying, and leaving the stores.

By developing a journalistic «sense of smell,» you can foresee certain events –without predicting them, of course. But there exist factors that can alter the logical order and unleash surprises. At the time of the image, I was planning to photograph the first shopper of the day, but the man –who had bought a refrigerator– had to sign the warranty before leaving. Then, Clotilde Palomino, the second shopper of the day, exited the store. To her surprise, she encountered reporters and photographers on the way out: «Ay comadre, this is like joligud (hollywood)» («Oh sister, this is like Hollywood!»), she said, both joyful and nervous due to the cameras, to her companion.

I wanted to capture her arms, full of boxes, and her face. It was the summary of the entire situation.

Too much information and misinformation go hand in hand. Many print and audiovisual media carried headlines on the economic measures. Rumors and baseless reports spread on social networks, warning of «looting» and opportunism in Daka stores.

Many people rely on the reports of international news agencies, and that day, Venezuela was featured in these news channels because of two events: the economic measures, and the victory in the 2013 Miss Universe pageant. Among puns, suspense, and humor, the images of Clotilde Palomino and (Miss Venezuela) María Isler became viral through comparisons that read «Beauty and the Beast», «The Daka Looter», «Maduro’s Opportunist,» among other motes.

* About the artist:
Miguel Gutiérrez (1983, Bogotá) is a graphic reporter who currently directs the photography division at the international news agency EFE in Caracas. From 2010 to 2011, he worked covering last minute news, politics, and sports in Venezuela for the Agence France-Presse. His photographs have been published in The New York Times, The Washington Post, The United Nations, ESPN, Sport Illustrated, Le Monde, and The Guardian. In addition to working full time for EFE, Gutiérrez also photographed social campaigns and special assignments documenting the refugee situation in Colombia for UNHCR-Venezuela.

Gutiérrez has worked for 8 years as a full time professional photographer, and holds a degree in Social Communication from the Santa Rosa Catholic University.