The Codices of Consuelo Méndez

Writing in the narrow sense ––and phonetic writing above all–– is rooted in the past of non-linear writing. It had to be defeated, and here one can speak, if one wishes, of technical success; it is assured a greater security and greater possibilities of capitalization in a dangerous and anguishing world.

Emmanuel Lévinas. Humanism of the Other

My life is annotated. 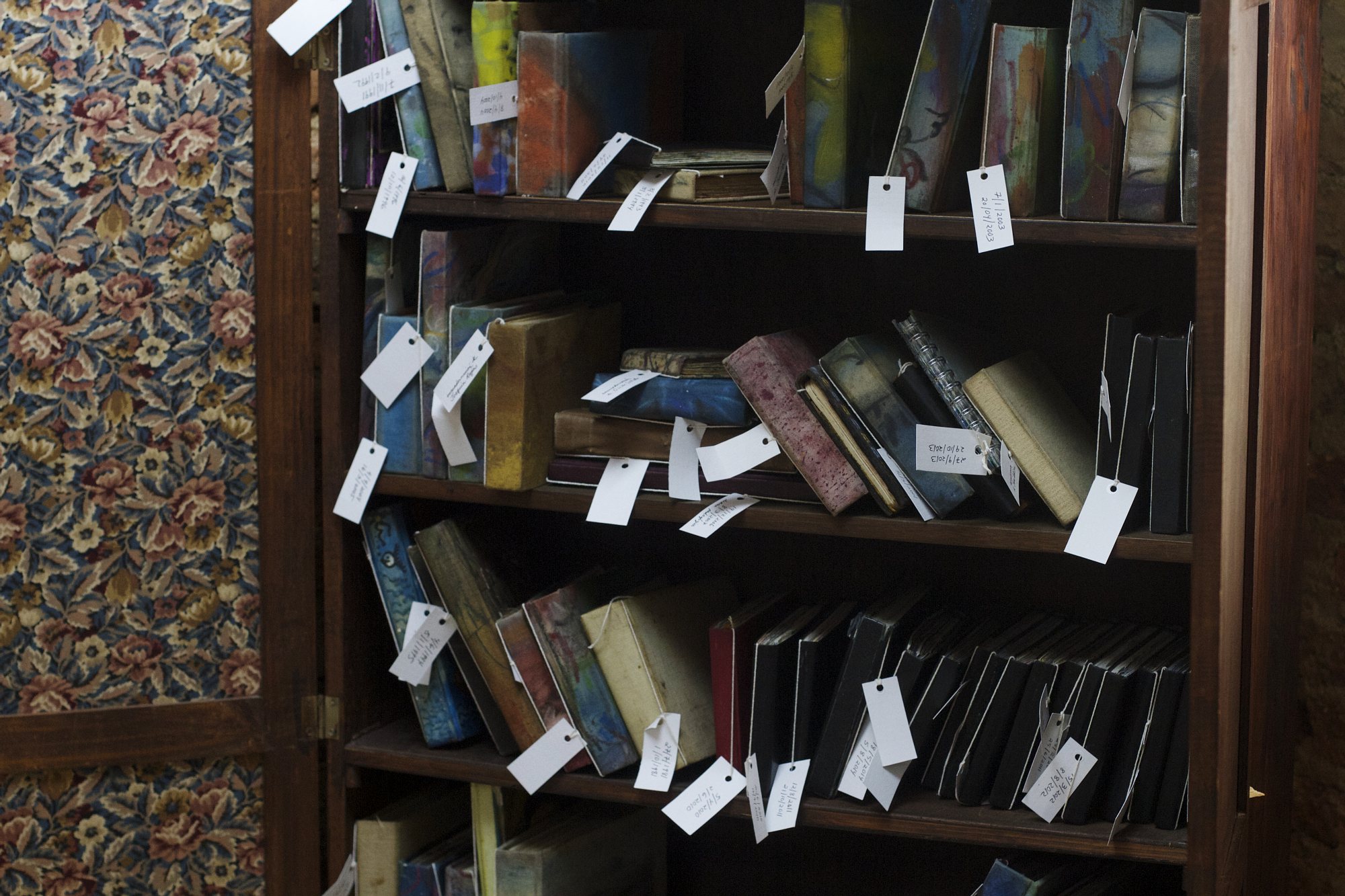 Trace, stroke, inscription. Expression seeks to be channeled by the forms presented by culture. There ––here––, writing is proposed as an expression of the mind-voice, and the pictorial image as something that resembles, represents, simulates, interprets, or overshadows the exterior.

Writing is held closest to thought. This idea comes from the articulating sensation produced between the linearity of the alphabetic (phonetic) system and the sequential temporality of the word-voice. The (still) image, however, is not sequential or temporal but spatial and therefore is held as something closer to the body.

In this ambivalent persistence, there is a sort of overflowing of thought by the image, while in the voice (canalized by writing) a certain ordering is “perceived,” and therefore a more or less adequate transmission of thought. Writing, once convened in words, is what is considered the proper vehicle of the voice, its not too corporal body; an accepted, measured, adjusted spatialization. Thus, we think that speech derives (initiates, originates) writing. We think that saying precedes the representation of sound. Who can doubt that this is so? After all ––we assume––, we first learn to speak and then to write.

If the “voice/writing” rests on one shore, and the “image” rests on the other, traversing them by the hand of Consuelo Méndez holds an extremely rich, exuberant route, though contained in the intimate spaces of the notebook and the book, with functions ranging from the private diary to the class notebook: confessions, thoughts, quotes, and projects that at a certain time began to confound (actually, to merge and to mix) word and image; the latter as drawing, painting, figure, and abstraction. Signs, gestures.

Writing first. Painting later. Then, both these shores disappear because the two sides converge. On one bank, next to the writing that establishes adolescent confession, is Consuelo’s period in the United States. Things change a bit later, and a trace without grammatical order is required. 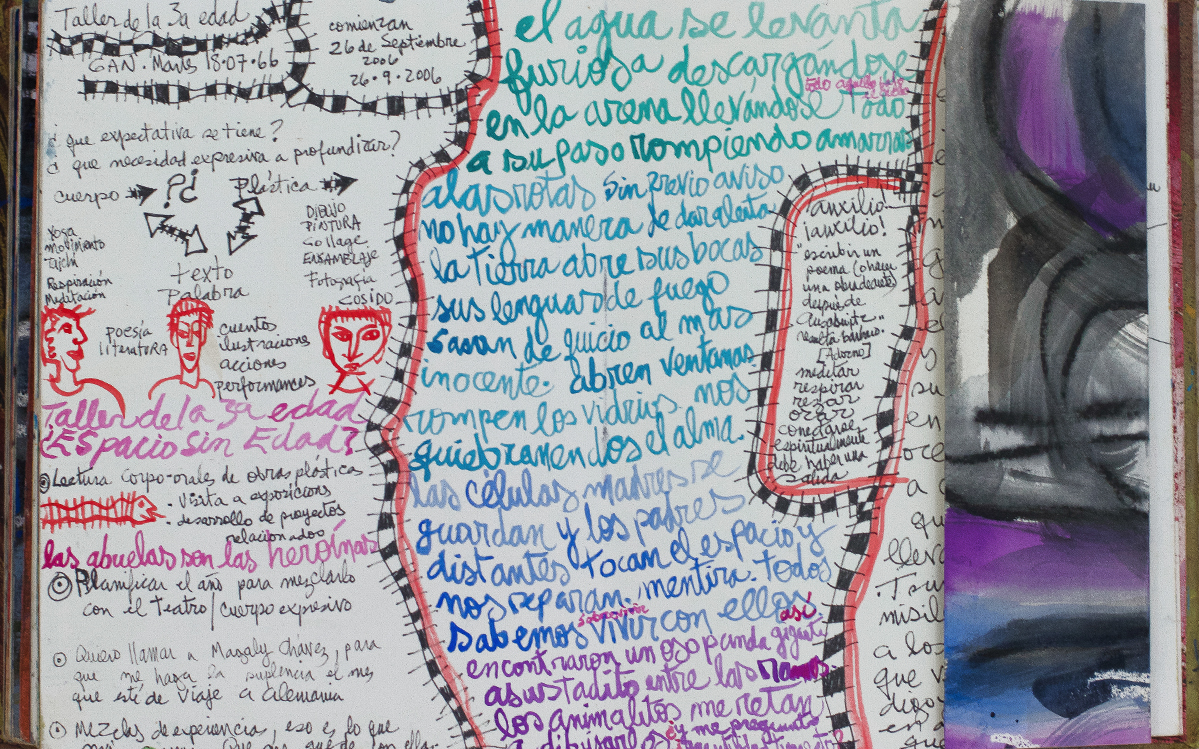 —This selection I made for the installation Cruzando orillas starts in 1976 when I arrived in Venezuela after my formative teenage years in the United States. At the time I worked on two types of diaries, one where I drew and another where I wrote. I had not realized that the visual image could narrate, or could be with words. When I entered the Cegra, my first artistic experience in Venezuela, from 1979 to 1981, and I began to connect with other artists from the country, I began to mobilize my work in a different way; later, visual expression began to join written expression. And the diaries changed. 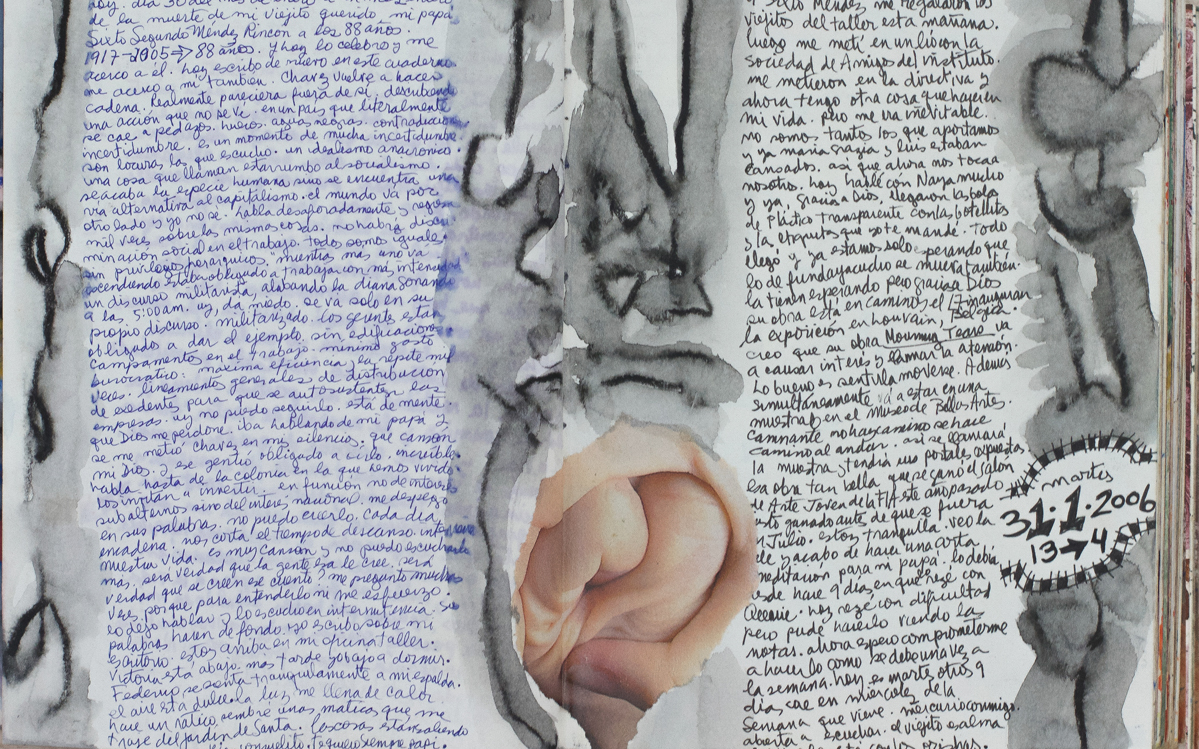 — I began to illuminate my texts because usually I write and then do the drawings. But sometimes it’s simultaneous.

—Was there an intellectual work behind this integration?

— It just happened, it flowed out of my work.

—Can it be said that writing and painting are two intermingling forces?

—Yes. I wrote and I began to allow these notebooks to be part of my emotionality…

—Towards the end of 1990, the notebooks began to heterogenize and become more complex.

—Are they much more painting than writing now?

— No: fifty percent each expression. Sometimes I write more, sometimes I draw more. It depends on what I am preparing or what is happening. There are workshop notes, there are prints, pen drawings…

—There are no functions or discriminations. It is an intimate diary and at the same time a notebook of work notes. 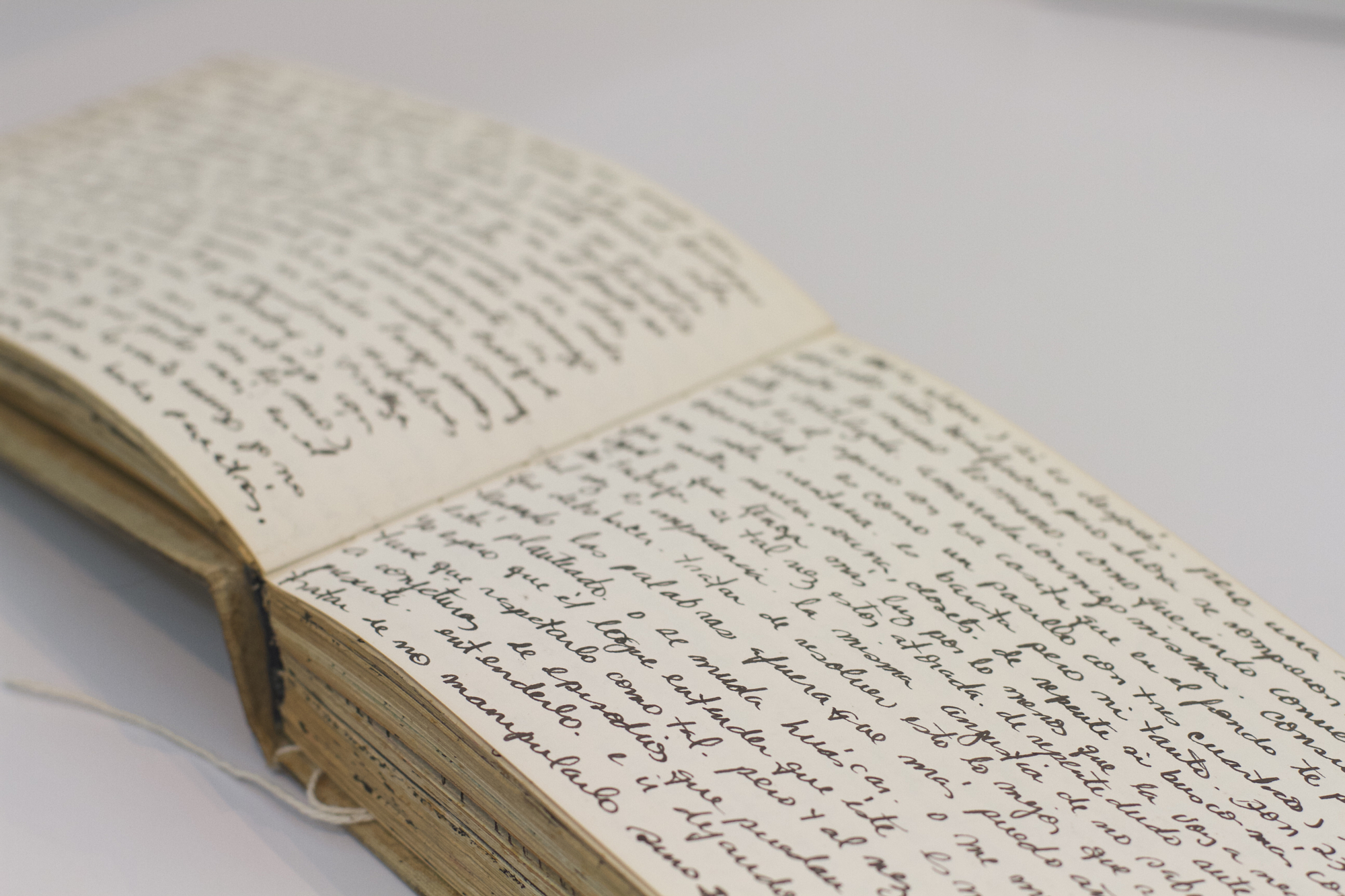 —It’s all integrated. There might be some that are almost all drawn. I see writing and drawing-painting as expressions that are integrated in me. It is one thing to say it with words and another is to say it with spots and colors. I think it has to do with the way we express ourselves. The written word has always been with me. Painting was always with me; I studied art. But there was a moment in my life, before I came to Venezuela, when things were separated. When I arrived in 1976 and had my daughter and started to study and work, things merged.

Drawing and painting open space among the pages of the notebooks, in the annotations, between quotations, confessions, poems, reflections, experiences, longings, despair, joy, visions. The image streams into the written notebooks and literally opens space for itself amidst the voice-writing; they negotiate their forces and begin a kind of coexistence, alternation and simultaneity in Consuelo: in the books. As she begins to work around the body, the image unfolds and gradually acquires a joyful or dramatic rhythm, a sort of dance or confrontation with the written word. You cannot make notes with images, but you can with drawings. And we cannot express spatial experience ––movement and body–– with linear writing. Everything is integrated in Consuelo’s artistic process and in her notebooks, which appear more like illuminated codices the more recent their date. 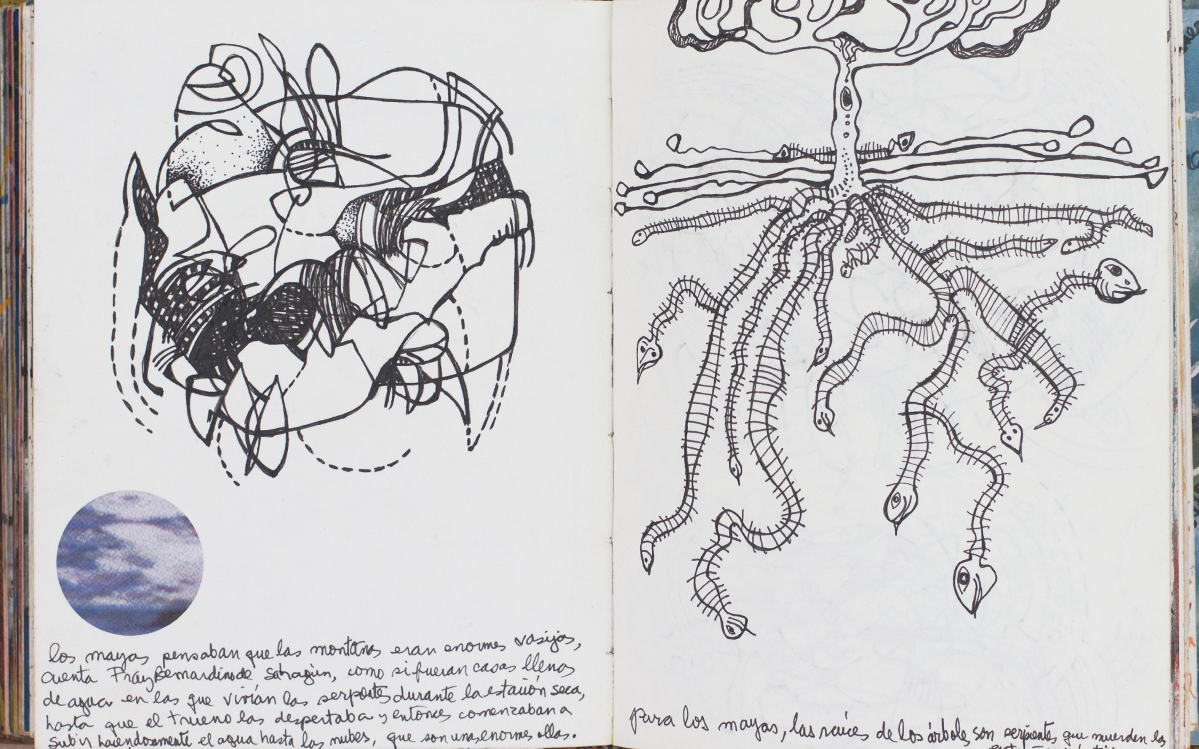 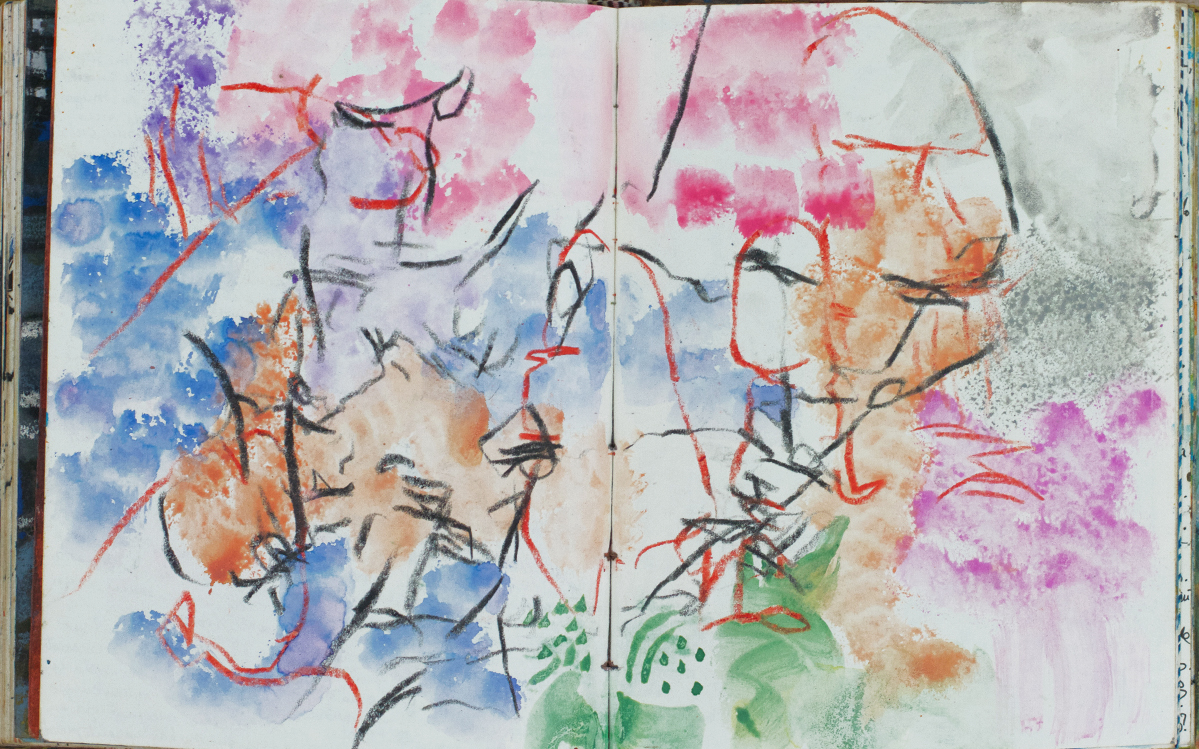 — Why did you call the installation at Backroom Caracas Cruzando orillas? Is it because you go from writing to painting, from norm to excess?

— It is daring to take all my diaries and show them to people. For this, people must cross from their shore to my shore, to my side. Who enters my side enters a world that is another world. I am also crossing to the other side, towards people, in a way that I never imagined.

— What do you think such an opening can give you? What can it offer? It can be a way to really open yourself to others.

The rules come after the inscription. Writing, so ordered, with these semicolons, and in words that do not look like images,  canalizes thought. What does the image do then? Does it overflow? Does it express another part of the mind? Does it connect different situations?

As an alternative to the naturalization that assumes that thought is composed of language, it is possible to think that between written expression and pictorial expression a displaced relation is mediated, with or without ordered ––regulated–– thought, or with the foundational stroke of culture, and therefore of the human. It is for this reason, perhaps, that attending briefly to the relationship between word and image ––understood as everything that can make impression or inscription possible–– can become so surprising, so rich in suggestions, even in revelations and unveilings. 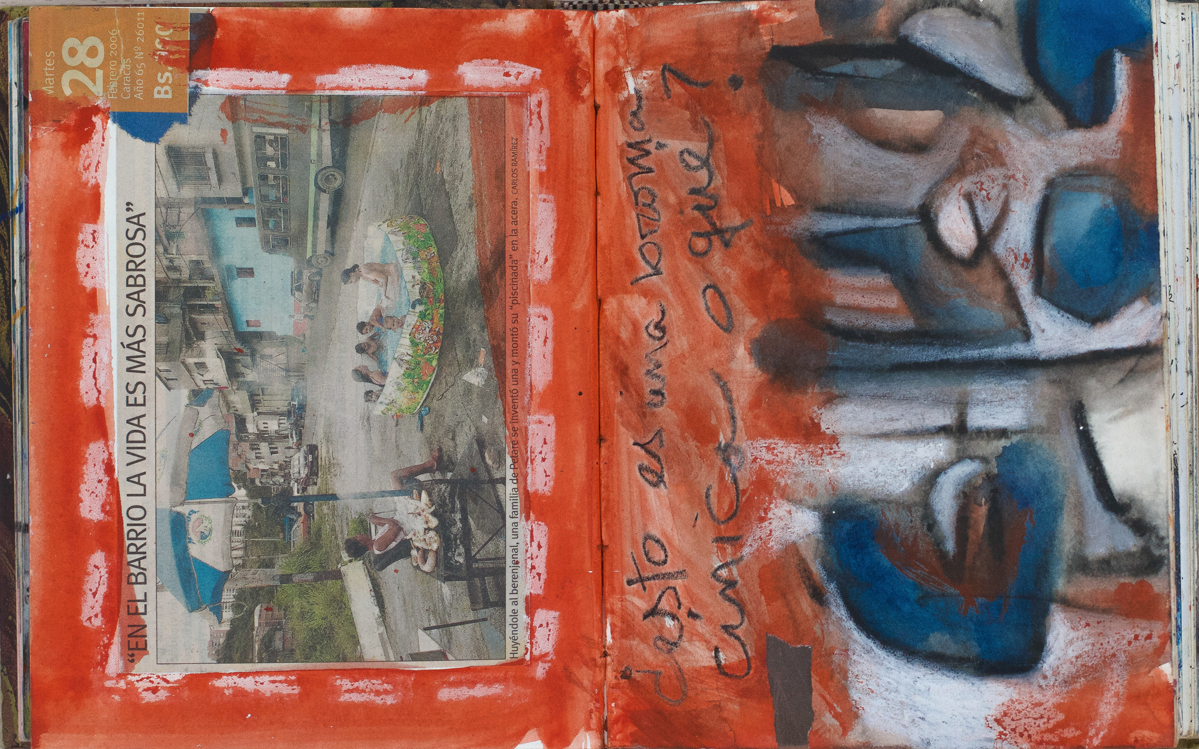 ––What do you think of this situation in which the book has been able to receive all this confluence of painting and texts? Why is this confluence between writing and painting expressed in your journals? Was the painting too intense to be contained in the book before you tried? 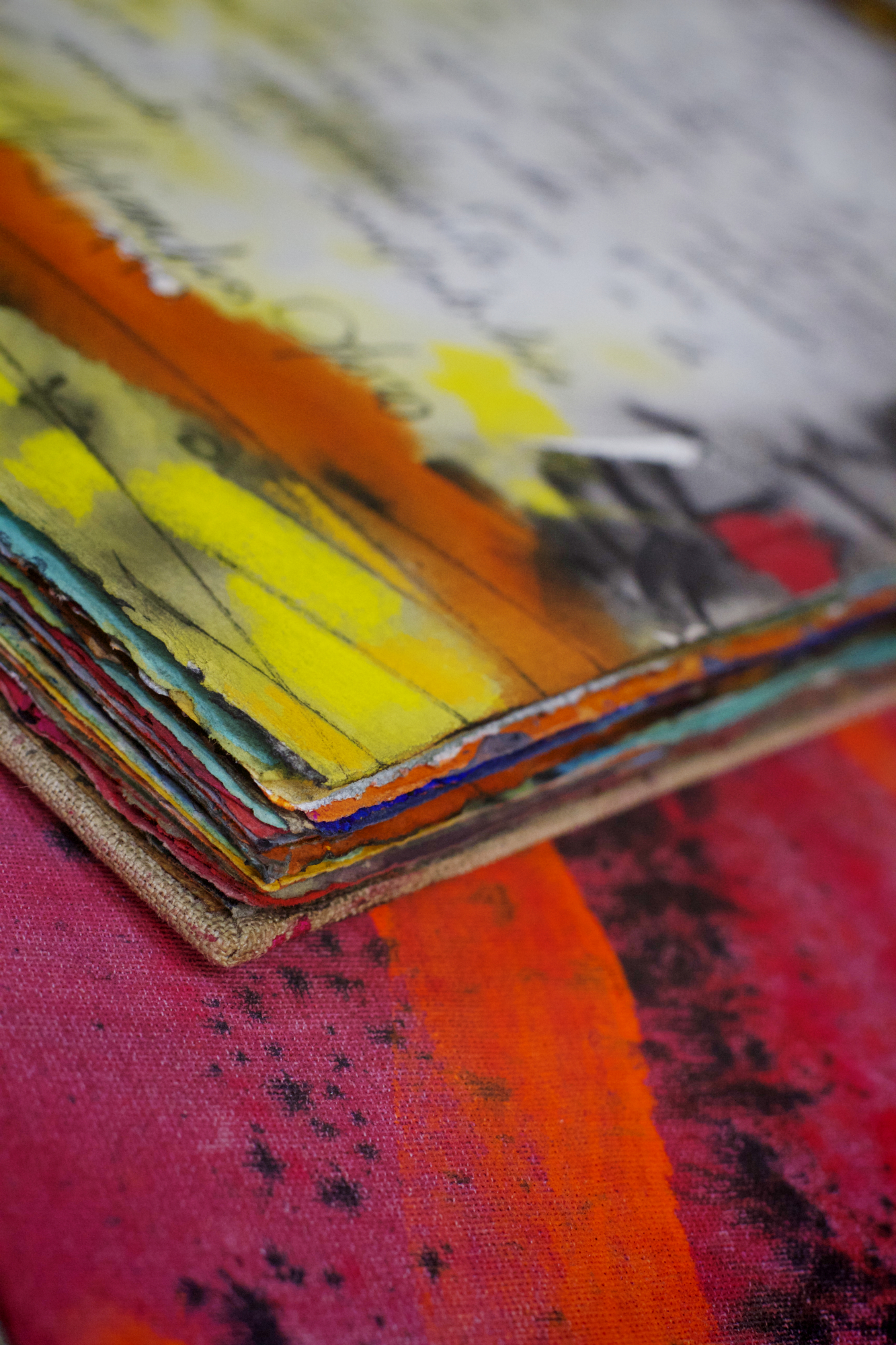 —They were two vehicles, two spaces. The book was a book: I read it, I wrote it. The image was another language. It was painting, it was a product, it was the drawings, the paper… But I had not married the two expressions. And I think they combined because they could perfectly be together. In American art formation, the diary is very important: one had to keep a diary, it was obligatory. In my training, it was a requirement to have a bank of ideas. And ideas are words, or images, or a piece of a ticket, or things that you read and collect. The diary is an album. I think that, as I matured, my expressive process became bound to the book because I am a book collector. I like paper. What I have read most is poetry; what I have read least is philosophy.

… I always kept a diary. I would write and draw in meetings. Then, little by little, the diaries merged into the Escuela de Arte Superior Armando Reverón (now part of UNEARTE), and were also influenced by art therapy. When you work in art therapy you work with the body, and it’s all about integration. So my word was integrated and my image was integrated. That was around 1995.

— So the physical or spatial integration made possible the integration of writing and painting in the book.

— Was it then that the painting flowed out of the canvas into other spaces?

— It entered the body as a fundamental tool of expression, and that changed my pedagogy of drawing. We come from a culture that believes that it is the mind and the hand that draw, but it is the body. If you breathe, you sing; if you don’t breathe, you can’t sing. It is not gratuitous to say that the artist is inspired to paint. To breathe is to inhale in and exhale out, and there enters the voice, the movement. There are my pedagogical notebooks.

—So the journal-function was exceeded by these notebooks. 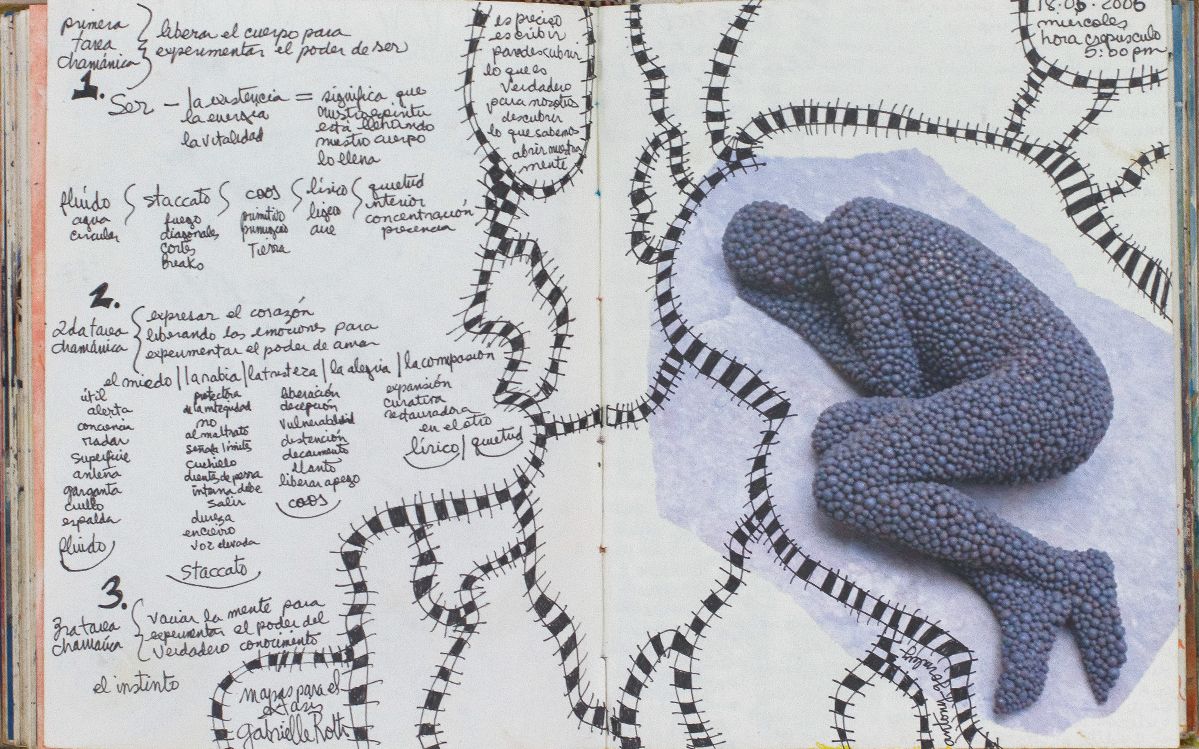 Can we think of the simultaneity between speech and inscription? In their mutual dependence? In the impossibility of putting one before the other? If we were to expand what we understand by ‘writing,’ if we were to say that writing is, like the imprint, an inscription, and not signs that represent sound and that both the voice and the trace have the same origin, the entire order of cultural signification would become more open to the other: to the other who writes only with drawings and the other who inscribes only with the voice. Also, to the other that I am not but that is in me, that affects me in spite of my indispensable self-absorption.

Another that I not only inscribe in my understandings but which also overspills, as an illegible image, into what E. Lévinas designated as the face and its infinity. The face of the other offers us a resistance, even if not hostile, even if peaceful opposition. Therefore, it would be violent to ignore or obliterate that opposition.

How to open up to the other? Perhaps just as a book is opened –with its bound pages opposing, precisely, the opening while it is being opened? 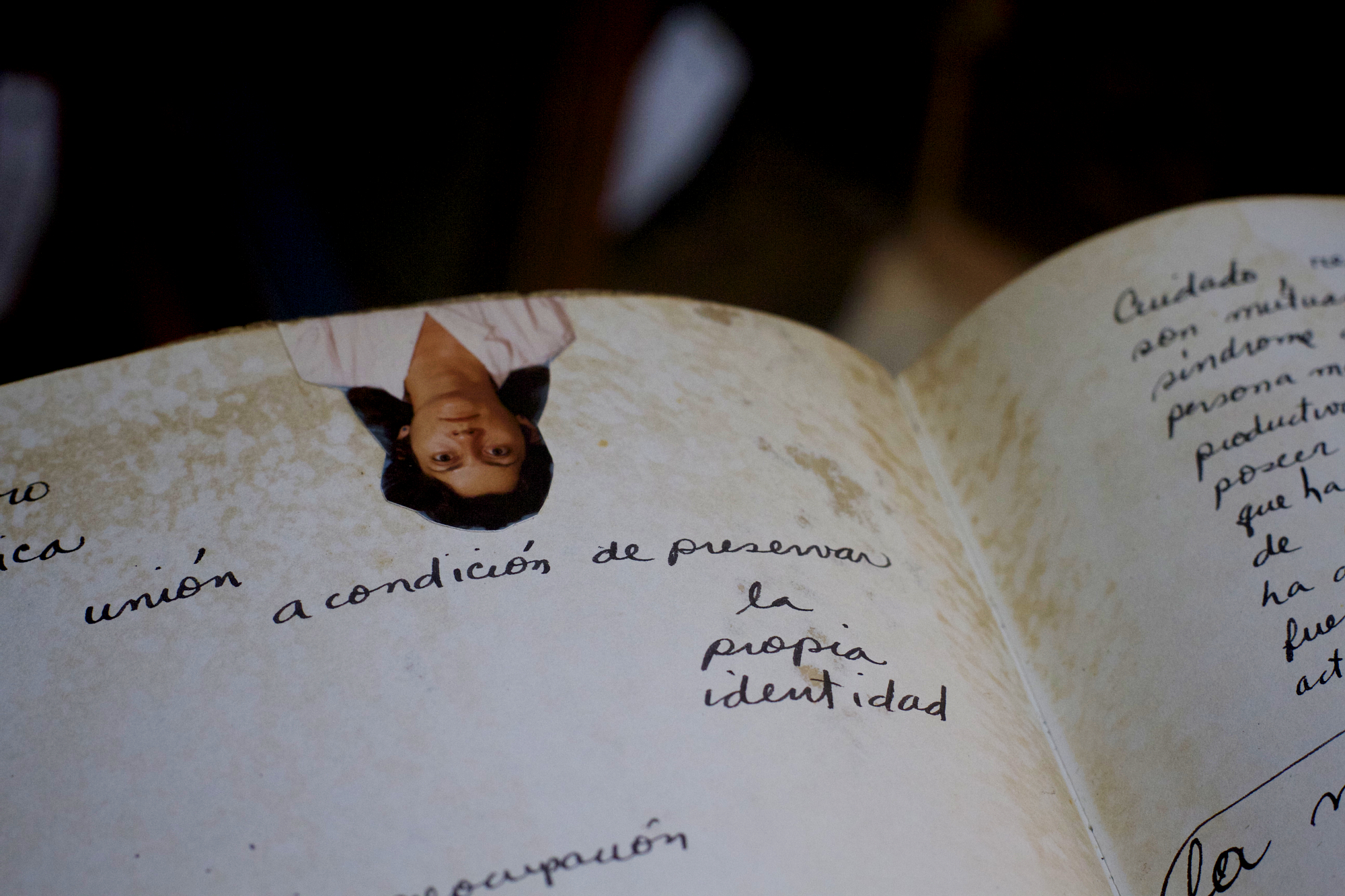 — I never imagined that I would show my notebooks.

— Have you found a source of knowledge in that openness?

— So to open these journals is to be consistent with that openness? It could be an overexposure, but it could also be an act of great coherence towards yourself.

—It’s possible. I had not seen it that way.

—Have chosen to be an open book in order to grow?

— Yes. But it has to do with the nature of expression. When I began to perform, it changed the way I expressed myself. The other is important. 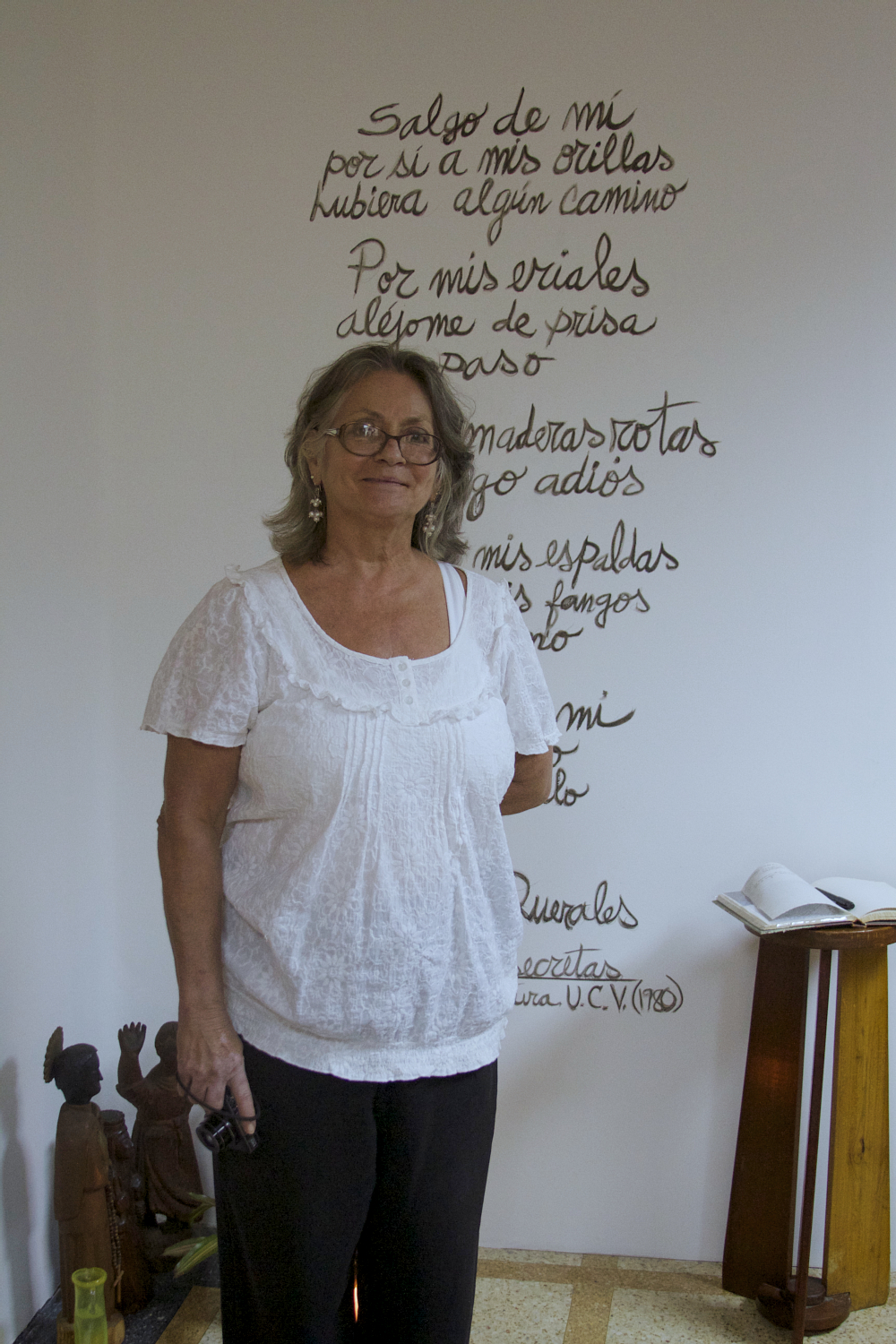