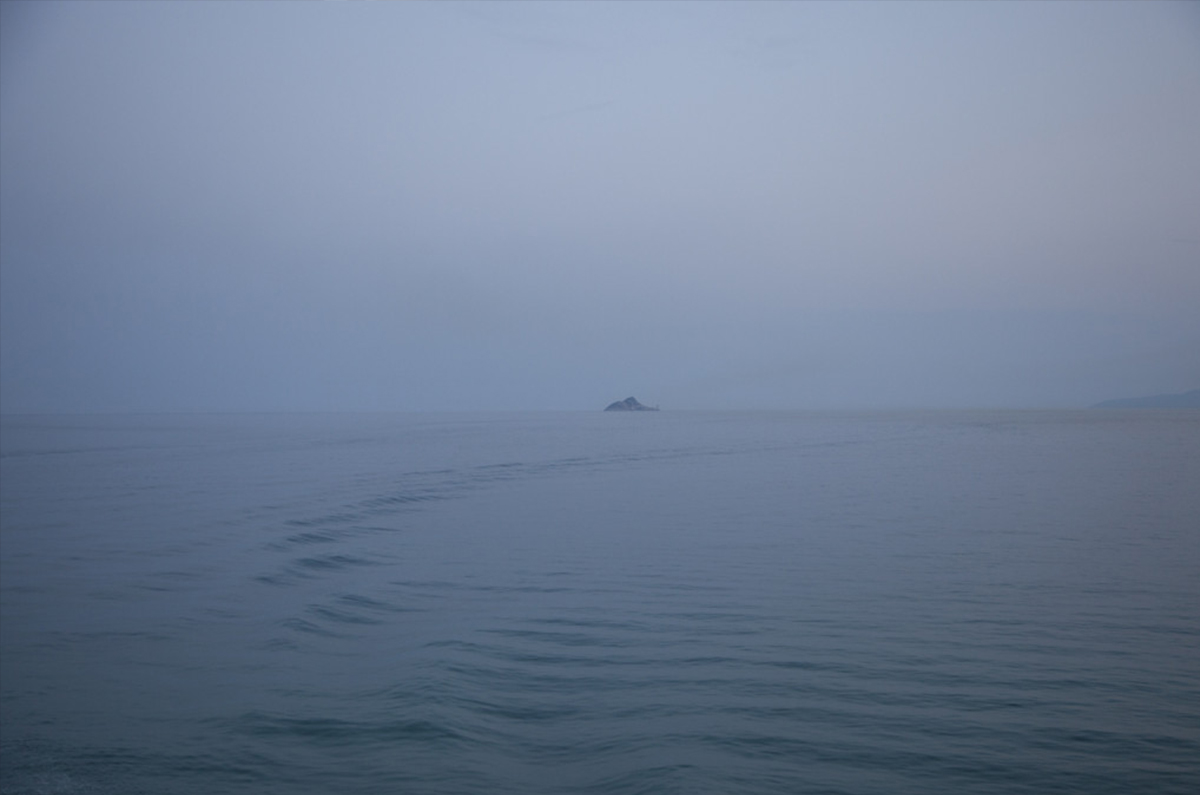 Before the memory of the islands dissipates, we have decided to try and revive what we experienced, which in this case is not about talking about this or that street, such and such park, a magnificent exhibition, an absurd monument or a historical place. It’s something different. An island is always something ‘other,’ even if we are inside a museum, even if a house is a house, even if the streets are similar to continental streets. An island, as Gertrud Stein’s rose, is an island is an island is an island. And though it contains the word [‘insula’], a peninsula is distanced from the notion because paene means «almost»; it is grasped to the continent with one hand or one foot, failing to evoke the unity of an island. For the island rises without apparent moorings, stationed inside that overpowering giant.

The trip to the islands was a strange experience, like a journey to the origin of something lost, to the beginning or the end of a continental break, to a unique place such as one, lone, isola, isolated, island. A body that shows its raised belly, that is born and dies in itself, a drowning that gives birth, and a site par excellence to build a prison and bury a treasure. Islands are fortresses, castles guarded by sea monsters that emerge from the image of a piece of land surrounded by water.

The first of our two stops in the Tuscan archipelago was on the largest one: l’isola d’Elba, where we arrived from Piombino, after three hours by car from Florence and an hour’s journey in a traghetto belonging to the Moby house. The name of the line immediately summoned the great white whale, Ishmael, and Captain Ahab and his crew, though the Moby Love sign hanging from one of the bridges in the ship broke the charm of an adventurous voyage for a moment. But why not? We quickly turned our mood around, decided to become ‘Moby lovers,’ and continue to enjoy, panino and Moretti in hand, this obsession shared with Herman Melville, Philip Hoare, and Ana Khan, among others.

The course was relaxing: a docile sea swayed us without spilling the contents of our glasses and allowed us to talk and take photographs, welcome the breeze, and also balance our eyes before a map of the island in the shape of a whale. Tosca joined us in this undulating journey and turned the chronicle into a «three for the road,” away from the Roman malice of Scarpia and closer to what was one of Napoleon’s residences. But Elba—we would confirm it there—is more likely to hold small secret treasures rather than great booties and epic legends. If Napoleon was there and escaped, good for him. Historical strictures aside, we prefer to take on Alighiero Boetti’s experimental non parto, non resto and its cartography, and draw some paths with our left hands.

We left Florence behind—with its monuments and solemn names, with its tourists that crush their faces against their hot cameras or hold masts that snap portraits—to focus on the tiny stories that appeared as soon as we struck Portoferraio. Stories without history.

We picked up the key to the little house we rented near Magazzini in an insipid office. The way from Portoferraio was not meant to be very long, but in Elba all roads lead to the same places in different lapses of time. What should have been a 15-minute journey became a circular hour-and-a-half odyssey. An island distributes its exits perimetrally, and one and the other are very much alike. The indications they gave us, roughly translated into mundane English, were something like this: pass by the side of a long fence with vineyards, turn right where there is a big sign for an elbano wine, and turn left after a while, when you are leaving a grove behind.

Everything deep into Elba is fields, green, soil, and small crops, “organic” avant la lettre. Tuscan people do not follow the trend of growing without fertilizers, nor are they attached to the new and old diets rediscovered and redistributed by the various markets; they are ecologists just because. They don’t use fertilizers or chemicals because they don’t, and they are naturists because life is natural. They have a deal with the land that goes like this: garden, fresh produce, recycled crates, a small stall in a green meadow that sells wine, oil, beer, vegetables, and fruit, no signs or claims or stridencies, and with a pretty gratuitous bad temper, sometimes… For the character that boils the blood of some Latin Americans comes, in no small manner, from the grinding of teeth, the manual gestures, and the blows to the air of Italians: tua sorella! The mother remains untouchable in this matriarchy that begins with the cultivation of the land.

That lost hour-and-a-half was worth it. How much scent. As we drove away from the sea that surrounded us, the fields, also marine, were repeated in waves, and led us to an unstoppable green. But we had to leave our visions and our luggage and try to reach our temporary home. We called our host, who replied: ma perchè vi siete persi? È molto facile arrivare a casa!  Without a doubt, it was very easy for Roberto to locate every corner of the island where he was born, grown up, and stayed: he is one of its 32,000 inhabitants.

The house turned out to be simple and clean, with a beautiful view and the wonderful surprise of an open yet private garden shower. From there, we retrieve memories of branch scratches and the occasional infected spider bite. Don’t let them tell you that it is only in the Tropics where bugs attack: in the hills of this island that floats between the Tyrrhenian Sea and the Ligurian Sea, insects—and especially spiders—contain a poison that is neither docile nor fleeting. We assumed this to be an invitation to get stung and poisoned by the island, alternating anchovies, tomatoes, beer, wine, and antibiotics.

Given the shortness of our stay, we visited only a few beaches and villages: Magazzini, Lacona, Laconella, Capo della Stella, Capoliveri, Topinetti. We had to flee from Lacona because, in the middle of summer, with the summer hit and the colors of summer, the magic of the island was diluted there to give way to a sort of onshore-music-cruise. Pum pum pum streamed out of huts filled with people and glasses and sand, pam pam pam, the orange, blue, and green of swimsuits choking our eyes, asses packed in flag-stamped lycras, a sound of regaettecnotón or some uncertain new musical style, phosphorescent slides and platforms. What happened? Did we change the channel? Are we beach zapping? Where is the solitude and the island-isola-lone? PUM PUM PUM through the vibrating speakers, our faces in resonance. Why come this far to think of islands as musical threads? The crowd on the shore, weakened by the weight and the cracked sound of plastics and beach balls, and it’s so hot, and towels, and the tide of people as the sea yawns. What do people seek among so many people? Where are the isolates? An island is an island is an island, yes, Stein, but è vero, it’s summer!

As Magris points out, during a journey, as strangers among strangers, we learn how to be Nobody in a strong sense, and finally, we learn who we are. At one end of the overcrowded island, it could sink and drag us to the void; it could be simply the summer resort of many—we among them—. «We,» as something dissolving in the crowd, becoming Nobody. Lost in chaos, the outline of the place vanished in the crowd. We turned to other less exposed, lonelier beaches, seeking refuge to remain Nobody among more isolated strangers, and thus able to think again of the concept of «island».

We arrived at more pleasant shores where we felt the architecture dissolved as a continuity of nature: walls that were one with plants and stones and roads and mountains and sand; people searching for some treasure, or catching butterflies or something hidden, like spiders, in the small forest next to the sea, or among the rocks, submerged or floating with faces covered in rags, talking on the shore of Bergman dragged by the heat in Stromboli like Mangano by hunger and illumination in Il miracolo, thinking of Rossellini and the South (although this is the Northwest) with masks on to search for something still buried and see the fish face to face, assembling stones to build an ephemeral drawing that will be dragged out or into a museum that will last whatever the tide allows, and the next day: to go back and to find the same steep downward paths and then climb up, aware that the island is still there, even when we, the vacationers, return to our routines and leave it behind with its stones, its earth, its sea, its living, and its dead.