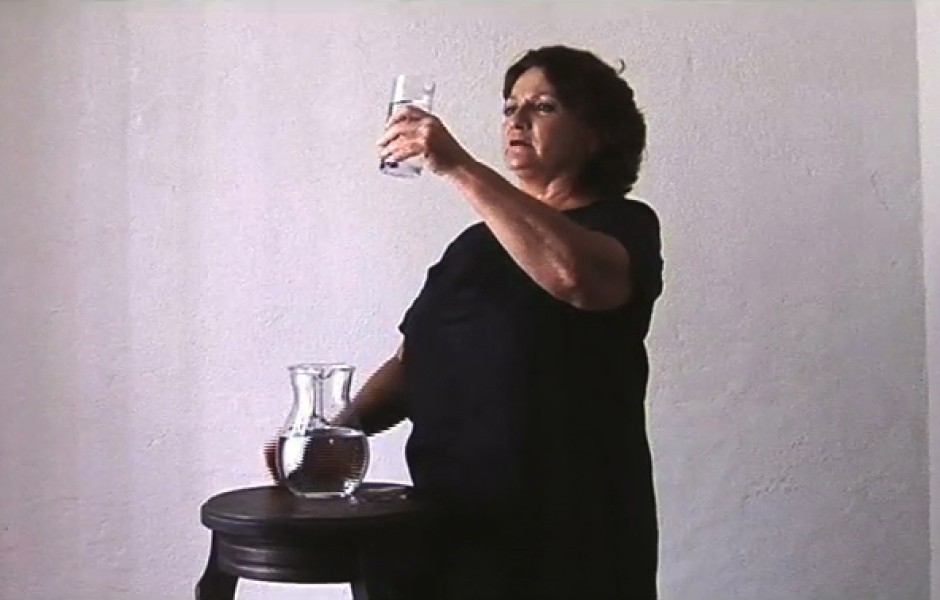 The fountainwoman, one of my archetypal female characters, is activated through presence in the art action La Vaguada [The Trough], because «we carry the rain deep inside.» She sings hymns from her guts and drowns in the water.

This action was born in 2005, when I found a news clipping in my archives about a girl being rescued from the Vargas tragedy [1]. The little one was saved because she was heard singing under the wrecks of her house, reduced to rubble by the rains that destroyed the town of Macuto. In addition, by that time Venezuela was already under the Chavista regime and repeated mandatory listening of the National Anthem had become an overwhelming recurrence in our daily lives. This is an extremely distressing action, both physically and psycho-spiritually—not only for me but also for the people who experience it.

I activated La Vaguada [The Trough] for the first time on the First Encounter of Body Arts (IARTES, 2005) at the Teresa Carreño Theater in Caracas. With nuances of criticism towards the circumstances of the time, it was certainly an imposing experience on a personal level due to the characteristics of the setting and the audience. That same year, I presented it at the XVI Carmelo Fernández Salon in San Felipe. At the beginning of 2009, I did it for the I.D. Performance event at the Centro Cultural Chacao in Caracas. With the help of filmmaker Marilyn Birchfield, I recorded this piece as a video-performance to participate as a guest artist at the FIA-Supercable Salon for Young Artists (2009), curated by Gerardo Zavarce. On March 2014, I presented it as a collective action for the public space of Plaza Altamira (Caracas), as part of a creative protest event by a group of artists invited by photographer Carlos Ancheta.

This proposed performance/art action is part of a creative personal investigation that uncovers the intuitive and mysterious aspects of being a woman. It is based on research on art as a set of rituals and on the reorientation of the body in space through visual experiences and movement. It is a performance based on curiosity about art as a healing tool.

[1] Translator’s note: The 1999 Vargas tragedy was a natural disaster caused by a trough that produced torrential rains in the coastal state of Vargas, resulting in massive floods with mudslides and debris flows that killed thousands of people and swallowed entire towns.

Consuelo Méndez (Caracas, 1952) studied in California, where she obtained a Bachelor’s and a Master’s Degree in Fine Arts. She was part of the group Mujeres Muralistas of San Francisco, CA, until 1976. She was an artist associate professor and researcher at Instituto Armando Reverón since 1991 and is now a retired professor from UNEARTES. Her work has received awards at the Michelena Salon (1983, 1981), Municipal Visual Arts Prize of Caracas (1984), and the TAGA Biennial of Graphic Miniatures (2004, 1990, 1982), among others. She has participated in exhibitions in countries such as South Korea, Bulgaria, Puerto Rico, Colombia, USA, Cuba, Mexico, and Poland. Her artistic production is ongoing, spanning painting, drawing and graphic arts, showing a special interest in the production of book-objects and works on paper.

The relationship between body and art becomes ever more relevant in her personal expression and pedagogy, setting the tone for her creative research process. She develops a pedagogical practice that integrates therapy and the arts. She belongs to Grupo Pielforma, a body-arts research lab.