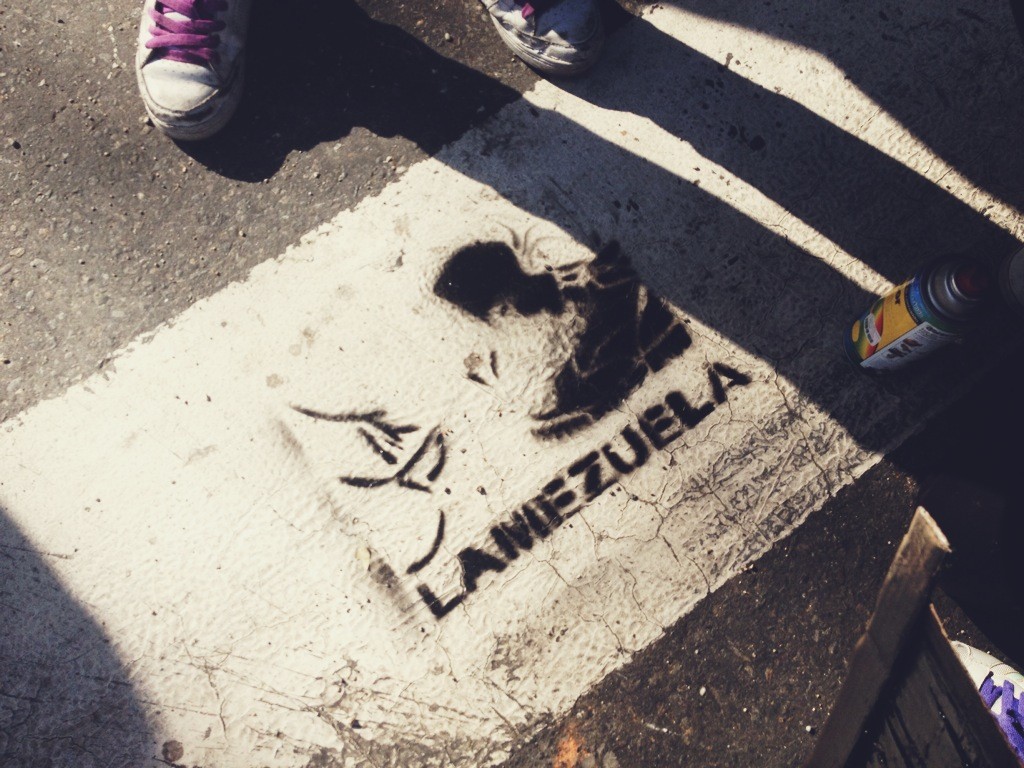 The boot obeys orders. The boot wants to vanish the protests until they are prohibited. The licked boot is tamed from below. Which of the two parts is, then, subjugated?

The sentences of the previous paragraph seem to be the strange transcription of a mathematical formula because they are, like language itself, a strategy of action and thought. The hypothesis came to me yesterday with the image of a stencil on my cell phone. Deborah Castillo and Érika Ordosgoitti had spent Saturday night preparing the Lamezuela [roughly, Solelicking] stencil. The plan was to spray-paint it at the epicenter of student protests the following day. «Let’s act from art,» she said to me, «I’m burning». I jumped from my chair and agreed to join them because the ardor was shared and I wanted to record the action. I could no longer go from Twitter to Facebook, from the home broadcast of some Chacao neighbor to speculations in clandestine media, from rumors to phone calls and silence. An incisive silence the size of fears. A void that caused me to go out to the sidewalk of my house looking for answers. How are things going? What do these kids want? Well, a livable country so they don’t have to hit the pavement. What these young people have at stake is a matter of freedom, and art is not deaf. We took to the streets.

I joined the Lamezuela action. Deborah Castillo, Érika Ordosgoitti, Rosa Chávez and I met at Plaza Altamira. They had already walked around some streets with the stencil. Some graffiti artists had a copy. Sidewalks, streets, traffic signs, gnawed murals, fleshy walls, webs, gaps (as the very search for meaning) were the target. Protesters stopped to read, the guys would tell the bikers «don’t step on it.» The people protected the fresh stamp of Lamezuela’s accusation: we are repressed. 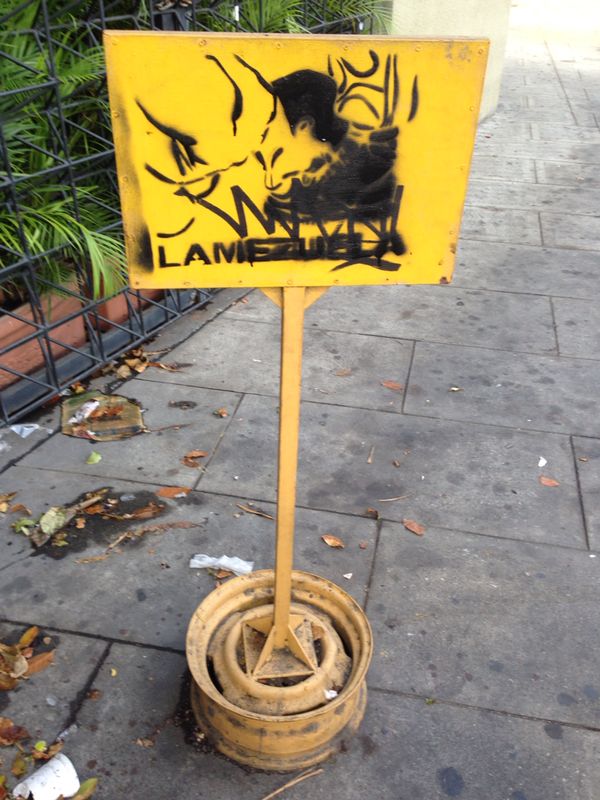 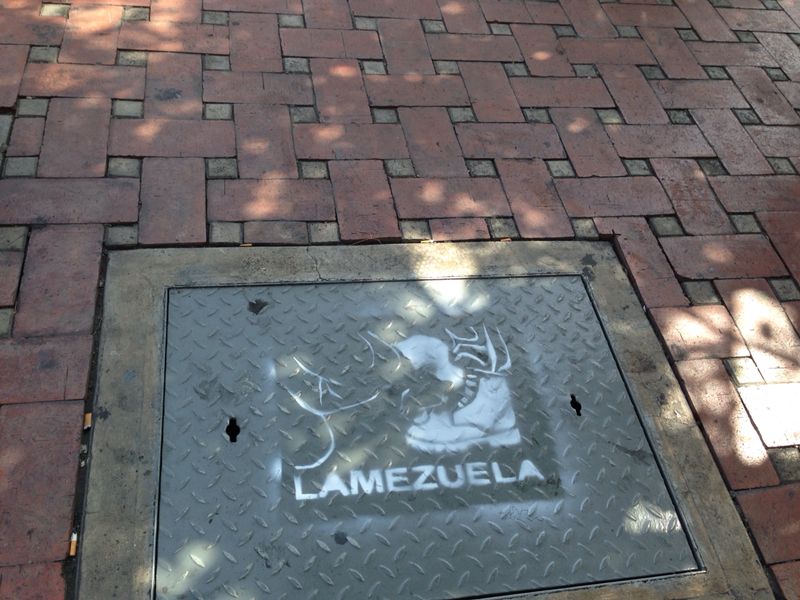 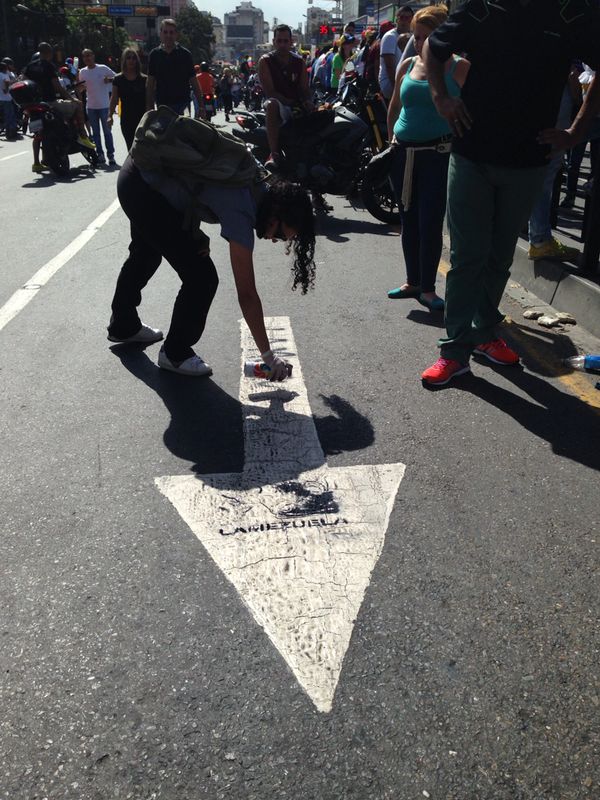 Such were the reactions of passersby: thoroughness. It is not an easy image to read: a tied woman, kneeling, licking the boot of a soldier. I noticed a few astonished viewers because the truth was exposed there, with the tongue sticking out and not exactly making fun of us, but bursting the metaphor of submission from the political, the social and the sexual.

We had to run twice in stampedes. Deborah ran with the wet stencil, Érika with the markers she used for writing—in perfect Palmer script—«Lamezuela Venezuela,» Rosa with the load of paint. Hundreds of young people behind us were coming from the entrance to the Francisco Fajardo highway. You obey the instinct of running for your life. We got two false alarms, but that was enough to lose our sleep. We decided to leave when the ladies and the families were retreating and the students arriving with their combo of vinegar, Maalox, and rage. 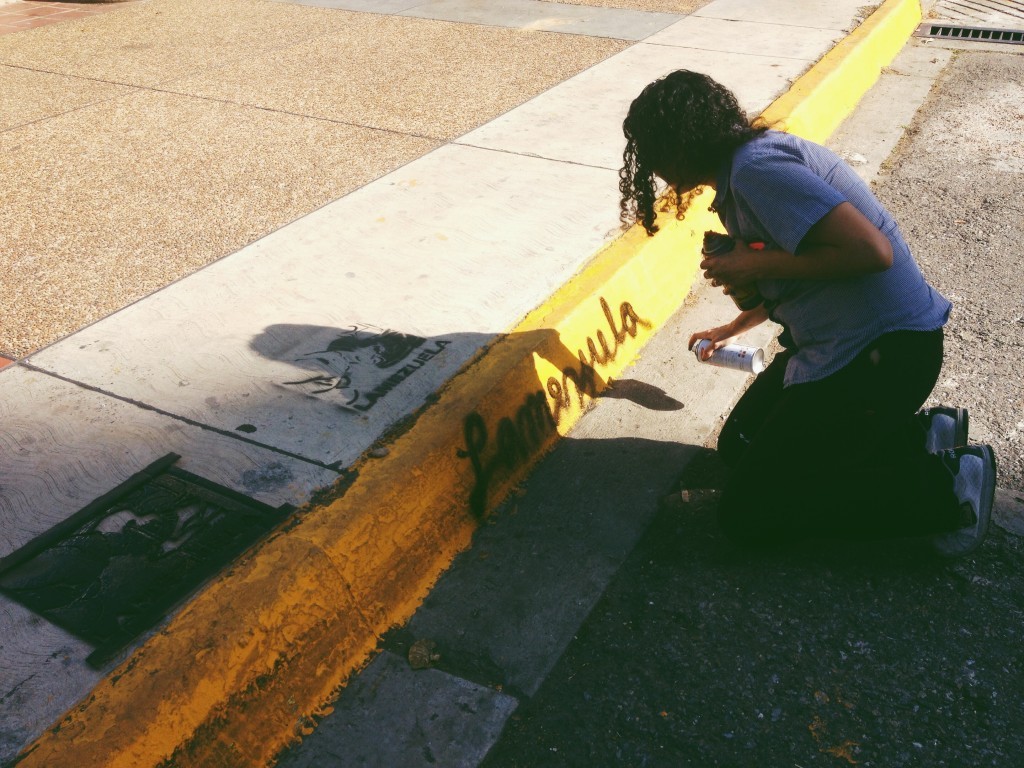 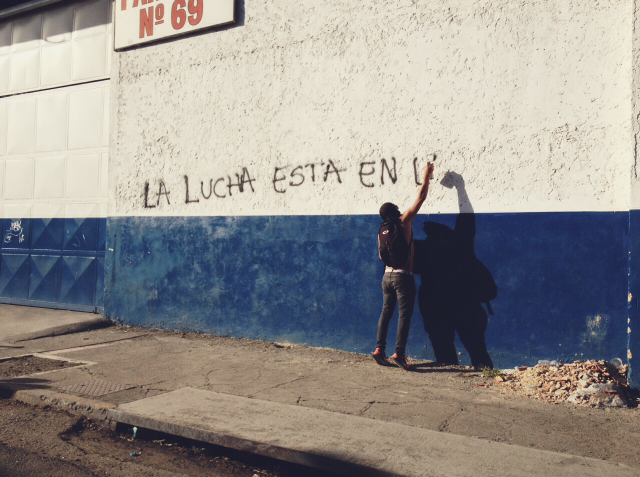 Bravery has few years of life. Before the barricade of guards, we felt the atmosphere getting tenser and tenser. The youngsters remained there, awaiting but contained. I did not see provocations or violent behavior. I saw boys staring at the guards to their faces, almost challenging them with each blink. Deborah, Érika and Rosa continued to spray-paint Lamezuela on the way back. They saw a potential frame for the message everywhere. 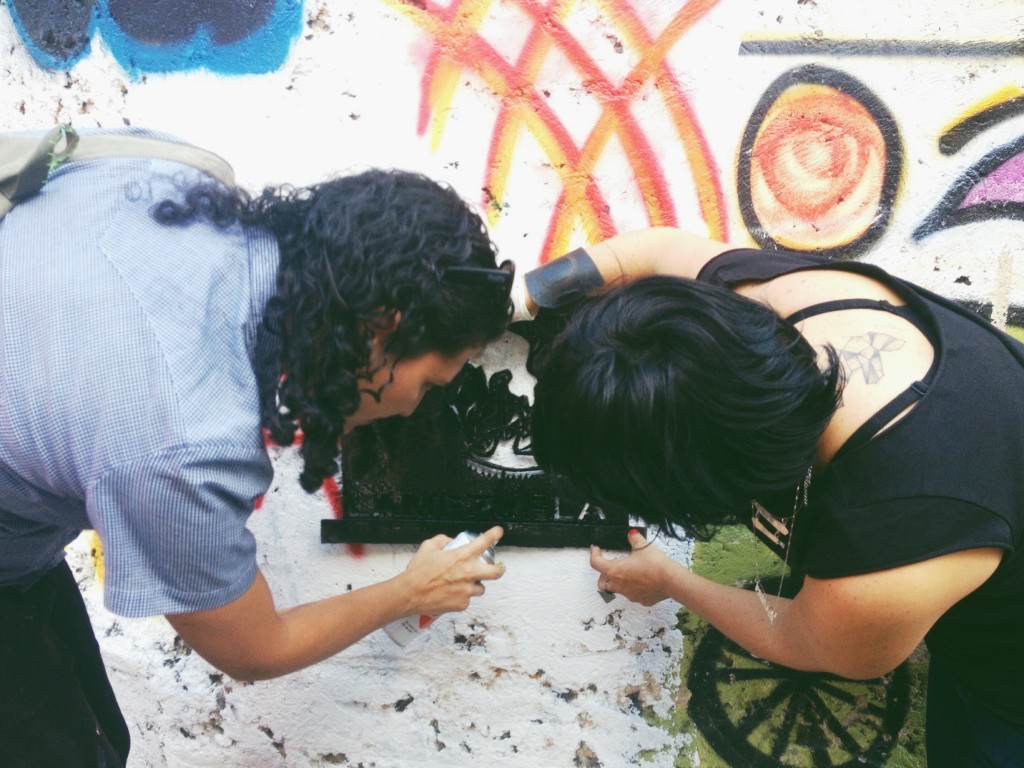 The boot obeys orders. The boot vanishes protests until they are prohibited. The boot is tamed from below by lappings. Which of the two parts is, then, subjugated? The government does not exercise repression because it is afraid, but to strengthen its authoritarianism.

He who follows his desire more strongly shall triumph. 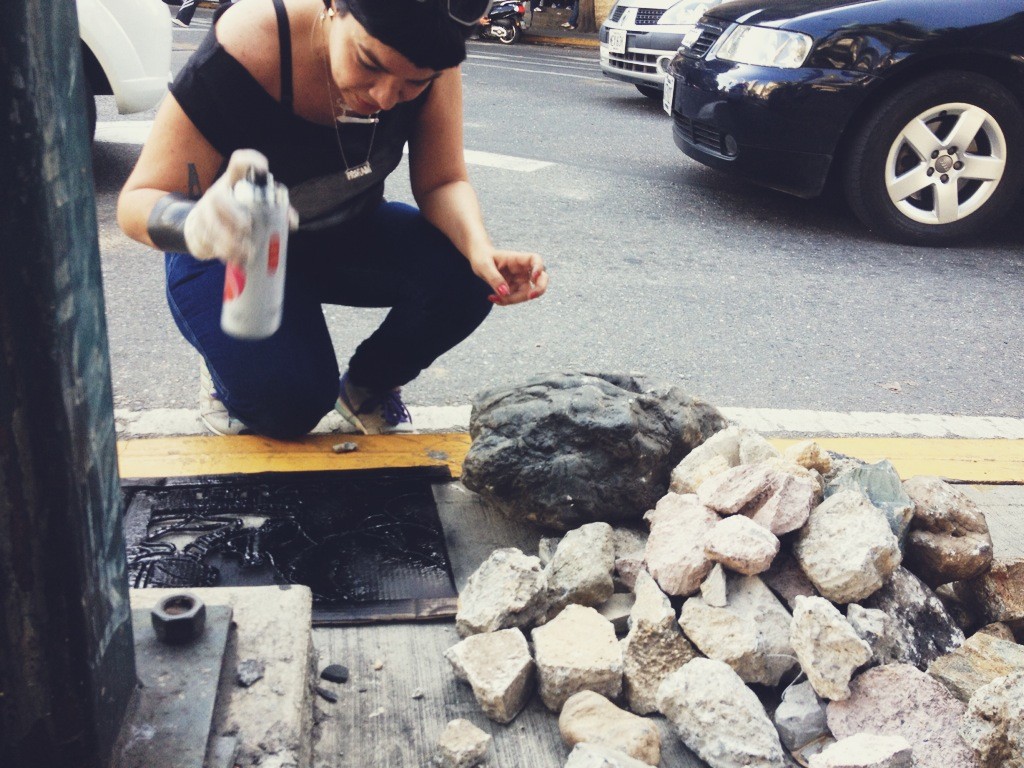